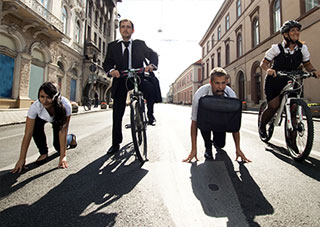 favour, you’re also likely to be less stressed more focused when you arrive, according to recent research from the UK.

Interestingly, however, the study, which analysed data from 18,000 commuters over 18 years, also found that those who use public transport reap similar benefits.

Study author Adam Martin, from the University of East Anglia’s Medical School, said ‘You might think that things like disruption to services or crowds of commuters might have been a cause of considerable stress. But as buses or trains also give people time to relax, read, socialise, and there is usually an associated walk to the bus stop or railway station, it appears to cheer people up.’

Time spent commuting was also found to affect mental wellbeing: ‘Our study shows that the longer people spend commuting in cars, the worse their psychological well-being. And correspondingly, people feel better when they have a longer walk to work’ Martin said.