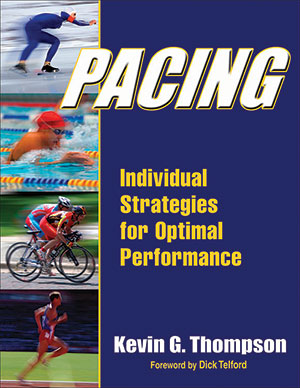 Review by Peter Lawler
Pacing, subtitled ‘Individual Strategies for Optimal Performance’, is a scholarly work written by scholars. There are 26 pages of references that attest to the fact of scholarship. Part I has five chapters that explain pacing science, strategies and philosophy. Part II has nine chapters that focus on the specific notion of pacing for swimming, cycling, speed skating, rowing, football, running, triathlon, squash/ tennis and basketball.

The objective of this book is to develop a closer relationship between sports scientists and coaches of specific sports. It attempts to meld practical experience to scientific knowledge to enhance tactical awareness.

Four authors are acknowledged in the Preface. Kevin G. Thompson, PhD is the director of the Research Institute for Sport and Exercise at the University of Canberra. He has previously worked at Northumbria University in the UK. Kevin is a section editor of the European Journal of Sport Sciences and has authored 120 peer-reviewed articles for scientific journals. Carl Foster, PhD is Professor of Sports Science at the University of Wisconsin and visiting Professor in the Research Institute, MOVE at the VU Amsterdam. He has been a consultant to US speed skating for 25 years. Richard Keegan, PhD is a Registered Practitioner Psychologist in both the UK and Australia. He is currently based at the University of Canberra’s Research Institute for Sport and Exercise. Jos de Koning, PhD is an Associate Professor at the Faculty of Human Movement Sciences at the VU Amsterdam. His expertise ranges from biomechanics to elite exercise physiology to speed skating. What a formidable team!

Chapter one asks the question ‘what is pacing?’ It is the distribution of energy during exercise. The goal of pacing is to achieve the desired outcome without fatigue interfering with the task’s completion. Achievement is dependent upon controlling the intensity of effort and the avoidance of fatigue that will destroy an intended performance. The alternative is also common. Due to ultra-conservative effort, an athlete may end a race with energy reserves that could have been utilised. Successful pacing is virtually invisible due to correct usage of energy resources. This astute judgement is called teleoanticipation. This is particularly relevant for sports with a known end point. Pace judgement can be practised countless times, and an internal template can be accurately constructed. Pacing is now recognised as a learned process which is required to develop a ‘sense of pace’ wrought from experience of racing and conscious strategic decisions.

Chapter two identifies six pacing strategies. Three are self-explanatory – all out, even, and variable. Three need clarification. Negative pacing is starting slowly then increasing pace over the course of the event. Positive pacing is starting fast, but not maximally, then slowing down as a result of fatigue. Parabolic pacing is starting fast, slowing in the middle phase, then accelerating to the end. The chapter fully defines the six and links the variants of pacing to specific circumstances encountered in the nine sports in focus. The physiology of pacing is thoroughly addressed in the third chapter. The most controversial issue is the central governor theory. Based on the accepted role of homeostasis, which is to maintain and control physiological systems within a normal range of exertion to avoid catastrophic failure, the governor theory is ‘there is a regulator in the brain’. In response to increasing stress, signals are sent from the brain via the nervous system to slow the heart rate and consequently the rate of exercise. A South African study claims this is a subconscious response by the brain to preserve homeostasis in all physiological systems, thereby keeping the body safe from harm. Interesting! This theory is much in dispute. There are countless incidents of athletes pushing themselves to the limit, to total collapse, to hyperthermia, to death. Where were the safeguards?

Speaking of the brain, the ‘Psychology of Pacing’ chapter is all about tolerance of pain and enduring suffering. Given the body wants to protect itself, the role of psychology is to deceive the brain. This brings us to the Merton Theory. The spirited debate has been the origin of fatigue. Scientists who identified the muscles as the source of fatigue have been labelled ‘peripheral’ fatigue theorists. Merton subscribed to a duality of muscle and brain origin of fatigue. This is the centralist theory. Chapter five is fascinating – so much conjecture. Moving on from fatigue debate (after all it is very tiring…) other performance enhancers are discussed, including the placebo effect, the comfort of endorphins, mental skills training and arousal control – all good stuff.

The final introductory chapter focuses on adaptation. The chapter has two formidable strengths. The first is a check list for developing an appropriate pacing strategy. The second is the thorough pacing advice called ‘considerations’ for sprinting; events lasting more than 40 seconds; middle and long distance to ultra-distance. This block of five advisory chapters is an outstanding prelude for Part II – ‘Pacing Applications for Sport.’

Each of the nine specific event chapters run for 10 pages or thereabouts. Chapter 12 – ‘Football’ addresses four codes: soccer, AFL, rugby and rugby league. This quartet is characterised by frequent bursts of energy expenditure and infrequent periods of dormancy. Research is limited on how best to pace a football game as each player is not in control of the game’s dynamics.

Tennis is different again. In tournaments players are seeded. The exertion is usually directly proportional to the talent of the opponent. Therefore stress levels rise during the elimination rounds. Chapter 9 is ‘Running’. It has a crack at pacing requisites in sprints to 400 metres. The bulk of the chapter dwells comfortably on the higher needs of races from 800 metres to marathon.

‘Pacing’ is a text to be respected. It is a courageous, ambitious, adventurous one that should be embraced by a multitude of sports coaches and scientists, whatever your sport.