Can you train clients with wildly conflicting values?

When a client’s shocking opinions conflicted deeply with his own, Simon Margheritini was faced with an ethical dilemma – to keep training his client, or to terminate the professional relationship. 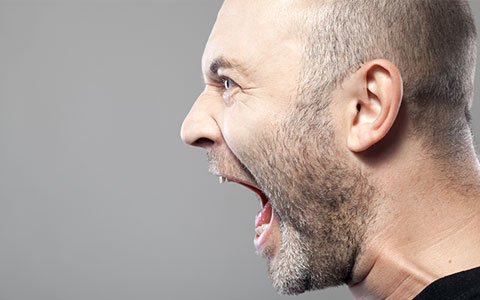 ‘At least there are now 50 less p**fters for us to worry about in the world’.

These were the confronting, homophobic words spoken by a client of mine as he re-gained breath following some walking lunges. It was the day after the Orlando massacre, where 49 people were killed in a gay club in the worst mass shooting in US history. Short of dropping the dumbbell on his foot in shock and horror, I was at a loss what to do. He wasn’t joking. I was hugely offended, not least because I train many gay clients. This type of interaction throws up a professional dilemma for personal trainers: when does the personal become too personal? Where do we draw the boundaries when a client’s values conflict deeply with our own?

The answer, for me, still wasn’t clear when the same client, some weeks later, lifted his vest to reveal a swastika tattoo. I felt extremely uncomfortable. I wanted to pretend I’d never seen it. This was clearly a very troubled individual and I wouldn’t have blamed a fellow personal trainer if they’d chosen to end this kind of bad relationship then and there. But I felt a niggling responsibility which I think many PTs sometimes feel.

This troubled client would come into my sessions angry, coiled up, stressed and ranting. And yes, those rants were often very offensive and the polar opposite of my world view. But he’d leave a slightly better man: less angry, smiling, personable even, as the endorphins kicked in. The training seemed to have a meditative, therapeutic effect on him. Sure, he was seeing visible results and losing weight. But he was leaving my studio with less hate in his heart and blood.

It was a reminder to me that what we do as trainers can be as much about the psychological as it is the physical. We sometimes risk downplaying that psychological aspect. I could see that, as his trainer, I was playing a part in sending him out into the world in this better state. I felt a responsibility to the world to keep this appalling hatred contained within the four walls of my small PT studio, for as long as I could.

It turned out, that was just a few months longer. His rants began to get more racist, more prejudiced and made me feel ever-more conflicted. I’m a trained PT, not a trained therapist. The line for me, the boundary crossed, was when he was rude and threatening to another client as her session was ending and his was starting. There was no need for it, and I asked him to leave.

This client example may sound extreme – he was the client from hell. In 18 years, I’ve very rarely not looked forward to training someone, so it’s a major cause for concern when it happens. But it does raise wider issues to consider, too. The environment in which PTs operate is unique, especially PTs with their own studio. It’s a raw, one-on-one experience over at least an hour. It means clients tend to confess things they may not reveal in the outside world. The chatter can be less filtered and more open, and while that can be a great thing, it can also lead to this kind of situation.

Training clients who hold different views and values from your own can be a rewarding and positive experience for PTs. It can create a fun, sparring relationship which gives you a platform to provide them with some brilliant motivational banter. It’s part of our professional responsibility to engage clients by developing a relationship with them. Very often, in my case, that comes from humour and playful but respectful repartee – if the chemistry is right. If the relationship is less jovial, it still requires getting to know the client better, which inevitably leads to some personal revelations.

For example, I have a client who says, if he were American, he’d vote for Donald Trump. He knows it’s a controversial view here, and he welcomes me challenging him on it, in between sets. It’s a completely different relationship to the one I had with Mr Swastika tattoo. I look forward to training him as we have a healthy debate which gets both of us out of our filter bubbles and echo chambers. Our spirited conversations feed into our training as I use the playful arguing to give him a motivational push: ‘You’re as lazy as Donald Trump’s policies! Do ten more reps!’. I get to put myself into someone else’s shoes and he gets to get ripped – win/win. I just hope he never gets the US green card.

Avoiding tension is key here, and keeping conversations to a minimum helps when you know a boundary may be crossed. Having background music (I let my clients plug in their Spotify playlists) helps to diffuse any awkward silences. And really, clients should be too out of breath for lengthy debates – but stretching time provides a good opportunity to chew the fat.

Sometimes I have to remind myself to keep a professional distance from the taboo subjects that come up that you’re not supposed to discuss in polite company (politics, religion, sex). Then again, depending on the client, sometimes I rip up that rule book, especially when I suspect the banter, chemistry and sparring we have is what keeps them motivated and coming back.

I’ve asked myself what I would have done if Mr Swastika had never been rude to my other client. Would I have kept training him, or ended the relationship, and would I have been open about why? In all honesty, I would have had to end it sooner or later: it was causing me stress and he was becoming unbearable. I think, though, that I would have told him that I had to reduce my PT hours because I was taking up a course, perhaps in psychotherapy. A white lie to save my professional integrity and motivation at work – and from having to hear from Mr Swastika again.