Could your tired client be iron deficient?

If clients are tired, breathless and unable to sustain activity before they even start training with you, they may be lacking in one critical mineral. 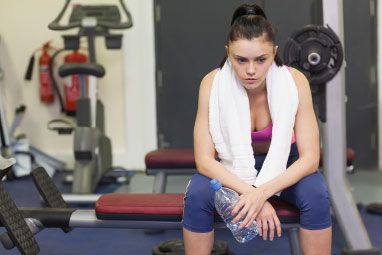 Ever been so tired that going about your daily activities seems like a chore? Imagine feeling like this all the time and then trying to keep up an intense training routine. Could the reason for feeling like this be iron deficiency? As a female vegetarian with a good training routine, I know the feelings of iron deficiency all too well. You have every intention of training, but you’re so tired that even the thought of driving to the gym is exhausting…

Iron deficiency can be one of the causes of ongoing fatigue and impaired performance. Prolonged iron deficiency can also lead to anaemia, a condition defined by a deficiency in the number and quality of red blood cells. Common symptoms of iron deficiency include a lack of energy or weakness, irritability, inability to concentrate, shortness of breath, paleness, dizziness and even bizarre cravings to eat things as strange as ice or dirt (more common in iron deficient pregnant women than in the average gym goer).

As a PT you are not trained to diagnose iron deficiency, but being aware of the symptoms, understanding a bit more about it, and knowing which clients are at greater risk is useful – and may help explain what is hindering your client’s progress.

What is iron and how does deficiency affect exercise performance?

Iron is a trace mineral. The body cannot make it, so we need to consume it in food. Iron is involved in numerous bodily processes, including oxygen transportation, enzyme reactions and immune system function, among others.

During exercise, having sufficient energy and the ability to breathe properly greatly impacts performance, and therefore the desire to continue training. Although there are several reasons for feeling tired or breathless, such as insufficient rest, dehydration and poor nutrition, iron deficiency is another potential cause.

So why does a lack of iron have this effect? The body uses red blood cells to transport oxygen to and from our lungs, to our cells and to remove carbon dioxide. Iron is used to produce these red blood cells, and is also involved in the oxygen transport process. Red blood cells contain an oxygen transport protein called haemoglobin, in which up to four iron molecules are embedded (muscles have another oxygen transport protein called myglobin which receives oxygen from the haemoglobin). Iron not only gives red blood cells their red colour, but also serves the important purpose of binding oxygen. Once oxygen is bound, it can be taken to and from our lungs to our body and muscle cells. Once oxygen is delivered, the iron binds to the waste product, carbon dioxide, taking it back to the lungs to then be exhaled. Iron’s role in energy and breathing, therefore, is critical.

And why is getting enough oxygen so important? You need a constant supply of oxygen and glucose to produce the energy your body needs to keep your heart pumping, lungs inhaling and exhaling, and cells, muscles and organs functioning. Exercise increases the metabolic rate and energy needs of muscles. The more you move, the more energy you require and thus more of the energy molecule ATP (adenosine triphosphate) must be produced, which requires more glucose and oxygen. If you don’t have enough iron, then less oxygen will circulate around your body and be delivered to your cells to produce the needed ATP, leaving you tired, breathless and unable to sustain activity.

Who is likely to get iron deficiency?

Iron deficiency can occur in both men and women, but is more common in the following clients:

How much iron is needed and which foods contain it?

Iron requirements depend on age and gender. Adult females aged 19 to 50 require around 18mg per day, while adult males and females over 51 years require around 8mg. Athletes or clients with very intense training schedules, in particular females, vegetarians and adolescents, may require between 1.3 and 1.8 times more iron than the average person. This can be difficult to achieve for those on lower kilojoule diets.

Two types of iron are found in food, haem and non-haem. Both are absorbed in the small intestine, but absorption differs.

Should my client take iron supplements?

Clients who have been diagnosed by their doctor as iron deficient can follow medical guidance and take iron supplements to get their levels back to normal. Too much iron can be toxic, however, so it’s not your place to advise clients to take supplements. If your client has a poor diet, you can also recommend they visit a dietitian to help them improve their diet and put together a suitable meal plan.

Gloria Cabrera is an Accredited Practicing Dietitian and personal trainer with Nutrition Savvy. She is passionate about food, nutrition, fitness and helping people make permanent dietary and lifestyle changes. nutritionsavvy.com.au