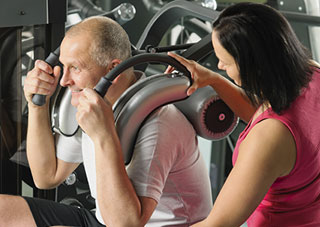 As we age our bodies become slower and less agile, our memory fades and our mental alertness declines. While this deterioration of mind and body is a natural part of aging, it can be very difficult to accept, and it can affect our ability to perform previously simple daily tasks.

The countless products and strategies designed to improve cognitive ability often make it difficult to determine the most effective ways of keeping your mind and body a little ‘younger’. In some cases, the information available may be contradictive; meaning that there is no black and white answer when it comes to what we know about some aspects of human health.

Regular physical activity is often touted as an effective way of slowing cognitive decline and improving mental flexibility. A recent study, published in the journal PLOS ONE, infers that older adults who regularly engage in moderate to vigorous physical activity have more variable brain activity at rest than those who do not exercise; indicating a higher cognitive performance.

University of Illinois postdoctoral researcher Agnieszka Burzynska explained that the study involved 100 adults between the ages of 60 and 80. The researchers used accelerometers and MRI’s to measure the physical activity and blood oxygen levels in the brain over the course of a week. According to Professor Burzynska, the results revealed that the more active adults had a higher level of brain activity; indicating increased cognitive flexibility and function.

However, a similar study, conducted over a two-year period reached a very different conclusion, claiming that moderate exercise did not improve cognitive function in people aged between 70 and 89 years or lower their risk of developing dementia.

Dr Kaycee Sink, medical director of the Kulynych Memory Assessment Clinic at Wake Forest School of Medicine in New York, explained that she and her colleagues ‘found no significant difference in mild mental impairment or dementia among those who participated in physical activity.’ Sink acknowledged that this result is contrary to what many people believe about the role of physical activity in preserving and even improving memory and cognitive function.

These two opposing findings highlight the difficulty of uncovering a fixed method or strategy when it comes to some aspects of health and fitness. Nevertheless, it is important to engage in regular physical activity at all ages, including during your later years, as there are numerous health benefits including improved heart health and reduced insulin resistance.

Source: PLOS ONE & Journal of the American Medical Association