Proponents of training on unstable surfaces argue that it can increase muscle activation, improve proprioception and balance, and improve neuromuscular control. What does the research say?

The fitness industry is very good at embracing new methods and ideas related to training styles and exercise options. Over the last decade there has been a real shift from traditional methods of training, inclusive of resistance training, to a variety of methods that are considered more ‘functional’ or even more ‘holistic’ in their nature.

Activities that include a balance or stability component have become commonplace, with some ‘developing’ to the point where they are bordering on dangerous. Instability training has many aspects, but broadly describes activities in which the individual is required to maintain control over their body position while it is being challenged by a destabilising device or technique.

The definition of ‘instability’ is a loss of stiffness, and joint instability is a lack of support or control of joints, which puts the individual at risk of joint displacement or dislocation.

Several arguments have been put forward in support of exercising on a surface that is less than stable. These include increased muscle activation, improved proprioception, better neuromuscular control and improved balance coordination. Let’s look at some key points that research has definitively shown to be true about some of these arguments.

Key Point 1: Balance training does not transfer to different tasks

In a major systematic review and meta-analysis paper published in March 2016, Kummel et al. conclude that balance training will only improve the performance of the balance tasks being trained. The transfer of these improvements to different tasks was very small or non-existent. Even when the task involved a similar body position or similar balance demands, the transfer did not occur in any substantial manner. Giboin et al (2015) found likewise, stating that even when the device and direction of change was similar, there was little transfer of performance between tasks.

Balance board training has been shown to reduce injury risk, but only when the participant has had a previous similar injury, with Peterson et al. (2013) finding that proprioception training of the ankle reduces risk of another ankle sprain. An important side note here is that the sensory feedback loop for an automatic postural adjustment is approximately 70-120 ms and the functional response is 120-180 ms. Injuries such as ankle sprain occur in a timeframe of 40-50 ms after foot contact with the ground. That’s to say, the speed at which injuries occur is faster than the body’s ability to prevent them occurring. Balance training cannot improve these times and prevent these happening, regardless of how good your balance or stability is.

Balance training does appear to assist the elderly in reducing the risk of falls, though Mansfield et al. (2015) note that the optimal dose of this type of training is still unknown. However, there appears to be value in doing a block of balance training with groups such as the elderly and those with Parkinson’s, and then doing a booster of this type of training after the initial period to maintain the initial gains achieved. Rossi et al. (2013) reported that after six weeks, the gains achieved from balance training was lost, hence the proposal that booster sessions may be of tremendous value.

It appears that balance training, and the body’s need to be able to adjust its position in response to a change in balance, is so specific and complex that unless the activity being trained is an exact replica of the environment required, very little improvement in performance will carry over.

General balance tests, such as one leg stance, may also have little value in determining a person’s overall skill in maintaining balance. Certainly, if you choose to assess a person’s ability to balance using the single leg test, you need to be aware that the activity you have them do to improve this will affect the outcome. Simply put, if you want someone to be better at single leg balance tasks, have them practice single leg balancing. 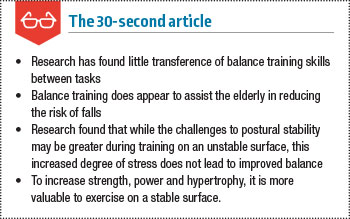 In 2015, a systematic review and meta-analysis on elite participants was published in Sports Medicine by Behm et al. The review showed that strength training on a stable surface resulted in 29 per cent greater force output than training on an unstable surface. It also pointed out that while the challenges to postural stability may be greater during training on an unstable surface, the results of the review demonstrate that this increased degree of stress does not lead to improved balance. The paper concluded that the lower force and power outputs, as well as the decreased movement velocity and range of motion associated with unstable surface training, may result in less rigorous strength and power training adaptations.

Essentially, this means that if you wanted to increase an elite individual’s strength, you should get them to perform the exercise on a stable surface. The Canadian Society for Exercise Physiology supports this with its position stand from 2010 in which it states; ‘From a performance standpoint, unstable devices should not be utilised when hypertrophy, absolute strength, or power is the primary training goal, because force generation, power output, and movement velocity are impaired and may be insufficient to stimulate the desired adaptations, especially in trained athletes.’

However, Behm and colleagues suggest that in non-elite participants, unstable surface training may have functional health benefits. The 29 per cent reduction in force output (force deficit) when training on an unstable surface may actually be of benefit, as the lower forces that the individual can produce on an unstable surface might decrease training-related injuries and be of value in rehabilitative environments. Children or novices might be target groups for this type of training, as these populations would be better suited to having their neuromuscular patterns challenged, than having a focus on training load.

The use of unstable platforms has also shown an increase in muscle activation (EMG) due to the stabilising function. Behm et al. suggest this may also be of value in novices because, as the muscle activation levels are higher, the loads required to achieve this effect are lower. Willardson et al. (2009), however, showed that EMG activity in muscles used for squats, deadlifts and overhead presses were not that different, with muscle activation on unstable surface being only 7 per cent higher than on a stable surface.

In summary, the research suggests that in most cases training on an unstable surface provides less value than a stable platform when aiming for the usual strength, power and hypertrophy outcomes. However, there may be some functional health gains and safety-related benefits that should be researched further before real values can be assumed.