Kettlebell routines feature in many clients’ exercise programs, so how does this form of training stack up against other methods? 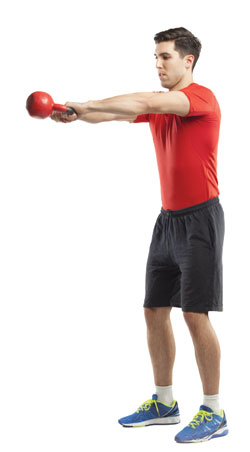 Fitness professionals have an array of training tools and styles available to use in exercise prescription. While many of these create interest and provide variety for clients, it can be challenging to keep abreast of how effective each practice is. In this series of evidence-based articles, we summarise the latest research on a range of training tools and styles to help you better serve your clients. Here, we look at kettlebell training.

Several recent studies have suggested that kettlebell (KB) training has a positive effect on the cardiovascular system. However, most are acute studies comparing measures or short term interventions with low numbers.

Farrar et al. (2010) showed that completing as many two-handed KB swings (16kg) as possible in 12 minutes (265±68) achieved an average VO2 of 34.31 ± 5.67 ml.kg-1.min-1 and an average HR of 165 ± 13 b.min-1. This was equal to 87 per cent of the %HR max and 65 per cent of the %VO2 max achieved on the graded exercise test to exhaustion for the determination of VO2 max on the treadmill. Even though the research only used 10 recreationally active college-aged males, the overall values suggest that such a training protocol may be useful for improving cardiovascular fitness.

Using RPE to compare treadmill and KB swings, Hulsey et al. found that for their 13 subjects (11 males) treadmill running produced greater oxygen consumption, METS, pulmonary ventilation, and calorie expenditure than KB swings. The protocol consisted of 35 seconds of KB swings followed by 25 seconds rest for 10 minutes with a follow-up treadmill run of 10 minutes on another day equal in RPE to the KB workout. This protocol shows greater benefit to treadmill running than KB protocol used in this project.

In comparison Thomas et al. (2014) found that a KB routine (30-minute KB session that included 3 continuous 10-minute sets of 10 KB swings followed by 10 sumo deadlifts, followed by 3-minute rests between 10-minute exercise periods) produced similar metabolic responses to those of a moderate-intensity treadmill walking protocol (30-minute treadmill regimen that began at the walking speed and 4 per cent grade that matched the VO2 from the KB session followed by 3-minute rest intervals after 10-minute exercise periods) designed for the improvement of aerobic fitness in novice exercisers. The number of participants was again small (5 males and 5 females) and the participants were novices.

Falatic et al. (2015) also studied the effects of KB training on aerobic capacity for seventeen female collegiate soccer players. The intervention involved three sessions per week for four weeks with half the group doing 20 minutes of KB snatching with 15 seconds of work and rest intervals, and the other half of the group doing multiple free weight and dynamic bodyweight exercises as part of a continuous circuit program for 20 minutes. The authors reported that the KB group improved their VO2 max by 6 per cent and the circuit group achieved no change.

The reality is that many fitness enthusiasts would be challenged to sustain 12 minutes of continuous KB swings (Farrar et al study) at an average of one swing in every 3 seconds, or 20 minutes (15 sec on and 15 off – Falatic et al. study). Working at 65 per cent of your VO2 max during treadmill running or cycling, however, would be easier to achieve for the same cardiovascular benefit. There is no doubt that the KB swings or snatches provide additional benefits outside of cardiovascular improvement, but trainers should consider this in the context of the fitness of their clients. I can see direct benefit in utilising KB exercises in tandem with traditional cardiovascular training and mixing the two in the form of a circuit or intervals with the KB swings being used as the higher intensity due to increased %HR and the cardio being used as lower intensity in the intervals. While current evidence suggests there is value in KB training towards improving cardiovascular fitness, further research with greater numbers and longer interventions is required for us to better understand the real value of this activity for aerobic fitness.

Effect on strength and power

There is significant evidence to show the value in using KB to develop both strength and power across a number of different performance measures.

Manocchia et al. (2013) compared 23 middle-aged participants with a control group of 14. The KB training intervention was a 10-week program of two sessions per week broken into five blocks of four sessions, each with a different focus. The control group maintained normal daily activity which was not described. Participants were tested for a 3-repetition maximum (3RM) bench press, 3RM clean and jerk, a maximal vertical jump and repeated 45o back extensions to volitional fatigue both pre and post the 10-week program. The participant group varied significantly, perhaps reducing the value of this research. For example, the range of weight lifted varied between the intervention and control group for bench press (45-215 to 20-79kg) and clean and jerk (30-145 to 9-59kg) showing a major range difference in training load and hence training experience between the intervention group and control group. The results showed there was no significant change in performance of back extension and vertical jump, but there was for bench press and clean and jerk.

A study comparing the effects of weightlifting versus kettlebell training on vertical jump, strength, and body composition by Otto et al. (2012) showed that traditional weight lifting training was more effective at improving strength than KB training. The 10-week study comprised two sessions per week for six weeks. The KB group still showed positive changes for vertical jump, back squat and power clean. However, changes achieved from traditional weightlifting were greater for back squat than for the KB group.

Lake and Lauder (2012) compared the changes in half squat 1RM and vertical jump between two different protocols, jump squat training and KB training, over six weeks with two sessions completed each week using 12 male college-aged participants matched for half squat 1RM in each group. The KB group performed 12 rounds of 30-second swing exercise alternated with 30 seconds of rest, and the jump squat group performed at least three sets of three jump squats (depending on load) with the load that maximised peak mechanical power applied to the centre of mass (CM). Results showed that half squat 1RM increased by nearly 10 per cent and vertical jump power increased by nearly 20 per cent, yet there was no difference between the two different training groups, showing similar changes in performances.

There is plenty of evidence now to show that KB training can improve strength and power, yet there is also an agreement that the more traditional forms of weightlifting are more effective. My take on KB training is that it may be an effective alternative to traditional training as a means to provide variety in programming for those that need stimulation or something different.

Perhaps, therefore, KB training would be most effective for experienced and long term clients who have used traditional methods for a while and might get a different stimulation and training effect from using different exercises. If you do want to train novices with kettlebells, just remember that more effective gains have been found with traditional methods.

In summary, there is now mounting evidence to show the value of KB in training programs, and if used in similar ways to that shown in the research will provide variety and stimulation to a training program.