The continued growth in popularity of both Pilates and yoga prompts the question, how effective are these mind body disciplines?

Neither yoga nor Pilates are new practices, but their presence within the fitness industry has never been greater. While club timetables vie with ever proliferating dedicated studios for their share of the mind body market, the question arises of just who should be practicing these disciplines – and for what outcomes?

First under the microscope is Pilates. 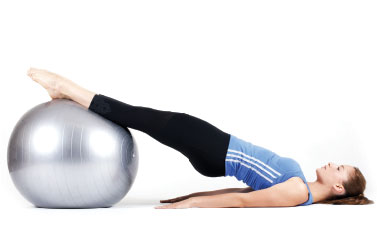 A systematic review by Wells et al. (2012) suggests the literature defined Pilates as a ‘mind body exercise that focuses on strength, core stability, flexibility, muscle control, posture and breathing.’ Pilates emphasises control of both body position and movement and was originally called ‘Controlology’. The authors of this review identified several repeated principles that are commonly found in Pilates, namely ‘centring’, concentration, control, precision, flow, and breathing.

Due to the broad range of peer reviewed publications on Pilates, I am fortunate to be able to draw on both systematic and literature reviews to discuss the use of this discipline.

In 2011, Cruz-Ferreira et al published a systematic review in this area, but when determining value of the studies confirmed there was a low scientific rigour on all papers. These studies ranged in length of intervention and frequency of sessions per week, and involved both mat and reformer methods. However, none of the studies assessed for their review involved any follow up after the period of intervention, so the long term effectiveness of any of these changes is, as yet, unknown. In this review, Pilates was shown to improve flexibility (strong evidence for its effectiveness), dynamic balance (strong evidence) and muscular endurance (moderate evidence) in healthy people. There was limited or no evidence to support its effectiveness in changing or improving tranversus abdominis thickness, blood pressure, abdominal strength, postural alignment, body composition or vertical jump. In most cases the quality of the research was the limiting factor, and until better research methods are applied, it will be difficult to conclude the true value of Pilates in these areas. Finally, a systematic review by Aladro-Gonzalvo (2012) reported there was poor evidence indicating a positive effect of Pilates on body composition. 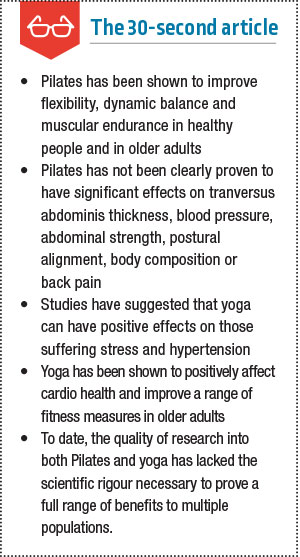 Effects on back pain

A systematic review and meta-analysis conducted in 2011 by Choon Wyn Lim and colleagues resulted in only seven quality research papers in this area. Their analysis reported that Pilates-based exercise was better for pain relief than minimal interventions, but did not support the superiority of Pilates over any other form of exercise in reducing non-specific low back pain. However, the authors again acknowledge the low quality of studies available. Another 2011 systematic review (Pereira et al. 2011) provided similar outcomes and concluded that there is poor evidence to show that Pilates improves pain or functionality of people with low back pain. In fact, movement-based interventions have been shown to be infrequently effective for changing observable movement patterns. Further, a relationship between changes in movement patterns and improvement in pain or activity limitation was also infrequently observed (Laird et al. 2012).

A 2013 meta-analysis by Aladro-Gonzalvo et al. confirmed similar outcomes, with no evidence to show Pilates was more effective than any other therapeutic treatment, and moderately superior to no treatment at all in improving disability and providing pain relief. The authors caution readers on the use of Pilates in this area and suggest the optimal implementation of Pilates in cases with non-specific low back pain is unclear.

A more recent review into the effectiveness of Pilates in older adults by Bergamin et al. (2015) provides several clear and positive outcomes. There was good evidence to show the effectiveness of Pilates on improving strength and maintaining this over long periods, improving dynamic balance, improving flexibility and range of motion as well as improving walking and gait. The authors conclude that Pilates may be worthwhile as an activity to prevent falls in the elderly for all these reasons. There is more support for the value of Pilates improving balance and preventing falls in older adults in the systematic review by Bird et al. (2015). 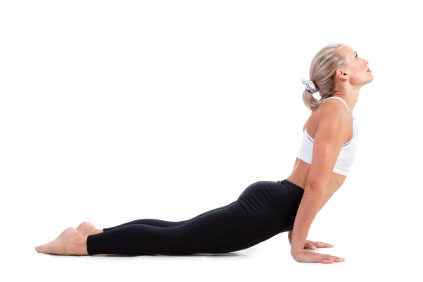 Next up for evaluation is yoga.

Most studies suggest yoga can produce positive changes in psychological and physiological outcome measures related to stress (Sharma 2014). A further review by Tyagi and Cohen (2014) also concluded that yoga may be an effective therapy for hypertension, but also pointed out that, due to the broad range of yoga practices, it may be difficult to determine which specific form of yoga may be most effective.

An extensive review of the effects of yoga on risk indices associated with insulin resistance by Innes et al. (2005) provided evidence for the value of yoga as a tool to improve glucose tolerance and insulin sensitivity, lipid profiles, anthropometric characteristics, and blood pressure in both healthy populations and those with chronic Insulin Resistance Symptom-related conditions. However, few quality studies have been completed on the effects of yoga on cardiovascular-related risks.

A 2014 systematic review on the effects of yoga on cardiovascular disease by Cramer et al. agreed with previous reviews and revealed good evidence for clinical improvements in blood pressure, heart rate, respiratory rate, abdominal obesity, blood lipid levels, and measures of insulin resistance. The authors suggest a significant bias in this research, yet agree that due to its apparent safety, yoga may still be considered a useful intervention for healthy participants and patients with increased risk of cardiovascular disease.

Roland et al. (2011) reviewed the effects of yoga in older adults and reported that it has moderate effects on physical fitness and function. The literature supporting yoga for improved fitness in older adults reports improvements in gait, balance, strength, flexibility, and anthropometric measures as a result of practicing yoga.

Again, the underlying message from all yoga research reviews is that the quality and quantity of future yoga-intervention research needs to be improved before formal exercise dose recommendations can be made.

While there have been no systematic reviews of Bikram yoga, some research has been published. Bikram is a vigorous form of 26 yoga postures performed in a heated room. The postures are held for extended times and require forceful and well-controlled muscular contractions. The rapid transition between postures and the effects of the environmental heat stress produce a cardiovascular response and cause muscle fatigue. Tracy and Hart (2013) assessed isometric deadlift strength, handgrip strength, lower back/hamstring and shoulder flexibility, resting heart rate and blood pressure, maximal oxygen consumption (treadmill), and lean and fat mass (dual-energy x-ray absorptiometry) after 24 sessions of 90 minutes duration in an 8-week intervention. The intervention group showed increased deadlift strength, increased lower back/hamstring and shoulder flexibility, and modestly decreased body fat compared with a control group. There were no changes in handgrip strength, cardiovascular measures, or maximal aerobic fitness.

Another study by Hunter et al. (2013) found that a similar intervention to that applied by Tracy and Hart improved atrial stiffness and reduced insulin sensitivity in young but not older adults. It was also reported that the extreme heat and intensity of the Bikram yoga practice may make this style of yoga inappropriate for older adults and people with medical conditions (Cramer et al. 2013).

Cramer et al. (2013) reports 76 cases where adverse events occurred in yoga. Cases related to musculoskeletal system (35.5 per cent), nervous system (18 per cent), the eyes (12 per cent) and mixture of other injuries (34.5 per cent). The yoga practice that was most often associated with reported adverse events according to published literature was Pranayama, or yoga breathing, with four papers, followed by Hatha yoga and Bikram yoga with three papers each.

Given the extensive number of yoga classes offered worldwide, this is a very small number of reported cases where adverse events or injury occurred. Cramer does recommend that beginners should avoid the more advanced yoga poses such as lotus or head stand positions and some of the advanced breathing techniques such as holding or forced breathing.

The literature supports the use of both Pilates and yoga in some situations and populations for specific outcomes. However, it appears that due to the generally low quality of research in these practices that a broad ranging value of each discipline cannot be applied – that’s to say, neither can conclusively claim to deliver a wide range of benefits to all populations. Within the fitness industry certain training methods can become popularised and gain a reputation as a ‘one stop fix-all activity’. While both Pilates and yoga do have some proven benefits, the evidence for both practices has yet to be fully realised, and fitness professionals should be measured in what they use each technique for, and take caution when promoting the potential value of each to their clients.

MORE?
Read this article ‘Pilates vs Yoga – What’s The Difference?‘