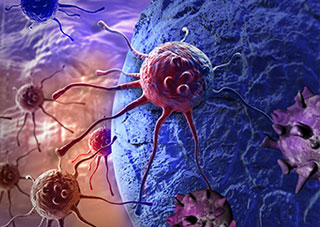 Spot reduction of fat has widely been denounced as a myth – but what about spot reduction of tumours? An exercise program that targets the muscle around cancerous tumours could be the latest weapon in the fight against the disease.

Edith Cowan University researchers are investigating if the growth of cancerous metastatic bone tumours can be slowed by providing targeted exercise directly to tumour sites.

The world-first study will recruit twenty men with advanced prostate cancer which has spread to their spine.

The men will be prescribed an individually tailored and carefully supervised aerobic and resistance training exercise program that will also directly target and stimulate the muscle surrounding skeletal tumour sites.

Lead researcher Dr Nicolas Hart said previous studies had shown that targeted exercise was effective in changing tumour biology, while also effective in suppressing tumour growth in animals. However, this concept has yet to be trialled in humans.

‘We know that exercise is hugely beneficial for people suffering from cancer in many different ways, but this will be the first time we have tried to target the exercise directly to the part of the body where tumours are growing in bone’ he said; ‘As well as the potential to interfere with tumour growth, it is expected that the targeted exercise will also help alleviate bone pain as well as preserve muscle and bone mass in patients.’

Dr Hart said until recently it was not considered safe for patients whose cancer had spread to their bones to exercise.

‘Recently, ECU Health and Wellness Institute researchers Professor Robert Newton and Professor Daniel Galvão developed a safe exercise program for patients with bone cancer, a world first in exercise oncology’ he said; ‘The focus of their program was to modify the exercise prescription in order to minimise physical loading of bones containing sclerotic lesions, which was found to be very safe and highly effective. However, we are now expanding on this success by including targeted exercise into the program with the expectation that we will be able to reduce tumour growth and improve patient outcomes.’

Exercise & Sports Science Australia (ESSA) has committed $15,000 towards the study through the awarding of the 2015 Clinical Exercise Physiology Research Grant.

ESSA President Nathan Reeves said the research had the potential to greatly improve the lives of cancer patients: ‘This is a world first trial in humans, which may have considerable implications to other types of advanced cancers in prolonging survival while maintaining quality of life and physical function’.

ECU’s Health and Wellness Institute was established in 2003 as a research centre focused on examining the role exercise can play in improving the lives of people with chronic disease such as cancer. The Institute has co-authored International Clinical Guidelines by the American College of Sports Medicine on exercise for cancer survivors.