Fingers burnt, lessons learnt – A cautionary tale from the world of fitness franchising

Earlier this year the team at New Zealand chain Club Physical experienced what many club owners would consider a nightmare. To help ensure other fitness business owners don’t find themselves in a similar situation, Paul Richards recounts the events that led to him fighting to retain control of the brand he had built from scratch. 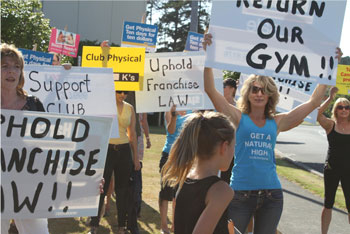 I founded Club Physical in 1981 when I renovated an old athletic club. The early years involved incredibly long hours, no days off, and no salary to speak of – it’s a story familiar to many passionate fitness professionals who have pursued their vision of opening their own club. Since then, Club Physical has grown to become one of New Zealand’s largest privately owned health club groups, employing around three hundred people at 10 locations, several of them franchises.

Three years ago the franchisee at Botany requested to sell his location to a visiting South African contact, Stuart. My wife (and Club Physical co-founder) Tina and I met with Stuart and his wife and they seemed like a nice couple. Stuart said that he was a successful businessman in South Africa, employing over 8,000 staff, but like many of his countrymen he was eager to leave and to apply for New Zealand residency. As part of this application, it was vital to Stuart that he had our support and that he was able to have a positive impact on the business. After consideration, we gave the green light for him to buy the Botany club from the franchisee.

Stuart knew little about our industry, but said he did have a passion for fitness. Fortunately, the club had a team of well trained professionals and Club Physical offered a strong support program with monthly marketing meetings, and on-call operations, sales and service guidance.

After his initial twelve months at the club Stuart made enquiries about purchasing a second location, Club Physical Three Kings, which he did. A few days after the purchase, however, we were shocked to discover that the team at that location had been asked to sign an employment agreement that also required them to not speak openly with the Club Physical Operations Team when they visited.

We were told this was because the new owner didn’t want ‘interference’ as he felt that the Operations Team visited too often and exerted too much influence on the team. (Interestingly, more recently in court the Club Physical Operations Team was accused of not visiting enough – a contradiction that our lawyers quickly highlighted.)

Similarly, Tina, whose role it was to supply the clubs with trained instructors for the extensive group exercise program says; ‘I would put Stuart’s clubs before our own. If someone was away sick on his club schedule, I would replace them first, then work on our own clubs.’

In May 2011 Keith, the Westgate franchisee, met with Stuart to discuss a sale and purchase agreement. Stuart then approached us to request approval for a third franchise. By this time, however, our experience working with Stuart had made us reluctant to approve this. He made it known that he was very unhappy with this decision, so we arranged a meeting at which we cited his abrasive business manner as the reason for not wanting to grant a third franchise. He apologised, said he was still trying to fit into the Kiwi culture and way of doing things, and said he would be more aware of his manner in the future. The meeting was positive and, giving Stuart the benefit of the doubt, we approved the third franchise, giving him three branches around Auckland, strategically West, central and South.

Unfortunately, Stuart’s way of communicating didn’t improve, and the volume of emails appeared to increase. It was now mid 2012 and Stuart asked, as a final step towards his New Zealand residency, if Club Physical could write a testimonial for him, which we duly did.

At this time a couple of unusual things happened. At the November marketing meeting Stuart introduced his father, who he said was visiting to help with ‘some business’. He then failed to attend the January marketing meeting claiming he was busy with a business meeting. Then he proceeded to urge Derek, Club Physical’s general manager, to quickly update and check all of the maintenance on the machines and equipment at Stuart’s three clubs.

‘I felt like I had been stabbed in the chest’

At 4pm on Friday 8 February 2013 I received an email with the subject line ‘Cancellation of three franchises’. As I read it I felt like I had been stabbed in the chest. The email had obviously been timed so it would be difficult to meet with solicitors before Monday.

At 4:30pm Tina telephoned me demanding to know why she was being refused entry to Westgate gym, and why she was being informed that it was no longer a Club Physical gym and that her services were no longer required. Tina and I had originally mortgaged our home to fit-out the Westgate club several years prior, and although it was franchised, Tina liked to go the extra mile and promote new classes and programs at the club.

On that same day, new signage was being simultaneously erected at all the locations franchised by Stuart. Our first thought was, ‘how can we communicate this to the members and the team?’ Members would be arriving at the club, bewildered to find it completely rebranded. That night we stood around the kitchen table with our kids and decided that the best thing to do was to place a frank and honest post on the Club Physical facebook Page.

Initially the three page letter from Stuart’s lawyers looked daunting. Yet upon studying the reasons given it was realised they were very weak, partially untruthful, and featured several exaggerations and some contradictions. Club Physical’s lawyers immediately applied for an interim injunction. It was a stressful eight weeks, but we won.

Club Physical’s facebook Page and subsequent updates drew the attention of tens of thousands of people. Business and franchise groups from around the world called for interviews and updates. Progress with the lawyers and the court was updated daily in the New Zealand Herald and myself, Tina and Club Physical members were twice interviewed on the prime time current affairs TV show Campbell Live.

It was a difficult and stressful time, and several ‘stays’ were granted to enable members to continue using the clubs while leasing issues were sorted out. On 27 March an agreement was arrived at, and the ownership of Three Kings, Botany and Westgate clubs was transferred back to us, the founders of Club Physical.

We are now taking full advantage of this situation, viewing it as an opportunity to ensure that each location has the very best possible team of people – people of integrity with a passion for wellness. We’re sad for the team members caught up in the situation, but we realise that there’s more to be achieved by looking forward than looking back.

The lessons myself, Tina and our team have learnt from this experience have been remarkable;

Franchising is becoming increasingly popular in the fitness industry, and it can be a mutually beneficial arrangement. Both parties, however, should exercise due diligence, and trust their instincts regarding whether the business relationship feels right for them.

Paul Richards
Paul left school at the age of 15 and didn’t voluntarily read a book until he was 25, when he picked up Napoleon Hill’s 1937 classic Think and Grow Rich. Since then, reading and learning has been a passion. After ‘kidnapping’ Tina to prove a point, she agreed to date him – it worked and, happily married, they have five daughters and one son. Most of the family have black belts in taekwondo and karate and workout twice daily. Paul and Tina now own seven health clubs, franchise two and license one.