Fitness Research is a partnership between Australian Fitness Network, the University of the Sunshine Coast and the Australian Institute of Fitness. Colleagues at USC recently published the following study that aligns with the partnership’s mission of improving the health of Australians through an improved body of fitness knowledge. 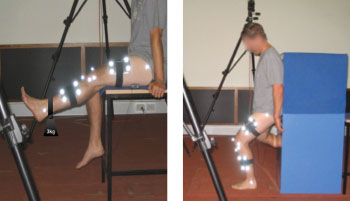 Methods: 3D motion analysis (Qualisys 3D-Motion Analysis System tracking 17 infrared markers) of the knee during seated knee extension with 3kg weight and a unilateral wall squat (see Figure 1) was performed with eight ACL deficient patients and eight healthy subjects matched for age, gender and sports history. We developed a model to measure joint kinematics through 70° of knee flexion and extension. ANOVA (analysis of variance) and paired t-tests compared relative ATD and tibial rotation between exercises and groups at 10° increments of flexion and extension.

Results: We found significantly less control of knee shear (i.e. increased ATD) in the wall squat compared to the seated extension for both healthy and ACL-deficient knees (p=.049). Participants with ACL-deficiency also showed abnormal internal rotation of the tibia with both exercises (i.e. the tibia was significantly more internally rotated (p=.003) in ACL-deficient knees, irrespective of the exercise). The most likely reason for the absence of differences in ATD between injured and healthy knees was that some ACL-deficient knees (copers) behaved more like normal knees, showing less ATD (Figure 2a) while others (non-copers) (2b) showed greater ATD. The latter may be representative of ineffective movement adaptation and coping.

Take home messages: Do not assume that all closed chain knee exercises are safe. Seek advice from the treating clinician (e.g. physiotherapist) when prescribing exercises for people with ACL injuries or surgery. Do not use wall squats or loaded open chain knee extension exercises for these clients unless you are certain they can maintain knee control (including knee shear/ATD and tibial rotation). Exercises need to be individually assessed and carefully prescribed. It remains essential to focus on the individual’s functional ability and control when prescribing and performing exercise.

Summary: Exercises that promote faulty knee movement (e.g. ATD or tibial rotation) should be discouraged, especially early post-ACL reconstruction. The early use of open chain knee extension resistance exercises in ACL rehabilitation is associated with increased joint laxity. In recent years, many clinicians have favoured the use of various closed chain exercises regardless of their effect on ATD and tibial rotation. However, this study suggests that wall squats may result in similar changes in tibial rotation and more ATD than open chain knee extension. 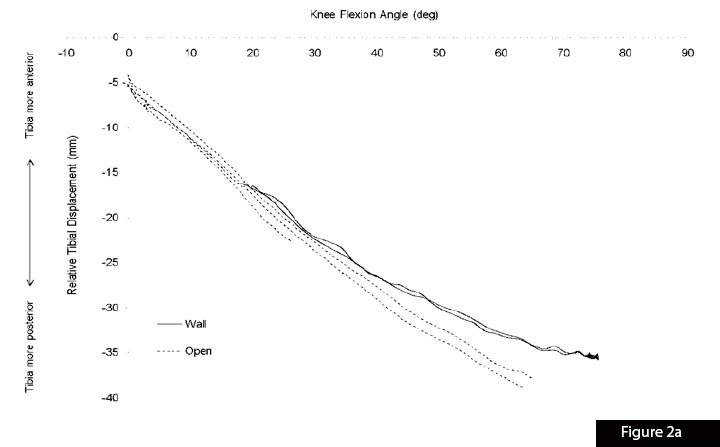 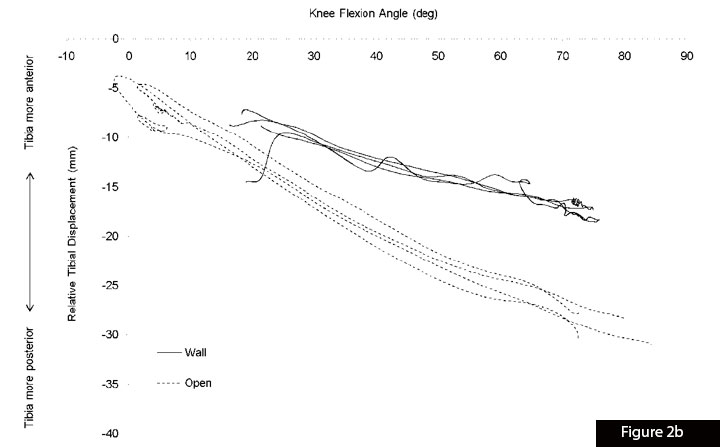 Figure 2: The amount of anterior tibial displacement during two single leg wall squats and two seated extensions in two ACLD subjects. Figure 2a is representative of some ACLD participants, possibly with more dynamically stable knees, and shows a similar profile to participants with healthy knees. Here the tibia moves posteriorly from 0°-70° of knee flexion. Figure 2b is representative of a possibly less dynamically stable group of ACLD participants. Here the tibia remains more anteriorly displaced throughout range more so in the CKC wall squat than the OKC seated extension.

Kanamori et al  2000
Increased ATD occurred in the ACLD compared to the intact knee on application on a 10Nm force.

Brandsson et al 2001
Increased internal rotation of tibia in ACLD knees during a step up.

Waite et al 2005[29]
Increased internal  tibial rotation and increased medial translation in ACLD compared to contralateral knees  but no difference in ATD during running and cutting.

Yack et al 1993[31]
ATD greater during active extension than squatting in ACLD but not in normal knees.