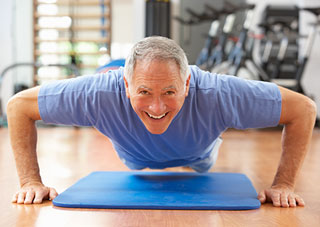 Men who achieve and maintain higher levels of fitness can hold age-related increases in blood pressure and hypertension at bay for longer than their non-active counterparts, according to a recent study.

Researchers from the University of South Carolina studied 14,000 men between the ages of 20 and 90 who were free of hypertension, cardiovascular disease and cancer over a 36-year period starting in 1970. Fitness levels were gauged via a strenuous cardiovascular treadmill exercise stress test – which, in conjunction with ECG, is an established tool in the diagnosis and prognosis of cardiovascular disease.

The study found that men with higher fitness levels are likely to reach the age at which normal systolic blood pressure (SBP) increases about a decade later (approximately age 54) than those with low fitness. The fitter males diastolic blood pressure (DBP) was found to not reach prehypertension level until approximately age 90, compared to age 42 in low fitness males. Interestingly, the researchers found that age-related blood pressure increases were independent of percentage body fat.
Study co-author Junxiu Liu, M.D., of the Arnold School of Public Health, University of South Carolina, said ‘Since regular physical activity is the primary and most modifiable determinant of fitness level, our results underscore the importance for a man to increase his regular physical activity to prevent his natural, aging-related rise in blood pressure’.
‘To move out of the low fit category, men should do at least 150 minutes of moderate-intensity of physical activity such as brisk walking, jogging, running, etc weekly’ Liu said.

Source: Journal of the American College of Cardiology