Too few running clients appreciate the role that hip strength training plays in both improved performance and the prevention of injury. 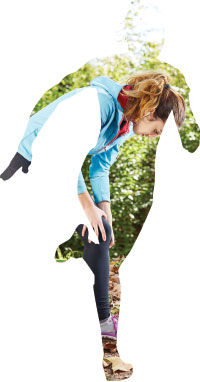 Of paramount importance to the runner is the need to have sufficient hip muscle stability and strength. Without it, the likelihood of sustaining an injury is vastly elevated.

What is hip stability?

‘Hip stability’ refers to the ability of the muscles around the hip joint to minimise excessive and unwanted movements of the hips when performing a task or certain movement.

Exercises such as side bridges, front planks, and abdominal crunches and sit ups are commonplace in both gyms and athlete’s home programs. While such a focus on the development of trunk muscle activation and strength is imperative, the activation, strength and endurance of the hip muscles should not be ignored. Yet the majority of runners are not aware of the difference between hip stability and overall ‘core stability’, and so miss the opportunity to develop the required hip stability and strength necessary for injury-free and fast running. 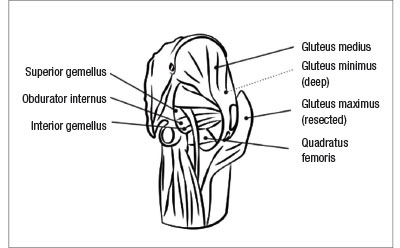 Why is hip stability important?

Hip stability is critical for faster running, injury prevention and rehabilitation. The muscles required for hip stability and strength are depicted below.

Let’s take a closer look at the role of hip stability and strength with regards to faster running, and injury prevention and rehabilitation.

When we consider that, for every hour of running, a runner will make contact with the ground 5,400 times, we begin to get an idea of why having sound and strong hip stability is of paramount importance to the runner looking to run pain and injury free. 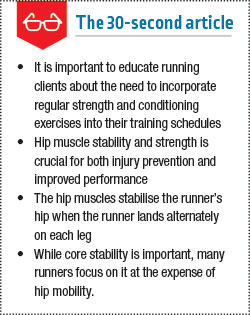 The hip muscles of a runner need to be able to withstand the loading that comes with repetitive leg impacts. An impact of up to three times a runner’s body weight must be absorbed, which is why the hip muscles play a critical role in ensuring that this impact force does not produce injuries.

In addition, if the hip muscles are not sufficiently strong, the runner’s pelvis will collapse on single leg landing. The effect of this is a slowing down with each and every leg landing. A collapsing pelvis requires more time to ‘collapse’ and then go through its range of motion than a pelvis that is strong, absorbs the loading from impact, doesn’t collapse, and helps one leg spring quickly and efficiently off the ground before landing on the opposite leg.

Although this slowing down will be only a tiny fraction of time, and may appear to be inconsequential, if you add up even an additional one hundredth of a second per leg landing due to insufficient hip muscle strength across an hour run, that is an additional 36 seconds for each leg across an hour run. Saving this time can be achieved not by training harder or running further, but by simply having hip muscles that are strong enough to provide adequate hip stability.

In 2009, researchers found that runners who underwent six weeks of core strength training improved their 5000-metre running times when compared to those who didn’t undergo the training. The runners who participated in the research were preparing for a marathon, and underwent four sessions of five core exercises for the duration of the study.

As with the widespread effect that running technique has on the onset of injury for runners, excessive hip motion during running represents a major injury risk factor for runners. When a runner’s hips move excessively due to hip muscle weakness, the legs of the runner will be subjected to greater loading and strain.

Research has found that hip adduction (where the hip moves towards the midline of the body) and internal rotation (a collapsing in of the hip towards the runner’s midline) have been associated with knee pain and iliotibial band syndrome.Altered hip movements and reduced hip strength are common findings in females with knee pain.

Research has also shown that females have a tendency to core instability, which may predispose them to greater incidence of lower extremity injury than males. In a 2004 paper, researchers found that female athletes displayed significantly decreased hip external rotation and side bridge measures compared with their male counterparts. They reported that athletes who experienced an injury over the course of a season displayed significant weakness in hip abduction and external rotation. They also concluded that hip external rotation was the sole significant predictor of injury status for the athletes they tested. They tested 80 female and 60 male athletes, many of whom were cross country runners.

If you have a client who has set a goal of competing in an upcoming road or trail running event, or who is incorporating regular running into their weekly fitness regime, be sure to include strength and conditioning work of the major hip muscles. Improving the overall hip stability of a runner requires three stages: the hip muscles first need to be activated, then strengthened, with the development of hip muscle endurance thereafter.

Brad Beer is a physiotherapist, founder of POGO Physio in QLD and author of the Amazon Bestselling book You CAN Run Pain Free! A Physio’s 5 Step Guide to Enjoying Injury Free & Faster Running. pogophysio.com.au