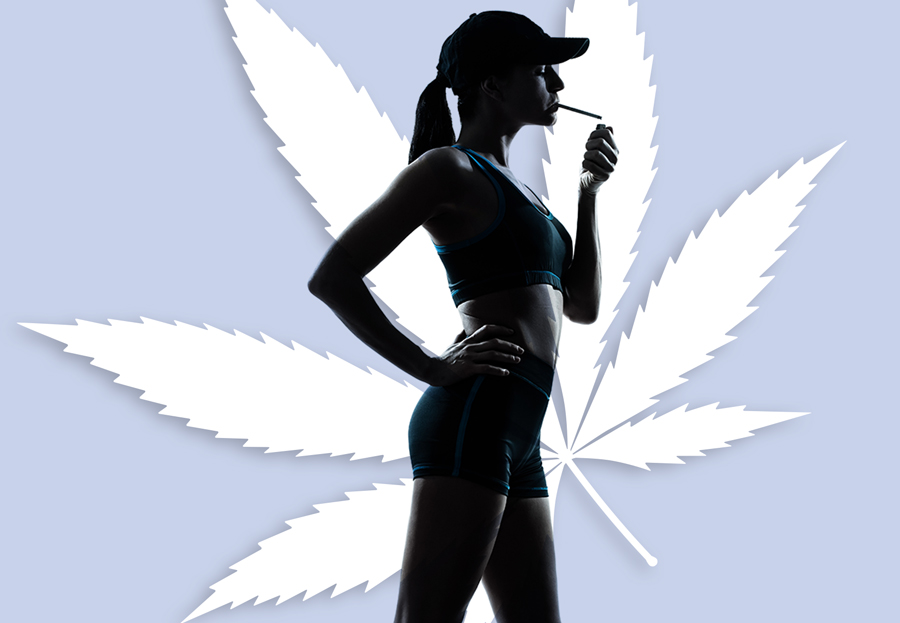 Eight out of 10 marijuana users in states where cannabis is legal say they partake in the drug shortly before or after exercise, and most report that it motivates them to work out, helps them enjoy exercise more and improves their recovery, according to surprising new CU Boulder research.

The paper published in the journal Frontiers in Public Health, is among the first to explore the complicated intersection between cannabis use and physical activity. While many assume the former impedes the later, the data suggest otherwise.

‘There is a stereotype that cannabis use leads people to be lazy and couch-locked and not physically active, but these data suggest that this is not the case’ said senior author Angela Bryan, a professor in the Department of Psychology and Neuroscience and the Institute for Cognitive Science.

She stressed that she was in no way recommending using cannabis as an adjunct to exercise; ‘The evidence is not there yet, but I am also not convinced it is harmful.’

Marijuana is now legal for recreational use in 10 US states and medicinal use in dozens more. Yet, little is known about how rising acceptance could impact public health measures like physical activity and obesity.

Some have speculated that increased use could worsen the obesity epidemic by fueling a sedentary lifestyle. On the other hand, the authors note, the World Anti-Doping Agency prohibits cannabis use in sporting competitions due to its potential to improve performance.

Anecdotally, ultrarunners sometimes use marijuana to battle nausea and boredom on long runs. And epidemiological studies show cannabis-users tend to be leaner, less prone to diabetes and have healthier blood sugar levels.

‘There are a lot of interesting data points and hypotheses out there, but not a lot of them have been tested’ said Bryan.

In a first step toward filling the research gap, she and her colleagues surveyed 600 adult marijuana users in California, Colorado, Nevada, Oregon and Washington, asking – among other questions – if they ever used cannabis within one hour before or four hours after exercise: 82% said yes. ‘We were stunned it was that high’ said Bryan.

A follow-up question of 345 ‘co-users’ (people who use cannabis with exercise) found they were more likely to use it after than before, but 67% said they did both.

Among those who co-used, 70% said it increased enjoyment of exercise, 78% said it boosted recovery, and 52% said it heightened motivation.

‘Given that these are all recognised barriers to exercise, it is possible that cannabis might actually serve as a benefit to exercise engagement’ the authors write.

Only 38% said it boosted performance, and in fact some small previous studies have suggested it may harm it. Notably, those who co-used also got about 43 minutes more exercise per week than those who didn’t.

With regards how cannabis might physiologically impact physical activity, co-author Arielle Gillman, a former doctoral student in Bryan’s lab, said ‘There is evidence to suggest that certain cannabinoids dampen pain perception, and we also know that the receptors cannabis binds to in the brain are very similar to the receptors that are activated naturally during the runners high. Theoretically, you could imagine that if it could dampen pain and induce an artificial ‘runner’s high,’ it could keep people motivated.’

Cannabis is also anti-inflammatory, which could aid recovery.

Preliminary results of a separate study show that after embarking on a 16-week exercise program, cannabis users exercised more than non-users: ‘As we get older, exercise starts to hurt, and that is one reason older adults don’t exercise as much. If cannabis could ease pain and inflammation, helping older adults to be more active that could be another benefit’ said Bryan.

Protein shakes down: variety of protein better for health

Amino acids have long been touted by the fitness and bodybuilding communities for their muscle building benefits. From ultra-bulk protein powders to lean mass-promoting snack bars, there’s no shortage of products available for those seeking a muscle boost.

‘While diets high in protein and low in carbohydrates were shown to be beneficial for reproductive function, they had detrimental effects for health in mid-late life, and also led to a shortened lifespan’ she explained; ‘What this new research has shown is that amino acid balance is important – it’s best to vary sources of protein to ensure you’re getting the best amino acid balance.’

The current research examined the impacts that dietary BCAAs and other essential amino acids such as tryptophan had on the health and body composition of mice.

‘Supplementation of BCAAs resulted in high levels of BCAAs in the blood which competed with tryptophan for transport into the brain’ explained Simpson.

‘Tryptophan is the sole precursor for the hormone serotonin, which is often called the ‘happiness chemical’ for its mood-enhancing effects and its role in promoting sleep. But serotonin does more than this, and therein lay the problem’ he said; ‘This then lowered serotonin levels in the brain, which in turn was a potent signal to increase appetite. The serotonin decrease caused by excess BCAA intake led to massive overeating in our mice, which became hugely obese and lived shorter lives.’

Source: The University of Sydney

Exercise proclivity is a state of mind

According to a new US study, differences in what motivates individuals and how they self-regulate behaviour influence how they keep fit. The study in the journal Heliyon associates personal characteristics with whether people are likely to prefer solo or group exercise activities, CrossFit® training, resistance training, or team sports, how frequently they work out, and whether they are likely to stick to their routine.

The investigators set out to better understand why individuals adopt and adhere to regular physical activity programs, whether differences exist in personality, participatory motives, and regulation-motivation styles associated with their exercise modes, and to determine the extent to which these factors predict their workout frequency. Their findings show that individuals selecting CrossFit, sports, or group exercise were more highly motivated by social connectedness (affiliation) than those engaging primarily in aerobic (e.g. long distance running) or resistance training exercise. Although all participants were highly motivated to engage in physical activity for positive health, those who engaged in resistance training and sport were more motivated by a sense of challenge than ill-health avoidance or weight management.

The study also demonstrated that individual differences in exercise motivation and self-control can predict participation frequency. Individuals who were more motivated by intrinsic reasons such as enjoyment, challenge, and stress management, exercised more frequently; CrossFit participants ranked highest in intrinsic motivation. Prior research has shown that people who exercise typically are more extraverted and conscientious, compared to an average population, but this study did not find any significant personality trait variances linked with different forms of exercise.

‘Many individuals who initiate exercise programs may actually select activities that conflict with their interests, styles, personalities, and/or reasons for engagement. Our findings support the need for individualised exercise programs, not only from a physical standpoint, but also from a motivational standpoint. Taking these factors into account may impact the amount of physical activity/exercise that individuals actually complete’ explained lead investigator Allyson Box. who began the work as an undergraduate student at Kennesaw State University, Georgia.

‘We encourage individuals to reflect on their personality and reasons for becoming physically active before diving into a physical activity program to ensure they engage in a physical activity that is compatible with their interest, personality, and goals’ the authors added; ‘Our findings suggest that it may be more than just seeking the latest ‘fitness fad’ or ‘new diet’ in order to influence health outcomes; identifying individual characteristics and motivational factors will aid in developing an exercise program that individuals will stick to over a prolonged period of time, not just a few months.’