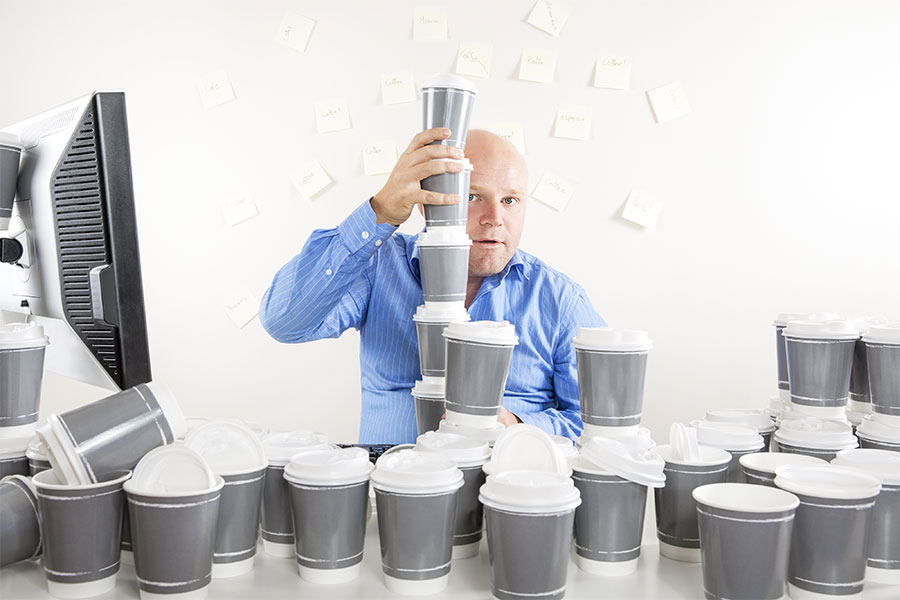 How many coffees is too many? • Self-regulation of food advertising doesn’t work • Grants aim to get more older Aussies active

How many coffees is too many?

While the pros and cons of drinking coffee have been debated for decades, new research from the University of South Australia reveals that drinking six or more coffees a day can be detrimental to your health, increasing your risk of heart disease by up to 22%.

Investigating the association of long-term coffee consumption and cardiovascular disease, University of South Australia researchers Dr Ang Zhou and Professor Elina Hyppönen of the Australian Centre for Precision Health say their research confirms the point at which excess caffeine can cause high blood pressure, a precursor to heart disease.

This is the first time an upper limit has been placed on safe coffee consumption and cardiovascular health.

‘Coffee is the most commonly consumed stimulant in the world – it wakes us up, boosts our energy and helps us focus – but people are always asking ‘How much caffeine is too much?’’ Hyppönen said.

‘Most people would agree that if you drink a lot of coffee, you might feel jittery, irritable or perhaps even nauseous – that’s because caffeine helps your body work faster and harder, but it is also likely to suggest that you may have reached your limit for the time being.

‘We also know that risk of cardiovascular disease increases with high blood pressure, a known consequence of excess caffeine consumption. In order to maintain a healthy heart and a healthy blood pressure, people must limit their coffees to fewer than six cups a day – based on our data six was the tipping point where caffeine started to negatively affect cardiovascular risk.’

Hyppönen said that despite carriers of the fast-processing gene variation being four times quicker at metabolising caffeine, the research does not support the belief that these people could safely consume more caffeine, more frequently, without detrimental health effects.

‘An estimated three billion cups of coffee are enjoyed every day around the world’ Hyppönen said; ‘Knowing the limits of what’s good for you and what’s not is imperative. As with many things, it’s all about moderation; overindulge and your health will pay for it.’

The researchers coded the advertisements using the World Health Organization (WHO) recommendations on which food and drink products should be permitted or not‐permitted to be advertised to children.

Products WHO recommends not to be marketed to children include chocolate and confectionery, cakes and sweet biscuits, juices, and energy drinks. It also recommends that products high in total fat, saturated fat, trans fat, total sugar, added sugar, non-sugar sweeteners, salt, and/or energy not be advertised to children.

They also found that during peak viewing times, the volume of advertisements for unhealthy products was higher in countries with industry codes of practice for responsible advertising compared with countries with no policies.

Lead author Associate Professor Bridget Kelly, from UOW’s Early Start Research and School of Health and Society, said the study showed the need for governments worldwide to enact regulation to protect children from television advertising of products that undermine their health.

‘Food industry self-regulatory codes to limit children’s exposure to food marketing have been ineffective globally – countries with these codes have worse rates of junk food advertising on TV than countries with no regulations’ Kelly said.

‘There is a large body of evidence that shows the marketing of unhealthy foods and beverages to children has a negative influence on children’s food knowledge, preferences, consumption, diet quality, and health. Industry self-regulation has been shown to be ineffective. It is time for governments around the world to step in and regulate the advertising of unhealthy foods to children.’

Restricting this sort of marketing is a global priority for obesity and diet‐related noncommunicable disease (NCD) prevention.

In 2010, 193 World Health Organisation Member States endorsed a resolution to restrict the marketing of food and drink products high in saturated fat, trans fat, free sugars, and/or sodium to children and adolescents. To date this has mostly been addressed by industry self-regulatory programs.

Globally, almost one in five people aged 5 to 19 years were overweight or obese in 2016, and the prevalence of obesity in young people has increased 10‐fold in the last 40 years.

The globalised nature of the processed foods and beverages industry and the dominance of a small number of large transnational corporations present an obstacle to more effective regulation.

In the study sample, one-third of all food and beverage advertisements originated from just 10 companies.

‘Companies that contribute most to unhealthy food marketing on TV do so across all markets – these are huge, powerful multinational companies with substantial political pull, which impacts on the ability and willingness of governments to regulate to protect children’ Kelly said.

It’s Exercise Right Week, and this year the focus is on active ageing, making this news item particularly pertinent.

parkrun Australia is a free weekly social fitness activity operated by local volunteers. Held in thousands of locations in 23 countries, Parkrun is now acknowledged as the largest mass participation sporting event on the planet.

Every Saturday morning at 7 or 8am in 355 locations around Australia, more than 50,000 people lace up their runners and walk, jog, run, push the pram or wheel their way around a 5km wheelchair-friendly course.

parkrun’s Generations Project is about connecting older Australians with their weekly local parkrun community event where they too can run, walk, volunteer and socialise with people of all ages.

A common misconception is that parkrun is for “runners”. Participants actually compete against themselves, and there are no “winners or losers”, with a de-emphasis on the competitive side of the event. The supportive environment of parkrun also means that a dedicated volunteer ‘tail walker’ always comes in last.

The number of Australians aged 65-plus is expected to double in the next 40 years. This shift presents a challenge in broader health terms, but provides a chance for sport and physical activity to make a positive difference to the lives of older Australians.

Currently, only 25% of Australians over 65 meet the Department of Health physical activity guidelines of 30 minutes activity per day.