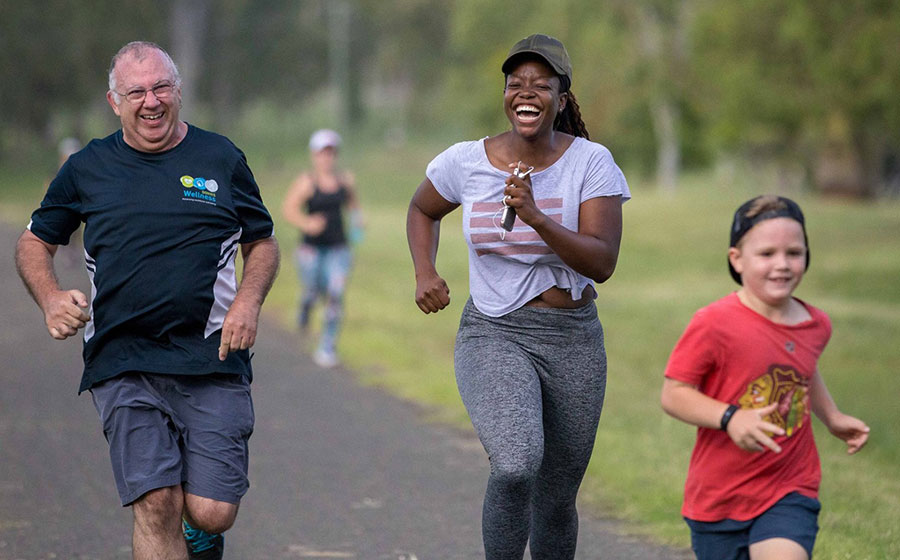 Plan for GPs to prescribe parkrun to patients

Following on from the overwhelming success of the UK social prescription program, ‘parkrun Practices’, parkrun Australia has developed and distributed an online survey to primary healthcare professionals to begin the social prescription journey here. The survey aims to gather data from a range of primary healthcare professionals, including GPs, physiotherapists and registered nurses, to gain insight and discover more about referral to parkrun in Australia. If you have a good referral network of allied health professionals, forward them this link.

The free, weekly, 5km timed walk or run event has grown significantly since it launched

in Australia in 2011, now taking place in over 346 locations nationwide and evolving into

an authentic health and social intervention. parkrun Australia Health and Wellbeing Lead, Glen Turner, said the health survey aims to formalise and maximise what seems to already be happening in the Australian health space.

‘We know anecdotally that parkrun is being socially prescribed/referred across the Australian health sector and both patients and health professionals have shared their success stories’ Turner said.

‘What’s really encouraging about these referrals is that it showcases a broader range of ways that parkrun has become a health enabler. We know people are being signposted to parkrun for a variety of reasons – walking, volunteering, getting fresh air, increasing social capital.’

The aim of the survey to is to better understand the broader picture, including which primary healthcare professionals already refer patients to parkrun, how they refer and why.

‘We will use the survey results to evaluate outcomes and impacts, which will help us to demonstrate effectiveness and further develop our understanding of the health landscape in Australia. We then aim to collaborate with organisations and government at a local and national level to scale up the social prescription of parkrun’ Turner said.

parkrun UK has set the international precedent for social prescription and lifestyle medicine, with overwhelming success. Driven by dynamic GPs and health professionals, the initiative began with a health survey and led to a collaboration with the Royal College of General Practitioners, creating lasting health and wellbeing interventions which inform development of policy and practice within the UK.

‘parkrun Practices in the UK has had overwhelming success with 700 clinics in the UK linked to the initiative within the first 7 months. It’s clear from the UK experience that this concept can work and it’s now captured the imagination of healthcare professionals and professional bodies in Australia’ he said.

Healthcare professionals can take part in the survey by following this link.

In a small study published in the Journal of the American College of Nutrition, investigators found that participants ran a 5K 6% faster after eating a Mediterranean diet than after eating a Western diet. Researchers found no difference between the two diets in performance in anaerobic exercise tests.

Senior researcher Edward Weiss, Ph.D., professor of nutrition and dietetics at SLU, says the Mediterranean diet is well-established as having numerous health benefits. He and his team hypothesised that the diet’s anti-inflammatory and antioxidant effects, more alkaline pH and dietary nitrates might lead to improved exercise performance.

‘Many individual nutrients in the Mediterranean diet improve exercise performance immediately or within a few days. Therefore, it makes sense that a whole dietary pattern that includes these nutrients is also quick to improve performance’ Weiss said; ‘However, these benefits were also quickly lost when switching to the Western diet, highlighting the importance of long-term adherence to the Mediterranean diet.’

The study enrolled seven women and four men in a randomized-sequence crossover study. The participants ran five kilometers on a treadmill on two occasions – once after four days on a Mediterranean diet and on another occasion after four days on a Western diet, with a period of nine to 16 days separating the two tests.

‘This study provides evidence that a diet that is known to be good for health is also good for exercise performance’ Weiss said; ‘Like the general population, athletes and other exercise enthusiasts commonly eat unhealthy diets. Now they have an additional incentive to eat healthy.’

Drinking a casein shake just before overnight sleep increases gains in muscle mass and strength in response to resistance exercise. But to date, no study has directly addressed whether this effect is due to increased total protein intake only, or if a bedtime beverage is better.

According to a review published in Frontiers in Nutrition, existing findings nevertheless suggest that overnight sleep is a unique nutritional window for boosting muscle gains, while late-night protein calories needn’t increase body fat.

Snijders’ team put 44 healthy young men on a 12-week lifting program. Half were given a nightly pre-sleep protein shake with about 30g of casein and 15 grams of carbs, while the other half got an energy-free drink. The training was effective, with both groups achieving a bigger squat (one rep max) and bigger quads, but the protein-before-bed group gained significantly more muscle strength and size.

Only one study has attempted, unsuccessfully, to test whether muscle gains are boosted by pre-sleep protein per se, or just higher total intake of protein and calories. It showed that fat-free mass gains over 8 weeks of unaltered training in regular lifters were greater (+1.2 kg vs +0.4 kg) with a nightly casein supplement, compared to the same supplement taken in the morning. The difference was not statistically significant, however, perhaps because there were only 26 participants.

‘Based on our own studies, we calculated that a huge number of participants would be needed to prove whether a difference might exist in response to pre-sleep protein, versus protein intake at other times of the day’ explained Snijders. However, there are already numerous indirect indicators that pre-sleep protein specifically is beneficial for healthy young lifters.

Fundamentally, pre-sleep protein can be used to improve protein intake distribution over the day, said Snijders. Muscles can only grow and repair themselves when the right building blocks, amino acids from protein, are available in the blood. But unlike blood glucose, the body does not store and release amino acids to maintain near-constant circulating levels.

‘A survey of over 500 athletes found they were typically consuming a total of more than 1.2g protein per kilo of bodyweight across three main meals, but only a paltry 7g of protein as an evening snack. As a result, lower levels of amino acids would be available for muscle growth during overnight sleep.’

But if pre-sleep protein consumption allows muscles to cram in more amino acids at night, will they simply use less during the day? Apparently not, according to Snijders: ‘The muscle-building effects of protein supplementation at each meal seem to be additive. In one study we found that the consumption of ample amounts of protein (60g whey) before overnight sleep did not alter the muscle protein synthetic response to a high-protein breakfast the following morning.

‘What’s more, others have shown that adding a protein supplement at bedtime does not affect appetite the following morning – so it is unlikely to compromise total protein or calorie intake.’

While the case for pre-sleep protein remains preliminary, is there any harm in trying it? After all, it does involve consuming calories just before a long period of inactivity. The evidence is sparse, but encouraging.

‘In the 8-week morning vs evening casein study, the additional consumption of protein calories did not result in any increase in fat mass despite the fact that exercise volume did not change’ reported Snijders; ‘But again, these results should be interpreted with caution due to the low number of volunteers included.

‘Supporting this, another group found in 11 young active men that a pre-sleep casein shake actually increased the rate of fat burning the following day. This might be because casein ingestion reduces the insulin response to subsequent meals, which pushes your body to use more fat.’

Based on the results of these studies at least, pre-bed protein consumption, especially casein, doesn’t appear to ‘make you fat.’ Indeed, it appears to actually increase fat metabolism. Finally, pre-sleep protein won’t stop you getting your well-earned rest.

‘It has been consistently shown that pre-sleep protein ingestion has no effect on sleep onset latency or sleep quality.’