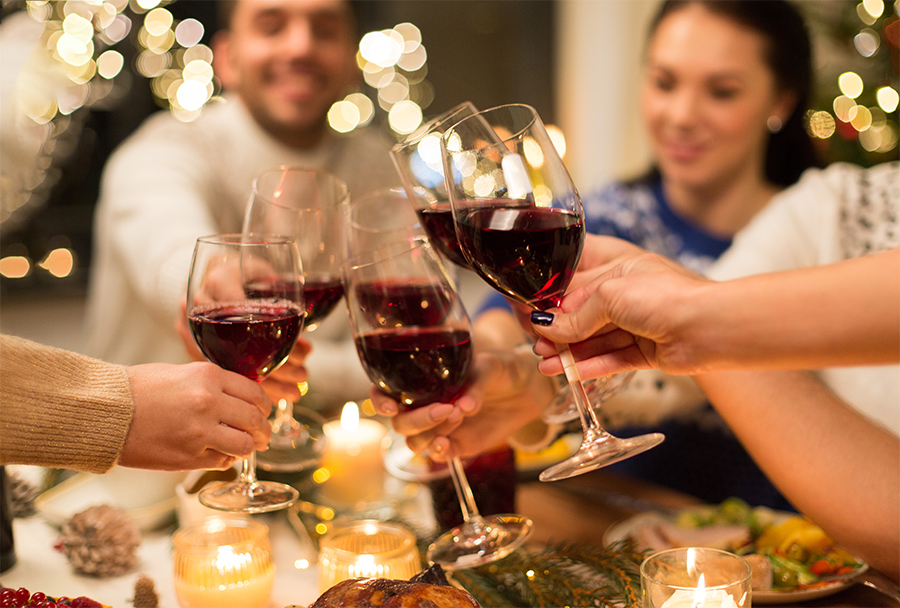 This week: Red wine may be best booze for gut health • One workout boosts performance of ageing brain • Potential cause of statin-related muscle pain identified

Red wine may be best booze for gut health

New research suggests that drinking red wine in moderation improves the bacterial diversity in our guts and may protect our overall health.

Many scientific studies have looked into the alleged benefits of red wine consumption. From the popular notion that a little bit of red wine is good for the heart, to the less known theory that compounds in red wine may benefit depression or oral health, drinking red wine in moderation seems to have a lot of hidden therapeutic potential.

New research adds to the list of red wine’s possible health benefits. An observational study, whose first author is Caroline Le Roy from King’s College London in the United Kingdom, examined the gut health of red wine drinkers and compared it with that of people who drank other types of alcohol.

The researchers found a greater diversity of bacterial species in the guts of red wine drinkers compared with those who did not drink red wine. Greater bacterial diversity is a marker of gut health. Le Roy and colleagues published their findings in the journal Gastroenterology.

The scientists examined data from 916 female twins and compared the effects of beer, cider, red wine, white wine, and spirits on the participants’ gut microbiotas and overall health. The team accounted for potential confounders, such as age, weight, diet, and socioeconomic status. After considering all of these factors, the researchers still saw an association between bacterial diversity and red wine consumption.

Red wine drinkers had a higher number of different bacteria in their guts, lower rates of obesity, and lower levels of cholesterol than non-red wine drinkers. The researchers confirmed these findings over three different cohorts based in the UK, the Netherlands, and the US.

‘While we have long known of the unexplained benefits of red wine on heart health’ said Le Roy, ‘this study shows that moderate red wine consumption is associated with greater diversity and a healthier gut microbiota that partly explains its long debated beneficial effects on health.’

Professor Tim Spector, from King’s College London, also commented on the significance of the findings, suggesting that polyphenols could be responsible for red wine’s benefits.

‘This is one of the largest ever studies to explore the effects of red wine in the guts of nearly 3,000 people in three different countries and provides insights that the high levels of polyphenols in the grape skin could be responsible for much of the controversial health benefits when used in moderation.’

Polyphenols are naturally occurring chemicals found in plants. Flavonoids and phenolic acids are types of polyphenols.

Fruits and vegetables are naturally very rich in polyphenols, which are, in turn, full of antioxidants that fight off cell damage. Polyphenols may “fuel” the beneficial microorganisms that live in our guts.

Previous studies have suggested that polyphenols may help protect against a range of cardiometabolic conditions, such as obesity, type 2 diabetes, or heart disease.

However, the researchers cautioned that theirs was an observational study. This means that the authors cannot confirm that it is the red wine causing this beneficial effect on the microbiota. They also point out that moderation is key.

‘Although we observed an association between red wine consumption and the gut microbiota diversity, drinking red wine rarely, such as once every 2 weeks, seems to be enough to observe an effect,’ said Spector; ‘If you must choose one alcoholic drink today, red wine is the one to pick as it seems to potentially exert a beneficial effect on you and your gut microbes, which in turn may also help weight and risk of heart disease. However, it is still advised to consume alcohol with moderation.’

New research from the US shows that exercise may provide a boost to the mind.

University of Iowa researchers found that a single bout of exercise improves cognitive functions and working memory in some older people. In experiments that included physical activity, brain scans, and working memory tests, the researchers also found that participants experienced the same cognitive benefits and improved memory from a single exercise session as they did from longer, regular exercise. The study findings were published in the journal Medicine & Science in Sports & Exercise.

‘One implication of this study is you could think of the benefits day by day’ said Michelle Voss, assistant professor in the Department of Psychological and Brain Sciences and the study’s corresponding author; ‘In terms of behavioral change and cognitive benefits from physical activity, you can say, ‘I’m just going to be active today. I’ll get a benefit.’ So, you don’t need to think of it like you’re going to train for a marathon to get some sort of optimal peak of performance. You just could work at it day by day to gain those benefits.’

Previous research has shown exercise can confer a mental boost. But the benefits vary: one person may improve cognitively and have improved memory, while another person may show little to no gain. Limited research has been done on how a single bout of physical activity may affect cognition and working memory specifically in older populations, despite evidence that some brain functions slip as people age.

Voss wanted to tease out how a single session of exercise may affect older individuals. Her team enrolled 34 adults between 60 and 80 years of age who were healthy but not regularly active. Each participant rode a stationary bike on two separate occasions – with light and then more strenuous resistance when pedaling – for 20 minutes. Before and after each exercise session, each participant underwent a brain scan and completed a memory test.

In the brain scan, the researchers examined bursts of activity in regions known to be involved in the collection and sharing of memories. In the working memory tests, each participant used a computer screen to look at a set of eight young adult faces that rotated every three seconds – flashcard style – and had to decide when a face seen two ‘cards’ previously matched the one they were currently viewing.

After a single exercise session, the researchers found in some individuals increased connectivity between the medial temporal (which surrounds the brain’s memory centre, the hippocampus) and the parietal cortex and prefrontal cortex, two regions involved in cognition and memory. Those same individuals also performed better on the memory tests. Other individuals showed little to no gain.

The boost in cognition and memory from a single exercise session lasted only a short while for those who showed gains, the researchers found.

‘The benefits can be there a lot more quickly than people think’ Voss said; ‘The hope is that a lot of people will then keep it up because those benefits to the brain are temporary. Understanding exactly how long the benefits last after a single session, and why some benefit more than others, are exciting directions for future research.’

The participants also engaged in regular exercise, pedaling on a stationary bike for 50 minutes three times a week for three months. One group engaged in moderate-intensity pedaling, while another group had a mostly lighter workout in which the bike pedals moved for them.

Most individuals in the moderate and lighter-intensity groups showed mental benefits, judging by the brain scans and working memory tests given at the beginning and at the end of the three-month exercise period. But the brain gains were no greater than the improvements from when they had exercised a single time.

‘The result that a single session of aerobic exercise mimics the effects of 12 weeks of training on performance has important implications both practically and theoretically,’ the authors write.

Source: The University of Iowa

An international team of researchers may have discovered why a small number of people experience muscle pain after taking statins. The research could help doctors prevent a known side effect of statins and ensure people are able to reap the benefits of the life-saving drugs.

According to the research, published in JACC: Basic to Translational Science, statins cause spontaneous and irregular leaks of calcium from storage compartments within muscle cells. Under normal conditions, coordinated releases of calcium from these stores make the muscles contract. Unregulated calcium leaks may cause damage to muscle cells, potentially leading to muscle pain and weakness.

The researchers, whose work was funded by the British Heart Foundation, suggest that in most people, muscle cells can tolerate this calcium leak. However, in people already susceptible due to their genes or lifestyle, the leak caused by statins may overwhelm the muscle cells, giving rise to muscle pain and weakness.

The findings explain why only some people experience muscle pain after taking statins and could help doctors to identify those most likely to experience symptoms so they can be offered alternative therapies.

The researchers also showed that moderate exercise may prevent the changes which lead to calcium leaks from occurring, and it may be an effective way for people taking statins to avoid muscle symptoms.

Statins reduce a person’s risk of a heart attack or stroke by lowering the levels of so-called ‘bad cholesterol’ in the body. They are particularly beneficial for people who have already had a heart attack or stroke and are also effective in those who are identified as being at risk of having one in future. Although side effects are rare, muscle pain and weakness are important reasons why some people stop taking these potentially life-saving drugs.

Researchers based at the University of Leeds and the Karolinska Institute in Sweden investigated the effects of statins on muscle biopsies from patients taking statins long term and from rats treated with statins for 4 weeks.

Despite the cell changes, statins did not affect muscle function or strength in rats. These findings support the theory that muscle cells can tolerate the calcium leak, meaning only those who are susceptible experience symptoms.

Importantly, the study also suggests that the potentially harmful effects of statins on muscle can be countered with exercise. When rats were given free access to an exercise wheel, the statin-related changes to the gatekeeper proteins no longer occurred and pro-cell death signals were not elevated in the muscles. In fact, rats treated with statins ran twice as far as control rats. The findings challenge previous reports that exercise makes statin side effects worse.

The researchers point out that they did not directly show that the cell changes lead to muscle weakness and pain in people, but note that this is likely. The proposed mechanism may also explain why heart muscle, which has different gatekeeper proteins for calcium release, is protected from any potentially harmful effects of statins.

Professor Metin Avkiran, Associate Medical Director at the British Heart Foundation, said ‘Statins are life-saving drugs and most people who take them don’t experience side effects. Those who do suffer muscle pain and weakness should always ask their doctor if a different statin or dose might solve the problem. Identifying how statins affect muscle cell biology is the first step in preventing potential muscle side effects – and ensuring that people who are susceptible to those side effects do not miss out on the protection afforded by statins.’