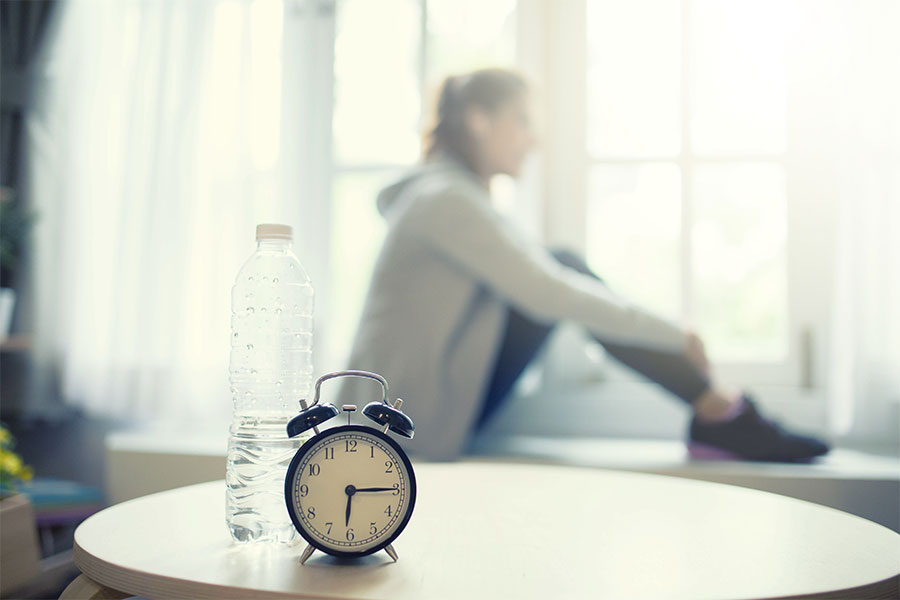 Exercise can shift the human body clock, with the direction and amount of this effect depending on the time of day or night that people exercise, according to new research published in the Journal of Physiology. These findings suggest exercise could counter the effects of jet lag, shift work and other disruptions to the body’s internal clock, helping individuals adjust to shifted schedules.

The circadian ‘body’ clock is the 24-hour cycle that regulates many physiological processes including sleeping and eating. Many factors affect this internal body clock, including light and time cues. Exercise has been known to cause shifts in the circadian clock, however very little is known about this effect.

The researchers at University of California, San Diego and Arizona State University examined body clocks following exercise in 101 participants for up to five and a half days. The baseline timing of each participant’s body clock was determined from urine samples collected every 90 minutes to measure the time of the evening rise in melatonin and the peak of melatonin several hours later. Participants then walked or ran on a treadmill at a moderate intensity for one hour per day for three consecutive days. They exercised at one of eight different times of day or night, but each individual exercised at the same time on all three days or nights. The timing of the body clock was re-assessed following the third exercise session.

Given that the subjects tested were more physically active than average, the results might not translate to the average person. Further research will look at combining exercise with bright lights and melatonin to see what impact this has on body clocks, as well as examining the effect of changes in exercise duration and intensity on the body clock.

Shawn Youngstedt, first author on the paper, said: ‘Exercise has been known to cause changes to our body clock. We were able to clearly show in this study when exercise delays the body clock and when it advances it. This is the first study to compare exercise’s effects on the body clock, and could open up the possibility of using exercise to help counter the negative effects of jet lag and shift work.’

For a long time, the focus on exercise has been on the positive changes in the body that occur following a longer period of training. However, these findings suggest that the effects following a single session of HIIT, an exercise regime involving short, high energy bursts are also important.
The changes following HIIT suggest that repeated exposure to the acute effects of exercise may contribute to the fight against the cancer.

The study conducted by The University of Queensland in conjunction with the University of Waterloo, Ontario, involved colorectal cancer survivors completing either a single session of HIIT or 12 sessions over 4 weeks. Their blood samples were collected either immediately after the single session of exercise or at rest after 4 weeks of training, and were then analysed to study the growth of colon cancer cells.

Importantly the method used to model the colon cancer cells in the laboratory is very different to how they grow in the human body, requiring future research to translate these findings into human tumours.

James Devin, lead author on the research said: ‘We have shown that exercise may play a role in inhibiting the growth of colon cancer cells. After an acute bout of HIIT there were specific increases in inflammation immediately after exercise, which are hypothesised to be involved in reducing the number of cancer cells.’

‘This suggests that a physically active lifestyle may be important in tackling human colorectal tumours. We would now like to look at how these changes in growth occur and understand the mechanisms by which biomarkers in the blood can impact cell growth.’

According to recent research from Finland, as little as one resistance training session per week improves blood values, muscle strength and mental wellbeing in those aged over 65.

‘We found that individuals who were close to having high blood pressure, high cholesterol, high blood glucose, or high levels of inflammation improved the most after our 9-month training program. Training two or three times per week didn’t provide greater benefit in these individuals’ said Dr Simon Walker of the Faculty of Sport and Health Sciences, though it was noted that strength development, muscle growth and fat loss benefited from training more times per week.

‘But for other measures that are important for older people, such as the ability to perform activities of daily living, once per week seemed sufficient. Muscle strength that is needed for carrying shopping bags, walking up and down the stairs and sitting down on a toilet can be improved with strength training’ Walker said.

Overall wellbeing, tested through psychological measures, also improved over the 9-month training period. Similarly, there were no real differences whether individuals trained only once per week or two to three times per week. The researchers found that it was very important that people improved their psychological wellbeing and motivation for exercise during the study period as it was those people who continued training regularly even after the study had ended.