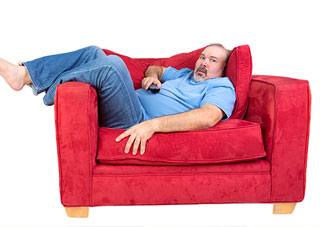 A recent study has found that growing rates of obesity in the US may be due to an increase in sedentary behaviour rather than calorie consumption, which researchers say has remained relatively steady over the past 20 years.

After analysing two decades of data from the US National Health and Nutrition Examination Survey (NHANES), a team from Stanford University School of Medicine established a steep decline in physical activity, particularly in young women.

Rates of inactivity in this group more than doubled over the 20-year period, with 51.7 per cent of female adults in the study participating in no exercise at all. For men, the percentage reporting zero physical activity nearly quadrupled over the same time period from 11.4 per cent in 1994 to 43.5 per cent in 2014. Over the same period BMI and average waist size also increased.

Commenting on the findings, lead author Uri Ladabaum said: ‘At  the population level, we found a significant association between the level of leisure-time physical activity, but not daily caloric intake, and the increases in both BMI and waist circumference.’

‘It remains controversial whether overweight alone increases mortality risk, but the trends in abdominal obesity among the overweight are concerning in light of the risks associated with increased waist circumference independent of BMI’ he said.

Ladabaum said the findings were contrary to the widespread belief that diet was the primary cause of the nation’s obesity problem: ‘Our findings do not support the popular notion that the increase of obesity in the United States can be attributed primarily to sustained increase over time in the average daily caloric intake of Americans.’

Source: The American Journal of Medicine