Mighty mitochondria (and why your clients should love them)

The often forgotten ‘powerhouse’ of the cell, the more mitochondria we have, the lower our risk for developing many chronic diseases. So how can we get more of them? 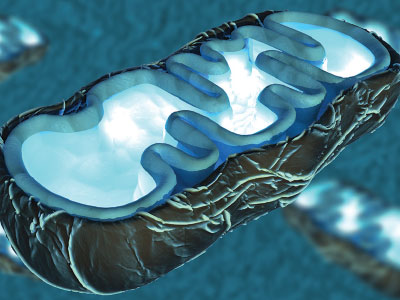 The vast majority of focus in the fitness industry is on skeletal muscle and its ability to contract, with the emphasis on how to make it bigger, stronger and more functional.

The often forgotten aspect of muscle is the mitochondria. Often called the ‘powerhouse’ of the cell, for its ability to oxidise fuel sources to create energy, mitochondria are critical for health and the evolution of the human species. The more mitochondria we have, the lower our risk for developing many chronic diseases. The average individual may have literally billions of mitochondria in their skeletal muscles, and the trained individual even more. It has been estimated to comprise around 10 per cent of an individual’s body mass.

Given the strong relationship between mitochondria and healthy ageing, it makes sense to further our understanding of the microscopic world of this ancient ‘bacteria’ by exploring how the body grows them, the contribution of exercise to their development and function, and the role nutrition plays in keeping them healthy.

50 years ago, pioneering research by John Holloszy showed, for the first time, that endurance training could cause an increase in the number of mitochondria found in the muscle of rats. Holloszy discovered increased oxygen and energy utilisation in rats that were exercised on a treadmill compared to their sedentary peers, and it was this finding that explained their improved endurance fitness.

Since 1967, our understanding of mitochondrial regulation in muscle has progressed rather slowly until modern times, when advancements in molecular biology have allowed researchers to use state-of-the-art techniques to measure the cellular triggers causing the growth and expansion of new mitochondria, termed mitochondrial biogenesis.

It is now understood that our mitochondria is regulated by a complex interaction between several ‘energy sensors’ in the muscle and ‘co-activators’ which cause the proteins to become transcribed and formed into mitochondria. The primary energy sensor in the muscle is a kinase called AMPK. Muscle contraction (both intensity and duration), as well as the ‘energy status’ of the muscle (i.e. depleted levels of glycogen) cause the activation of AMPK. This, in turn, upregulates the co-activator PGC-1α to start the process of mitochondrial biogenesis.

There has been incredible interest in recent years in exploring the AMPK/ PGC-1α pathway in mitochondrial biogenesis, as mitochondrial dysfunction is now regarded as an important component of different diseases associated with ageing, such as type 2 diabetes and Alzheimer’s disease. It has also been shown that AMPK activity decreases with age and sedentary lifestyles, which may contribute to decreased mitochondrial biogenesis and function with ageing and disuse.

Muscle contraction during exercise increases the activity of AMPK (which detects falling energy availability in the muscle), which, in turn, increases the expression of PGC-1α and signals the growth and proliferation of mitochondria.

Aerobic exercise that emphasises volume (continuous aerobic endurance training) or intensity (such as high intensity interval training – HIIT) is generally regarded as the most potent controller of the growth and function of mitochondria. Research indicates that volume plays the greatest role in the growth and size of mitochondria, and intensity appears to regulate their function. It is difficult, therefore, to definitively say whether HIIT or continuous exercise are ‘better’ for mitochondria as they both facilitate different effects, but a very recent study has shown that when matched for total volume, HIIT appears to have the edge. Resistance training, at this time, has a lesser-known role in the regulation of mitochondria. 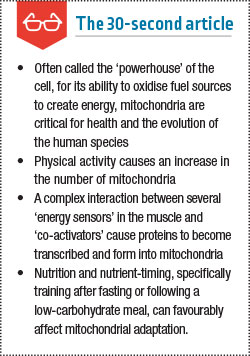 Research has begun to explore the potential role of nutrition, supplements and the timing of food intake on mitophagy and the regulation of mitochondria. Time-restricted feeding, periodic fasting and fasting-mimicking diets are all promising interventions. Both time-restricted feeding and fasting-mimicking diets increase the activity of AMPK and thus promote the transcription of PGC-1α and subsequent mitochondrial biogenesis. Time-restricted feeding works on a simple premise that humans have evolved an exquisite relationship between the timing of food availability and its consumption, with periods of fasting, which correspond with sleeping time. The invention of ‘artificial’ light has enabled both activity and food consumption to occur when, for all of previous human evolution, we would have been asleep. Advancements in our understanding of circadian physiology have demonstrated several metabolic markers of health, including increased activity of AMPK and mitochondrial growth, when there is a daily fasting period of 12 to 14 hours.

Several food compounds have been shown to augment the effect of exercise on mitochondrial biogenesis in animal studies. The most promising to date are green tea extracts, sodium bicarbonate, caffeine, cocoa, resveratrol, quercetin, and certain amino acids. The vast majority of human data, however, at this early stage of investigation, has failed to find the same benefits seen in rodents. Research is currently underway to discover why this is the case.

Debilitating genetic diseases that cause mitochondrial dysfunction and concurrent muscle wasting can afflict both children and adults. Due to the inability to contract skeletal muscle in these patients, there has been research interest in ‘supplement cocktails’ that have the potential to ‘mimic exercise’ and create mitochondrial biogenesis. Animal experimental models have demonstrated the potential role of certain supplements in the support of healthy mitochondria (Creatine, l-Carnitine, α-lipoic acid, Coenzyme Q10, reduced nicotinamide adenine dinucleotide (NADH)). Supplements containing nicotinamide riboside appear to have the greatest likelihood of positively affecting mitochondria. Only short-term data currently exists for the efficacy of these nutrients and long-term robust human experimentation is still needed.

Recent research has shown that performing exercise or recovering from exercise without the provision of carbohydrate has a favourable effect on mitochondrial adaptation. This can be done by performing sessions without a carbohydrate-rich meal before, or performing glycogen depleting exercise (e.g. HIIT) and then recovering with little emphasis on carb-rich foods and training again, depleted, or sleeping ‘low’ and training first thing before breakfast while withholding carbohydrate. AMPK activity and mitochondrial adaptation is significantly increased when exercise is performed in a glycogen-depleted state, when compared with muscle contracted in a state of high muscle glycogen.

The key to mitochondrial adaptation is stress and variety. In practice, you would ensure that over the weeks you would perform several different styles of sprint interval training (SIT) or HIIT, sometimes with low muscle glycogen and sometimes with high, which would then be followed by lower carbohydrate eating, sleeping ‘low’ and training before breakfast to ramp up AMPK.

These methods, along with regular resistance training and, perhaps, time-restricted feeding will look after our mitochondria and they, in turn, will look after us as we age.

Tony Boutagy, PhD, AES, AEP is a Sydney-based fitness professional who has been involved in training the public, coaching athletes and educating personal trainers for over two decades. He is an Accredited Exercise Physiologist, holds a PhD in Exercise Science and runs the Boutagy Fitness Institute in Sydney, a strength gym and education centre for personal trainers. tonyboutagy.com