MINDSET COACHING: Mobility for the mind

Challenging what you think you know to be true can be pretty uncomfortable, but it’s essential if you are to become a better version of yourself. 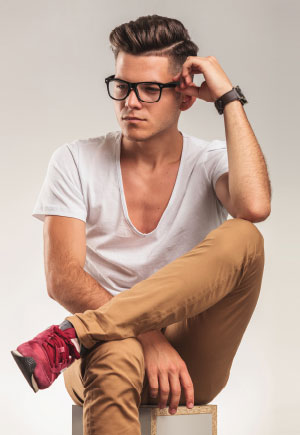 In fitness, we talk about having mobility – being able to move our joints and body through different ranges of motion to suit everyday activity. If you concentrate too much on one aspect of fitness, like developing strength or endurance, typically you’ll limit the mobility you have around a joint, meaning you’ll be able to move less freely and the muscles become less responsive. It’s the same in your mind – if you repeatedly reinforce unhelpful thinking, you strengthen the brain’s neural pathways, making it harder to change.

We tell ourselves the same inaccurate stories over and over again because they’re easier to digest and keep us comfortable in the status quo. After about 66 days on average of forming new habits, you begin to entrench behaviours, limiting beliefs and mental roadblocks that fester to the point where we grind to a halt. Sound familiar?

The stories act as excuses to not do anything differently than we have in the past. Common phrases such as ‘oh yeah, that doesn’t work for me’, or ‘I’ll believe it when I see it’ are examples of being in denial that change needs to take place. It’s hard to clear out old thinking to gain mobility because most of those thoughts have been entrenched since around age six, when the neural pathways in the brain reach full development.

Nobody wants to hear the truth: we’re scared we’ll find out we were wrong all along, so we hold onto our unhelpful thoughts for dear life. Do you ever reach that point during an argument with someone where you realise that you’re wrong – you’ve lost, yet you’ll keep fighting just to save face? That’s what happens when we lose mind mobility; it stops us from being better versions of ourselves because challenging what we think we know to be true can be pretty uncomfortable. We have to get comfortable with being uncomfortable.

We have thoughts running through our heads all the time in a subterranean insanity that gets out of control when the things we’re saying aren’t helpful. Every one of us will process approximately 60,000 thoughts by the end of the day, and of those, 45,000 are negative. That means, 45,000 times a day, we’re telling ourselves ‘no’, ‘can’t’ or ‘won’t’. It’s subconscious, unintentional, and an incredible amount of time we spend listening to that little Devil with Tourette’s that sits on our shoulder.

One of the biggest problems is that we spend a huge amount of time beating ourselves up and saying the most horrible things to ourselves that we would never say to anyone else. It’s debilitating and gets us caught in a downward thinking spiral that’s difficult to get out of. We spend so much time arguing with ourselves and convincing ourselves why we can’t do things, that it becomes a self-fulfilling prophecy. We allow it to happen because we think nobody can hear us, which may be true, but they hear the other things we say, see the things we do and they feel how they feel when they’re around us.

Your thinking is like a computer – unhelpful thinking is the virus that corrupts your software, slows down the operating system and interferes with installing new apps. When we have less mobility, we turn up in everyday life as versions of ourselves that are letdowns. Whether it’s a physical thing in that we’re not looking after our health, or a psychological thing and our mindsets aren’t right, we pretend to get the job done, but in truth, reek of under-performance. If we want to perform at our best, we have to improve our mobility to get there. If you don’t, you’re the very definition of immobile, which renders you motionless or paralysed. If you can’t escape that cycle, your problems will multiply. 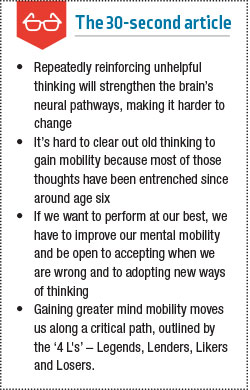 Sounds a bit bleak, but I want you to imagine a spectrum from ‘depression’ sitting at one end, to ‘Oprah’ sitting at the other. Most of us sit somewhere in the middle – we’re not ‘depressed’, but we’re not ‘ecstatic’ either, and the aim is to gain enough mobility to be able to close this performance gap. We have to be able to adapt and move better with the flow of opportunity to better play the game of life because the bridge between failure and performance success isn’t as wide as we think.

Gaining greater mind mobility moves us along a critical path. This is outlined by the

Losers underperform and are immobilised by using phrases such as ‘I can’t’ or ‘It’s not possible’. A mindset shift needs to take place by finding value in what you do, embracing challenges and finding inspiration in others. When you can adopt a growth mindset, you will have made a commitment to want change.

Likers are happy to think small, or not at all; sit on the fence to keep the peace; are generally immobile and admire from the sidelines. Likers need motivation and the resulting action to gain mobility. We have motivation and action the wrong way around – people wait to be motivated before acting, whereas you should act first and the motivation will follow. Just get started.

Lenders are inclined to be in action mode, but can fall off the wagon; experience ‘success’ in peaks and troughs; and form judgements on self and others, but they’re less frequent and less harsh. Consistency is required around actions to level out the win/loss cycles. If you think of your unhelpful thinking as a freeway, by being consistent, we’re creating new thinking ‘off-ramps’ to exit the freeway, directing future thoughts and behaviours. New productive habits equals increased mobility.

Legends recognise thoughts as just that – thoughts; know what they think isn’t reality, but only what they feel in that given moment; and are aware enough to snap out of irrational thinking, gain mobility and get back on track fast. Legends know that they will always be a work in progress, but are moving towards the point where their mind is free from unhelpful thinking and completely mobile. In his ‘The End of History Illusion’ TED Talk, Dan Gilbert points out that people mistakenly tend to think that who they are now is who they will be forever. Legends have mobile minds because they are always exposing themselves to new things, new learning and new ways to live.

Which one are you?

Greg Sellar is a performance coach and serial ‘life hacker’, challenging people to change the way they think and act. With a degree in Sports Science and a Diploma in Coaching, Mentoring and Leadership, he has worked with some of the biggest names in global fitness. gregsellar.com