My friend the sticking point

The sticking point of an exercise is the stage at which you contract as much muscle as possible by as much as possible – so, asks Tony Podpera, why avoid it? 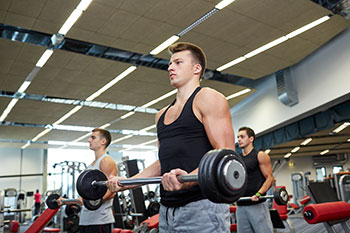 Serious weight trainers know about sticking points. Those few centimetres where a movement becomes really hard. Half way up a biceps curl. Near the beginning of a bench press. Coming out of a deep squat. Many good exercises come with a sticking point and they’re not much fun to work through. In fact, many people avoid sticking points, consciously or otherwise. This is a shame, because succeeding in serious weight training means learning to love your sticking point. Here’s why sticking points are good for you – and how many trainers avoid them, whether they mean to or not.

In a previous article (The Secret Life of Muscles) I explained that your body will only use the necessary amount of muscle at any time to complete a task, and that the body can change the pattern of muscle usage several times a second to account for this.

All of these fibres don’t just contract once: they contract several times during a single rep, often contracting again before they’ve had a chance to fully relax after their last contraction.  As you exit the sticking point and the demand on the muscles starts to lessen, the body will do what it has been programmed to do – rest those fibres which no longer need to contract and complete the movement with the minimum of muscle involvement.

So, if you are using sufficient weight, the sticking point is the only time during an exercise that you can be sure that you are contracting as much muscle as possible by as much as possible – which is the essence of successful weight training.

The best way to benefit from a sticking point is to not avoid it – and the best way to do that is simply to maintain good technique.

Squats probably offer the best example. If an injury-free bodybuilder training for leg size doesn’t squat deeply, it’s probably because he doesn’t want to come back up through a sticking point. It’s very hard work, extremely uncomfortable and there is a risk of failure. So he’ll do half squats, or squats to a bench – anything except deep squats. Alternatively, he may squat down deeply, but then emerge from the squat with his butt sticking out and his torso flattened, finally levering his upper body into a standing position once his legs have fully straightened. This is typical sticking point avoidance technique for squats and effectively removes the load from the working leg muscles just when they would benefit most.

Many compensate for avoiding a sticking point by either using too much weight, substituting an exercise, or both. For example, instead of deep squats, I see a lot of people trying to develop leg size by doing heavy half-squats or very heavy top-half leg presses. Clearly, if top-half squats and leg presses did enough to stimulate muscle growth, most of the guys in the gym would be walking around on tree trunks, and they most certainly aren’t. Biceps curls are another exercise in which sticking point avoidance is common. You can probably identify many others and you’ll even see it in barbell classes (although to be fair, many barbell class exercises are designed to avoid sticking points by shortening range of motion in exercises).

There are legitimate reasons for people to do exercises which may not demand working hard through sticking points. If someone is doing rehab, sports specific work or gentle exercise, there may be good cause to adjust movements so that sticking points are not an issue. And remember, not all great weight training exercises have a traditional sticking point.

If your clients are looking for overall muscle size and strength, however, they need to learn to love the sticking points they may encounter as they train. Occasionally, it’s even worthwhile to build on that work through some additional forced reps and negative reps, courtesy of you, their trainer/spotter.

Ultimately, to avoid a sticking point is to look for a short cut. And we all know how well they work, don’t we?

Tony Podpera
Tony is a Canberra-based fitness instructor. He began bodybuilding in the early 1980s and has advised clients on weight training and strength and conditioning issues for over 20 years. He has been teaching group fitness classes since 1994 and has taught throughout the ACT and internationally.