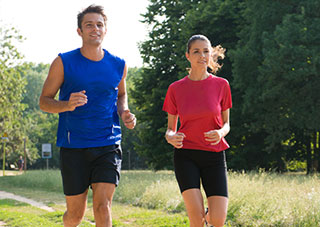 Researchers are calling for a major boost to physical activity recommendations, with a new study linking more weekly exercise to a reduced risk of five common diseases.

University of Queensland researcher Dr Lennert Veerman said a significant boost to physical activity level recommendations to the equivalent of 15 to 20 hours of brisk walking or six to eight hours of running a week could reduce breast and bowel cancer, diabetes, heart disease and stroke.

‘Although the first minutes of activity do most for health, our research results suggest activity needs to be several times higher than current World Health Organisation (WHO) recommendations to achieve larger reductions in risks of these diseases’ Veerman said; ‘WHO advises a minimum total physical activity level of 10 metabolic equivalent (MET) hours a week, but the study found health gains accumulated up to levels of 50 to 70 MET-hours a week.’

‘A lot of previous research had shown the benefits of being physically active, but we still do not definitively know the exact type and quantity of activity that most reduces the risk of common conditions because it is difficult to accurately measure physical activity.’

Veerman collaborated with researchers from the University of Washington and Dartmouth College.

‘By analysing the results of 174 studies published between 1980 and 2016, we found higher levels of weekly physical activity were linked to reduced risk in all five common chronic conditions.’

He said most people could achieve 10 MET-hours per week by running for 75 minutes or two and a half hours of walking per week.

‘People may need to incorporate additional daily activity to achieve 50 MET-hours. This could mean being more active at work, doing housework, using stairs where possible, gardening or running, and using active transport such as walking or cycling. The trick is to incorporate physical activity into daily life, making it a habit rather than a chore.’

The authors said there needs to be greater investment in interventions to promote physical activity due to the ageing population and an increasing number of cardiovascular and diabetes deaths since 1990.

‘Our urban environments also need to change: walking and cycling need to be made safe and convenient’ Veerman said.