RESEARCH REVIEW: Paid to exercise at work: does this make you a ‘professional’ exerciser? 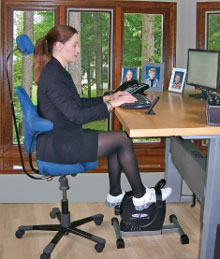 Introduction: How timely this Research Review is for myself and all of my university colleagues. It is week 10 of the university semester and I have 90 mid-term exams to mark (should have been automatically marked, but the scheduling Gods saw otherwise) and 90 scientific papers to assess! To say that our sedentary time (physically, not intellectually) has hit an all-time high is putting it mildly…

While at the 2009 Sports Medicine Conference in Queensland I attended a number of presentations that investigated the detrimental effects of too much sitting. Professor Mark Hamilton’s presentation, for example, could be summed up as ‘sitting too much is not the same as exercising too little’. And there are potent pathophysiological effects due to prolonged sitting, which cannot be cured by exercise training. This information sits heavily with me (excuse the pun), particularly when I am faced with prolonged Homer Simpsonitis a couple of times a year.

Dr Carr and his colleagues conducted an interesting study in which they investigated the effectiveness of cycling exercise on employees who worked in sedentary occupations. They report that previous research has demonstrated that sedentary time is associated with weight gain/obesity and also with an increased risk of metabolic disorders (i.e., type 2 diabetes). On a positive note, the authors reported that there is evidence which demonstrates that if extended periods of sedentary time are interspersed with periods of physical activity, it can result in improved body mass index (BMI), waist circumference and glucose levels. Hint hint.

Methodologies: The researchers recruited participants (average age ~40years) who were overweight (average BMI ~27kg/m2) and worked in full-time (35hrs/wk) sedentary occupations. Sedentary occupations were defined as roles in which the employee spent a minimum of 75 per cent of the working day sitting. Not surprisingly, the majority of the participants were in deskbound/ computer-dependent occupations.

As fitness professionals we are keenly aware that it is extremely difficult to motivate sedentary individuals to exercise. Accordingly, Dr Carr and colleagues offered a financial incentive to all participants ($15). Not quite adequate for an overseas surf trip, but an enticement that worked.

A total of 18 healthy adults volunteered to participate in the study. The researchers used a MagneTrainer
(www.magnetrainer.com) as the desk-based exercise equipment. This device is simply the lower half of an electronic cycle which fits nicely under a desk. It also incorporates a computer software interface (FitXF) which is activated as soon as the person begins pedalling and records the minutes per day they exercise, average speed, distance pedalled and estimated caloric expenditure.

The participants were given access to the MagneTrainer machine for four continuous weeks.

Results: Following the four-week period, the pedalling activity data was downloaded for analysis. On average, participants pedalled for 12.2 days of the maximum possible 20 days (range six to 20 days) which equated to 61 per cent compliance. In terms of duration, the employees pedalled for an average of 23 minutes when they used the cycling device. Although exercise heart rates were not collected, the employees reported an average Borg RPE score of 4.4 (somewhat hard) on the one to 10 scale.

The employees were also asked a number of questions regarding their use of, and access to, the cycling device, where responses ranged from 1 (strongly disagree) to 5 (strongly agree). Overall, the employees reported that the machine was ‘easy to use’ (score 4), ‘an alternative physical activity during inclement weather’ (score 5) and ‘they would use the device regularly at work’ (score 5). The authors also inquired if the employees felt that the exercise was ‘detrimental to their work productivity’ (score 1, strongly disagree), if they were ‘more tired on days they used the machine’ (score 2, disagree), ‘I could conduct a professional phone call while using the machine’ (score 3, neutral) and ‘I could conduct normal computer tasks while using the machine’ (score 3).

Discussion: I am surprised by the low rate of exercise compliance. Not only was the device available to participants every minute of their workday, but it was most conveniently at their feet (out of sight, out of mind?), and they were paid to use it! So what barriers did the employees have that prevented them from using it? It’s disappointing that each of the participants did not utilise the device for at least five minutes every day it was available to them, however, this further confirms the difficulty fitness professionals face in getting individuals physically active. On a positive note, the employees who utilised the device were not far off reaching the American College of Sports Medicine guidelines for healthy adults with 23 minutes exercise per day. Perhaps it should be mandatory for all office desks (especially in universities!) to include a MagneTrainer!

Pros: The premise supporting this research is brilliant. Professor Stephen Blair, a world renowned epidemiologist, also recently reported findings from a study investigating ‘sitting’. He reported that men who sat for more than 23 hours per week had a 64 per cent greater risk of dying than those who only sat for 11 hours a week. He further added that when the big muscles of the back and legs are not moving, the metabolism slows down, leading to less desirable levels of blood cholesterol, blood sugar and an increased waist circumference – all of which contribute to an increased risk of diabetes and heart disease (among other health problems).

Cons: It would have been interesting to have conducted a six to 10-week trial to see if there would have been improvements in weight (and subsequently BMI), resting blood pressure, fitness and glycaemia (fasting plasma glucose), and to report the increased caloric expenditure over the longer period.

Dr Mike Climstein, PhD FASMF FACSM FAAESS
Dr Mike is doing a literal ‘sea change’ from his local area on the Northern Beaches of Sydney up to the Gold Coast, QLD where he is joining Exercise Science in the Faculty of Health Sciences and Medicine at Bond University. Dr Mike is recognised as one of Australia’s leading accredited exercise physiologists working with patients suffering from a wide array of chronic diseases and disorders.

Joe Walsh, MSc
Joe is an associate lecturer in the School of Exercise Science at the Australian Catholic University. He is a highly experienced researcher and is the national team leader for research methods units at the university. He and Dr Mike have authored numerous publications with findings presented at international conferences in Europe, Asia and North America.