RESEARCH REVIEW: what goes around comes around?

A study sets out to test a manufacturer’s claims that hula hooping using a weighted hoop stimulates muscle activity. 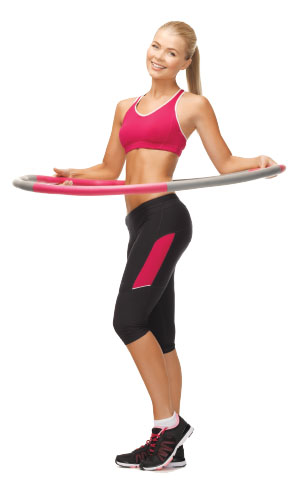 Introduction: It is common for academics to encourage our students who need to complete research projects as part of their undergraduate studies to ‘try and think outside the box’. And we have to admit that a number of very bright students have developed some quite ingenious research projects in exercise and sports science. Fortunately, it also makes for great teaching… and sometimes an interesting and surprising result emerges. Case in point: the physiological benefits of hula hooping. Yes, hula hooping.

The hula hoop dates back thousands of years, with Native Americans using hoops made of dried willow, rattan or stiff grasses in traditional dances for storytelling. The modern plastic version was designed in the late 1950s (allegedly inspired by bamboo exercise hoops seen in Australia) and gained huge popularity when Melin and Knerr’s Wham-O toy company marketed them, with more than 100 million sold in two years. These days the acrobatic entertainers of Cirque du Soleil are performing some incredible moves with this humble ‘toy’!

So, let’s move on to the study by Dr McGill and his colleagues. We were surprised to see that the hula hoop has actually been researched since the 1960s – although, admittedly, only a couple of studies have been completed since that decade. Dr McGill’s interest in the hula hoop stems from its use as part of the physical education curriculum in elementary school children across the Pacific, and also as part of a novel fitness program for young girls. Given Dr McGill is the director of the Spine Biomechanics Lab at the University of Waterloo, it’s not surprising that his interest is in the potential benefits of the hoop on isometric back muscles and back pain.

Method: Dr McGill decided to conduct this study as the hoop manufacturer claimed that hula hooping with a weighted hoop (1.02m in diameter, 1.7kg), with a knobby surface on the inner ring, would stimulate muscle activity. To determine if there were indeed benefits, McGill and his colleagues recruited healthy females (30 to 60 years of age) with no history of back pain to complete a six week trial using a weighted hula hoop. They investigated variables such as anthropometrics (waist and hip circumference), torso muscular endurance (static V-sit for time), isometric endurance (planking front, right and left) and skinfold measurements (sum of 5: triceps, biceps, subscapular, iliac crest and medial calf). All participants attended a supervised class once per week and were instructed to use the hoop on their own for four additional times each week for six weeks. Both the supervised and unsupervised self-training programs started at 2 minutes in week one, progressing to 6 minutes; 14 minutes in week 2; and 15 minutes in weeks 3 to 6.

Results: The program had good compliance, however, only a small number (n=13) of females participated. The researchers found a significant improvement (decrease) in hip circumference, which decreased by 3.4cm, and in the waist-to-hip ratio (-1.4cm). Surprisingly, there was no decrease in weight, or improvement in the isometric endurance (plank tests) or the sum of 5 skinfolds over the six weeks.

The authors commented that although there was no change in body weight, the most probable explanation was that there was a shift in body composition from the torso to the upper extremity.

Pros: An interesting study, and not unexpected to see that yet another manufacturer’s claims are found to be unsupported. Admittedly, we thought we would have seen a significant improvement in isometric endurance. The participants did increase their V-sit by (on average) 19 seconds. However, participants actually worsened, slightly, on the left side plank and Biering-Sorensen spinal muscle evaluation. Also, skinfolds (triceps, iliac crest and medial calf) actually worsened.

Cons: The authors should have reported compliance for the supervised and self-training individually. Although a number of their outcome variables did not improve over time, the authors should have inquired (via a survey) whether the participants found the hula hoop to be an enjoyable form of non-traditional exercise. Given the high percentage of individuals not meeting the American College of Sports Medicine physical activity/exercise guidelines (> 150 minutes per week), perhaps hula hooping could be an attractive, enjoyable form of non-impact exercise to currently sedentary individuals. Consumers looking to improve health and fitness are constantly offered new fad products with promises of unsubstantiated results. In this case the new fad product was a return to a historical fad, the hula hoop. While this form of exercise may be fun, this study is a reminder of a trainer’s responsibility to objectively evaluate any new fitness trends and provide appropriate exercise choices for their clients. In the face of exercise fads, long established fitness methodologies often provide a more reliable exercise option.

Associate Professor Mike Climstein, PhD FASMF FACSM FAAESS is one of Australia’s leading Accredited Exercise Physiologists. He is the program director of Clinical Exercise Science and co-director of the Water Based Research Unit at Bond University’s Institute of Health & Sport. michael_climstein@bond.edu.au