Should we hide the vegetables in kids’ food? 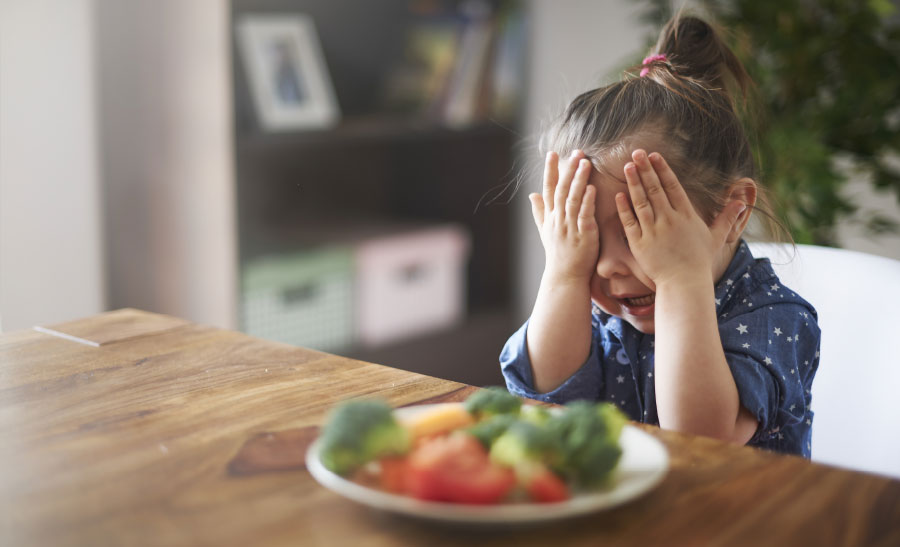 Kids couldn’t care less about eating nutrient-rich vegetables, so it can be tempting to blitz and bury them within meals. But, asks dietitian and nutritionist Skye Swaney, could ‘hiding the vegies’ actually be detrimental in the longer term?

We’re often told that kids need to eat around five serves of vegetables each day, equivalent to two-and-a-half cups, but this can seem laughable to the parent of a child who flatly refuses to even look at a vegetable. The saying ‘easier said than done’ has never been truer.

Vegetables provide vitamins, minerals, dietary fibre and many phytonutrients (nutrients naturally present in plants) that are vital to kids’ growing bodies. They may also help protect against chronic diseases such as heart disease, stroke and some types of cancers later in life. Research, however, shows that only 9% of 4-8-year-olds in Australia – and only 5% of 9-13-year-olds – eat the recommended daily serve of vegetables.

We know how important vegetables are in a child’s diet, but kids couldn’t care less. Dealing with a child who shuns vegetables can be stressful, so it’s no wonder many parents resort to ‘hiding the vegies’ in meals and snacks. In fact, such is the desperation of parents that it’s given rise to a variety of best-selling books on this very topic!

The problem with hiding vegetables

Pureeing vegetables to hide in a meal can certainly be a great way to boost the vegetable content of your usual dishes, such as spaghetti bolognaise, lasagne and cottage pie. Unfortunately, it’s a short-term solution, and one that you may end up paying for later. The issue with hiding vegetables is that children don’t learn that they’re a normal part of a meal. Nor do they get to learn about the taste and textures of vegetables and the different ways in which they can be cooked, so it ultimately denies them the chance to explore whether they do, in fact, like them. It can also lead to suspicion of foods and lack of trust, further exacerbating fussy eating.

There is also the issue of sending confusing messages to kids. We may understand the difference between a beetroot brownie vs a regular brownie, but kids won’t necessarily have that same understanding, and instead the message received on their end is that brownies are healthy.

Why won’t my child eat vegetables?

It’s important to remember that kids are naturally afraid of new foods – it’s called neophobia and is an inbuilt survival instinct to prevent them from eating something they shouldn’t. In some ways, we can be thankful for this as it, hopefully, stops them from eating dangerous things they come across. But it also means that it can take many exposures to a new food before it’s accepted – up to 15 in fact!

There’s also the issue of taste. Vegetables, particularly green vegetables, often taste bitter to kids, a taste that we have grown used to through repeated exposure. This also applies to foods such as coffee, dark chocolate and wine – most of us didn’t like these things the first time we tried them!

What can we do instead?

Most parents encounter the challenge of getting kids to eat enough vegetables at some point, with even carrot-chomping toddlers’ tastes changing and becoming fussier as they get older. By exposing kids to a wide range of veggies at mealtimes and employing the techniques above, you can encourage greater acceptance and intake of vegetables by the kids in your life.

An Accredited Practicing Dietitian and nutritionist with over 12 years’ experience, Skye is the consulting nutritionist for Go Kidz. Go Kidz make nourishing ready-made meals for busy families who want to ensure every family member is getting the right amount of veggies per serve.