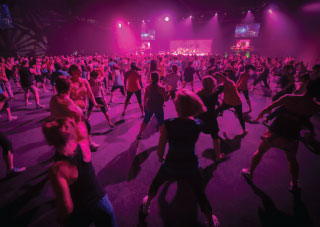 Ever want to gorge on fatty foods after partying all night? There’s a reason for that. US research has shown that sleep deprivation alters the brain’s decision making processes, increasing the desire to consume fatty food.

A team from the University of Pennsylvania’s Perelman School of Medicine found that the effect became apparent after the loss of one night’s sleep.

Senior study author Hengyi Rao said, ‘The main finding of this study is that one night of sleep loss altered function within the brain’s ‘salience network [a pathway in the brain thought to guide decision-making].’

The researchers enlisted 46 healthy, non-smoker, mostly non-obese adults aged between 21 and 50. All participants reported usually sleeping for between 6.5 and 8.5 hours a night and suffering no significant sleep disturbances or medical or psychological complications.

The study subjects spent five consecutive days (and four nights) in a sleep laboratory. The first night they got a full night’s sleep, providing the researchers with a baseline from which to measure normal network function following good sleep, through the use of a brain scan. The next stage of the study saw 34 of the participants assigned to a sleep-deprivation group for the following night. They were kept awake all night, while the other participants slept for eight hours.

After another round of brain scans all participants partook in reading, watching TV and playing video and board games, and ate as they chose, ordering food from a menu. All food intake was recorded.

Commenting on the study findings, Derk-Jan Dijk, director of the Surrey Sleep Research Centre in the UK, said that, although in the real world it is not total sleep loss that is the main problem, but chronic insufficient sleep, ‘the current study is important because it provides hints to the brain mechanisms involved in the link between sleep loss and changes in food intake.’