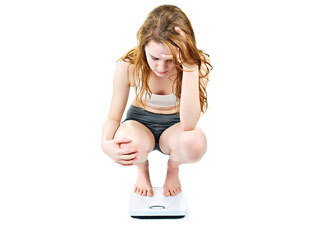 Up to one-third of young Australian women experience episodes of binge or overeating, with socially disadvantaged women at greater than average risk.

Researchers from The University of Queensland, Stockholm University and the Karolinska Institutet in Sweden have found that four per cent of women aged 18 to 23 reported symptoms of bulimia nervosa, but the incidence of milder eating disorders was much greater.

UQ School of Public Health’s Professor Gita Mishra said 17 per cent of women reported episodes of overeating, 16 per cent reported binge eating and 10 per cent reported compensatory behaviours such as vomiting, use of laxatives or diuretics and fasting.

‘The results highlight the large burden of both transient and persistent milder and undiagnosed forms of disordered and overeating in this age group’ Mishra said.

The study, published in Public Health Nutrition, analysed data from more than 6,800 participants in the Australian Longitudinal Study on Women’s Health (ALSWH), building on earlier work on social and early life causes of eating disorders at the Centre for Health Equity Studies (CHESS) in Sweden.

Professor Ilona Koupil from CHESS said the research showed there was an increased risk of binge eating or overeating among socially disadvantaged women.

‘There was also increased risk among young women who reported smoking and binge drinking, suggesting a possible overlap between substance abuse and eating disorders’ Koupil said.

The researchers believe social patterns could be used to identify at-risk groups and those in need of early diagnosis and secondary prevention.

‘We were intrigued to see a higher risk of binge eating and bulimia nervosa among women of European origin and in those who had been overweight or obese in childhood’ Koupil said; ‘We hope our results prompt further efforts to monitor prevalence of these common disorders among young women in Australia and overseas.’

The researchers said more investigation was needed into long-term health outcomes and consequences of disordered eating.

It’s time to update Australian Guidelines on eating disorders
A committee of medical experts, fitness industry representatives, and individuals with their own lived experience have come together to update the fitness industry’s guidelines for identifying and helping clients and members with eating disorders and excessive exercise behaviours – and your help is requested.

Please help us shape the industry by sharing your knowledge and experiences in this survey now, before it closes.