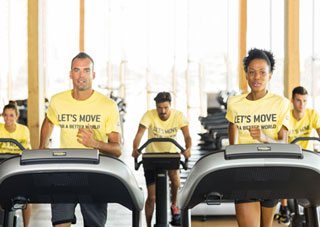 Fitness equipment provider Technogym has announced the winners of its Let’s Move For a Better World challenge, a global social campaign to fight childhood obesity, that ran in March this year.

Worldwide, 513 clubs across 21 countries took part in the challenge and approximately 122,000 participants tracked their workouts on Technogym equipment, resulting in 400 million MOVEs (Technogym’s unit of measurement for movement) and 170 million calories burned.

In Australia, WaterMarc Banyule took out the top spot, with the club’s members collecting more than 1.7 million MOVEs. As winner of the challenge, the club gets to donate state-of-the-art Technogym equipment to a nominated cause and has chosen local school Montmorency Secondary College to be the recipient.

The Let’s Move campaign was created three years ago to help tackle the global issue of childhood obesity. If current trends continue then by 2025, 70 million children under the age of 5 will be overweight or obese.

‘Now in its third year, the results of the 2016 Challenge have far exceeded expectations’ said Nerio Alessandri, President and Founder of Technogym; ‘This is an incredible testament to what can be achieved when enterprises, communities and technology work together to make a difference.’