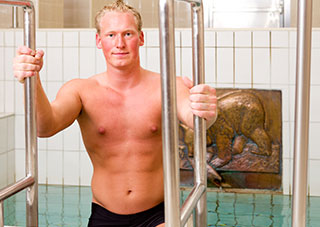 To dunk or not to dunk? First, researchers discovered cold water immersion after a workout can ruin your gym gains. Now there’s evidence hot water immersion does the same.

Hamish McGorm from The University of Queensland School of Human Movement and Nutrition Sciences will try to resolve the quandary on an upcoming research mission to New Zealand.

‘After it was shown that cold water immersion inhibits muscle mass development, we did expect that hot water immersion might provide the opposite effect’ McGorm said; ‘Preliminary testing suggested that cold water immersion led to poor muscle regeneration, but heat helped. However, our testing on 16 human participants over a 10-week period demonstrated no improvements in strength and a reduction in muscle mass development with regular application of hot water immersion. What needs to be done now is molecular analysis to explain why we are getting these results, which I plan to begin in New Zealand later this year.’

‘It could be that we made the conditions too hot, or too stressful for the group that underwent hot water immersion, which was set at 45 degrees Celsius’ McGorm said; ‘At this stage we can’t recommend this as a recovery strategy until we have more detailed data. This is a very important study for a broad range of athletes, given the amount of time needed to increase lean muscle mass, which instead could be spent on developing and honing specific skills.’

Testing in New Zealand will be supervised by Professor David Cameron-Smith, who specialises in the molecular aspects of resistance exercise adaptation at the Liggins Institute, University of Auckland.