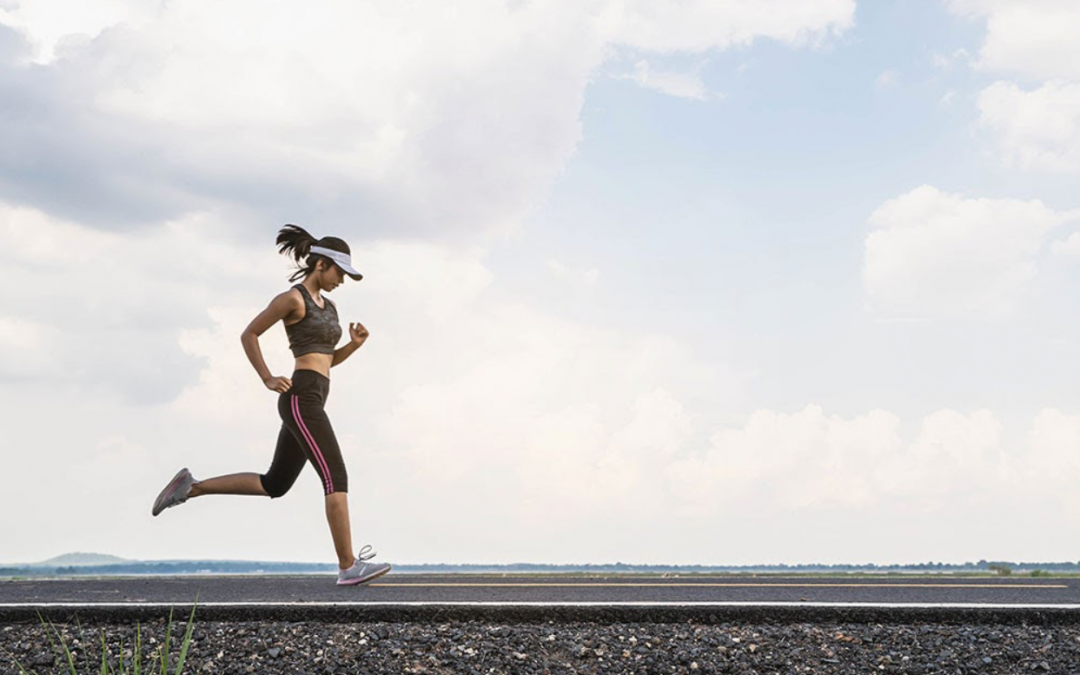 Few female runners or coaches take the menstrual cycle into consideration when planning training, but by working with, rather than against, fluctuations in oestrogen and progesterone levels, you can structure training to optimise results, writes Dr Jason Karp PhD.

Atalanta, the Greek goddess of travel and adventure, was known for her athletic prowess that rivalled that of most men. Warned against marriage by an oracle, Atalanta came up with a plan to marry only a suitor who could beat her in a race, killing those who failed to outrun her. “I am not to be won till I be conquered first in speed. Wife and couch shall be given as prize unto the swift, but death shall be the reward of those who lag behind,” she exclaimed in the Roman poet Ovid’s Metamorphoses.

Many would-be suitors were beaten until Hippomenes fell in love with Atalanta and wanted to marry her. When hearing of the challenge, he was skeptical, but when Atalanta took off her outer garments for her next race, that was all he needed to send in his race entry. There was one problem, however. He knew he could not beat Atalanta, so he asked for help from Aphrodite, the goddess of love. Aphrodite provided Hippomenes with three golden apples to drop on the race course to distract Atalanta. During the race, whenever Atalanta pulled ahead of Hippomenes, he rolled one of the golden apples off the course, tempting a curious Atalanta to stop and pick up the fruit. Atalanta’s frequent stops to fetch the apples were just enough for Hippomenes to win the race and Atalanta’s hand in marriage.

The large fluctuations in the menstrual cycle’s major hormones – oestrogen and progesterone – affect the female runner’s hormonal environment and, therefore, her physiology and training.

A textbook menstrual cycle is 28 days (but can last up to 35 days) and is divided in half by ovulation on day 14, as the egg is released from the ovary. Although the menstrual cycle is complicated, an easy way to think of it is that the first half – the follicular phase – begins with the period and is dominated by oestrogen; the second half – the luteal phase – begins with ovulation and is dominated by progesterone, although oestrogen is also elevated in the middle of the luteal phase. The luteal phase ends with the start of the period, and the cycle starts over again. 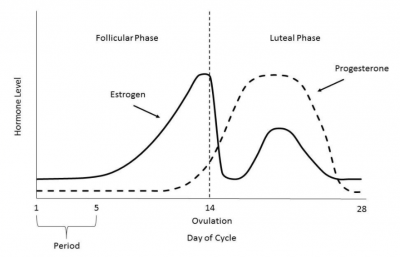 FIGURE 1: Changes in Estrogen and Progesterone Across the Menstrual Cycle

In a perfect physiological environment, the menstrual cycle will occur every month and always be the same duration. But that doesn’t always happen, especially among women who train with high volumes and high intensities and have a low percentage of body fat. They often experience irregular or even absent menstrual cycles, which reduce oestrogen levels.

In response to heavy training, the first change in the menstrual cycle is a shortening of the luteal phase, followed by cycles without ovulation and, finally, cessation of menses, called amenorrhea, which is defined as having three or fewer periods per year, and results in constantly low levels of oestrogen and progesterone. An amenorrheic runner experiences an oestrogen-deficient state similar to that of a postmenopausal woman.

Any disruption to the menstrual cycle can cause a decrease in bone density, increasing the risk for osteoporosis and stress fractures. Female runners with irregular or absent menstruation have significantly lower bone density than runners with regular menstruation and even compared to nonathletes, particularly at the lumbar spine.

An irregular menstrual cycle makes planning the training more complicated than when not having a menstrual cycle at all, because you can’t predict the months that will have a normal cycle and the months that won’t, unless the cycle is ‘regularly irregular’ and therefore predictable. If the cycle is ‘irregularly irregular’, you need to plan the training month-to-month or even week-to-week.

With no menstrual cycle, women can train without consideration to the hormonal environment, since oestrogen and progesterone won’t fluctuate throughout the month. It’s perfectly okay to run a lot without a menstrual cycle. However, in the face of a lack of bone-protecting oestrogen, you need to take extra precaution in regard to your clients’ bone health, especially if they run a lot. Meticulously planning the training so that they avoid rapid increases in volume and intensity, calcium and vitamin D supplements, oral contraception to provide oestrogen, and intense strength training to increase bone density can all help mitigate the risk for bone injuries.

Your female running client’s training program must always be open to change, moving workouts around based on the menstrual cycle’s hormonal fluctuations and on how she feels. However, few female runners or coaches take the menstrual cycle into consideration when planning training, in regard to both optimising the training and injury prevention. They tend to spend too much time working in their training rather than working on their training.

Working on the training means developing a system of training that is specific to female runners. It means developing a system that works. The menstrual cycle is that system. But, guess what? You don’t need to create the system yourself. The menstrual cycle already exists. The system is already made for you! You only need to listen to it and follow it.

“Once you have the pattern, organise their training around the menstrual cycle so that they run more and harder when they feel good, and less and easier when they don’t feel good”

Before trying to get fancy or sophisticated with menstrual cycle-based training, the simplest (and most insightful) way to implement the system is to keep track of how your clients feel and perform during their normal training. Write down each day of their menstrual cycle, the data from their workouts, and how they felt during each run. After a few months of documentation, you’ll likely notice a pattern. While harder workouts may be more challenging during their period, easy running may actually improve their mood and alleviate physical symptoms associated with their period.

Once you have the pattern, organise their training around the menstrual cycle so that they run more and harder when they feel good, and less and easier when they don’t feel good. That may sound simple, but most runners like to stick to a training plan, rather than be flexible, with their plan being fluid. To squeeze the most out of their training, your plan should be fluid, working with, rather than against, their physiology.

Plan increases in training volume to coincide with the follicular phase (especially week 2), when oestrogen is high. Refrain from increasing (or slightly reduce) weekly mileage during their period and at times of the month when oestrogen is low – early and late luteal phase (early in week 3 and late in week 4). Avoid challenging workouts around their period, especially if they don’t feel well or if they have major cramps or feel bloated (bloating occurs from the rapid drop in progesterone as women transition from the luteal phase to the follicular phase). 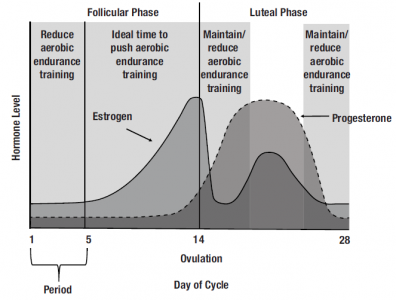 The intensity of training can also be planned according to the menstrual cycle. For example, if your client has a 28-day cycle starting on Monday, and her period occurs on days 1 to 3 (Monday to Wednesday), plan the hard workout, like a long tempo run or intervals, in the second half of the week to avoid her period. If two workouts are planned that week, schedule them either on Thursday and Saturday, Friday and Sunday, or Thursday and Sunday, or use a block periodisation model, in which you congregate the stress with two to three hard workouts during the oestrogen-high week 2 of the menstrual cycle, and just one hard workout the week of her period and the other two weeks. This block periodisation approach also works well if her period lasts five days (Monday to Friday). 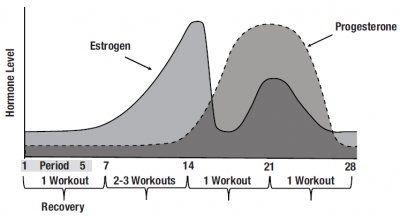 Use the science of the menstrual cycle as your guide to create the basic structure of your client’s training, and manipulate the details based on how she feels. With time, unless a client has an irregularly irregular cycle, you will likely notice patterns that you can use to plan and manipulate her training. And if she trains smart enough, she may even be able to beat Atalanta in a race… without having to roll a golden apple to distract her.

Jason is founder and CEO of the women’s-specialty run coaching company, Kyniska Running (kyniskarunning.com). He is also an award-winning coach, exercise physiologist, and author of 12 books, including Running for Women. His REVO₂LUTION RUNNING™ certification has been obtained by coaches and fitness professionals in 25 countries. kyniskarunning.com / revo2lutionrunning.com