Speaking the language of inclusion

To get more people involved in organised exercise, we must be more inclusive. From increasing cultural awareness to learning simple language skills, instructing beyond your comfort zone will reap benefits for everyone involved, writes instructor Mel Morony.

Imagine it is your first time doing a Group Fitness class. You make enough sense of it to participate and at the end you feel like you have achieved something. Now change a variable – imagine you are a vision or hearing-impaired person, or that you are from another country and do not speak or understand much English beyond the basics. Imagine how much you would have been able to participate in that class. Would you have even felt welcome?

The value of ‘inclusion’

It is common for fitness facilities to have some sort of values stance, either established by themselves, or by the organisations that they are part of. These values often encompass the concept of inclusion. But if asked how we show inclusion in our facilities, what would be our response?

Would it be a knee-jerk, ‘Of course, anybody can join us!’ as we point out the gender-neutral wash-rooms and bilingual signage? Would we point to our compliance with the Anti-Discrimination Act (assuming no exemptions have been granted) in relation to people who have a protected attribute and decide that was sufficient?

Being ‘open to everybody’ may be confusing inclusion with tolerance. While related to inclusion, tolerance is defined as ‘the ability/willingness to tolerate the existence of opinions or behaviour that one dislikes or disagrees with’ – which is good, but can take a ‘live and let live’ attitude. Feeling tolerated is not the same as feeling included. If an organisation has provided structures to facilitate inclusion, that is great, but do we really expect structures to replace human engagement and connection? Moreover, if the measure of any of our values is what is enshrined in the law, then what need is there to have it as a value?

“Feeling tolerated is not the same as feeling included.“

Inclusion is defined as ‘the act or state of including or of being included within a group or structure.’  From the perspective of a Group Fitness Instructor, how can we make our classes more inclusive, particularly for those who, for various reasons, might have trouble understanding what is going on? Though this article is in no way exhaustive, my hope is that it will provoke thought and discussion about how we can create a more inclusive environment in our fitness facilities that results in more people participating in exercise.

As instructors, we all have a preferred style of instructing, one that we like and are comfortable with. For some, this might be predominantly non-verbal, for others verbal, and others still, highly structured, perhaps introducing a move, a progression and maybe even an explanation of the move.

Whichever style is your preference, consider how it would work if a class participant was unable to see, hear or understand what you were doing or saying. Adapting an instructing style to accommodate different participant requirements, usually at short notice, can push us outside of our comfort zones. It can even feel like we are learning how to instruct all over again. In addition, we might have to be satisfied with ‘near enough’ for some movements, as long as they are safe. For example, when a vision impaired person attended one of my aqua classes for the first time, I tried to explain what a rocking horse was. In response, the participant said ‘So it’s like a lunge?’ Perhaps I could have tried explaining it in a different way, but I also realised that that could actually be more confusing, so I decided that their interpretation in that instance was near enough.

If we are seeking to be inclusive in our classes, it may mean that whole parts of our class plan will have to be altered – in part or entirely. An example would be a format that involves a lot of explaining as opposed to direct demonstrating. How might we communicate our expectations to someone who is hearing impaired? Consider also someone who speaks one of the many languages spoken in Australia (in Melbourne alone there are 251 documented languages) but has limited English. Interestingly, Australia has no ‘official’ language, but English is obviously the common one, the ‘lingua franca’.

We may find ourselves on a learning curve, even taking cues from our participants. For example, the command ‘Extend your leg out’ may make sense if people can see, even if they do not know what an extension is. A vision impaired person, however, may ask ‘Which way out?’ When we show them in a tactile manner it teaches us that, in future, a clearer instruction would be ‘Straighten your leg forwards’.

There will be disparity between teaching a class at a textbook level of excellence and one that is seeking to be inclusive of the needs of all those in attendance. As mentioned, the latter is likely to be uncomfortable initially, and we may find ourselves sacrificing our egos for it. With practice, however, it is possible to become more accustomed to it and grow as an instructor. As Carol Syer, one of the co-founders of Enable, has previously written with regards another aspect of inclusion, ‘Learning to include everyone in your workouts will improve your communication skills and make you a sought-after instructor.’ 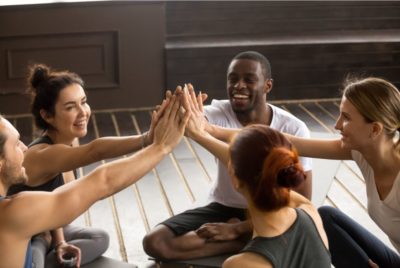 Instructors are expected to build rapport with their participants. As humans, we like people like ourselves. Thus, it is natural for us to gravitate to the people who are like us – people who use the same language and have the same customs and value systems. Branching out of that can be daunting and bring us into contact with ideas and behaviours that we have never even imagined. For example, a participant from a vastly different culture to ours might have a very different understanding of time, or of family and kinship terms. They may even speak a language that does not use an alphabet, but rather an abugida, such as in a number of South East Asian languages*. However, the rewards of exposing ourselves to these differences can be priceless.

“How can we make our classes more inclusive, with a focus on those who might have trouble understanding what is going on?“

While we may plead language as a barrier, most people from different countries do know what the words ‘Hello’, ‘Goodbye’, ‘Please’ and ‘Thank you’ mean in English, so the least we can do is use them frequently with participants. However, what if, once we’ve found out what their native tongues are, we were to surprise them by saying some of those words or phrases in their languages? With travel phrase books and translation apps we have the resources to learn at least a few friendly phrases at our fingertips. Speaking from personal experience, if we mix up the pronunciation, our patrons are so happy to hear their instructor have a ‘go’ at their language that they will happily correct, and there is no shame in learning from our patrons. Even if they speak English fluently, speaking the language of their country of origin is a winner for building rapport. 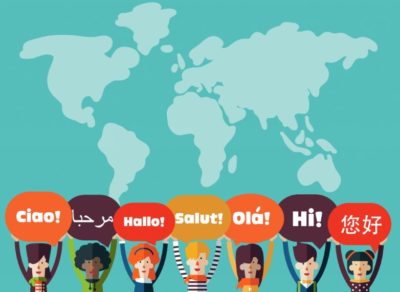 Here are a few other ideas for increasing the inclusivity of your group fitness classes.

This has been a surprisingly difficult article to write, as it has highlighted to me how much further I need to travel along the road to inclusivity. Being inclusive requires us to step out of our comfort zones, and that can be tough. Is it worth it? If we consider that our goal is to get more people off the couch, moving, and transforming their lives through exercise, the answer is a resounding yes!

LEARN HOW TO GREET YOUR CLASS IN AUSLAN

CLICK HERE to watch Mel demonstrate how to give a friendly class greeting using AUSLAN, the Australian sign language.

Mel is a group fitness instructor based in Eastern Melbourne. She is passionate about raising standards in the area of group fitness, for both participants and instructors.