By thinking outside the box and using the edge of the pool as a training tool, you can deliver an awesome and original aqua workout. 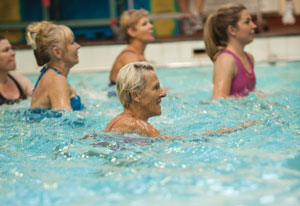 How many times have you turned up to instruct your aqua class with a class plan in mind, only to be told that ‘due to restrictions in the pool today, you only have one lane available’?

Well, it’s time for Plan B to look like a well-polished Plan A.

One constant that we have in the pool is an edge. So, the edge of the pool/wall/barre is where we should focus our exercises. For an entire 45 minutes? Yes, why not?

The wall of the pool offers some fantastic advantages: 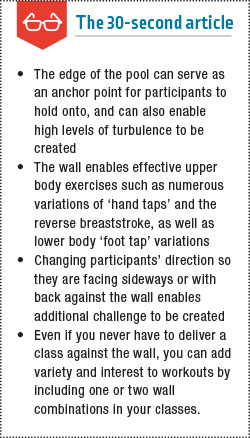 Let’s begin by looking at some simple moves for the upper body that use the wall as a training aid.

With participants facing the wall, keep them at arm’s length from the wall for a move that I refer to as ‘hand taps’. By using this term, as opposed to ‘hit’ or ‘punch’, participants will only touch the wall lightly. This movement requires your participants to engage their stabilising muscles. Variations on this exercise can be alternating taps, cross taps, single arm taps, unison taps, and diagonal tap with a triceps kickback.

Another favourite is the reverse breaststroke arm movement. This is very effective, as it forces the water into the wall and therefore causes a great amount of turbulence as the water pushes back to the participant. Variations on this movement are both arms in unison, alternating arms and infinity arms.

Moving to the lower half of the body, the options are limitless.

Keep your participants at leg’s length from the wall for the movement I call ‘foot taps’. Again, using the term ‘tap’, rather than kick, prevents the incidence of any injuries caused by over-enthusiastic participants kicking the wall too hard. Variations on this exercise can be alternating foot taps, single foot taps and unison foot taps.

By changing the direction of participants’ position in the pool you can create even more challenges to the above exercises.

When standing sideways to the wall, I like to work with two angles. An angle of 45˚ allows for really dynamic knee repeater movements. Adding a sprinting single arm movement to this delivers a great cardio boost. An angle of 90˚ is great for leg movements such as leg swings, hamstring curls and gluteal bounces, all of which are performed in the sagittal plane.

This position is also great for hip abduction movements in the transverse plane, and then, of course, a combination of both these moves.

Time to hit the wall!

There are numerous combinations of exercises that you could put together to create a fun, interesting and functional workout against the wall, but here are two tried and tested ones to get you started.

This combination is an amazing cardio routine using lower limb large muscle groups. With the left side of the body to the wall, lightly hold the wall with the left hand and perform 8 reps of each of the following moves with the right leg.

Turn to other side and repeat with the other leg

This combination provides a great oblique workout. Increase the intensity by adding a jump on the supporting leg while performing the diagonal leg kicks. Facing the wall, hold arms across the chest with open hands (to maximise resistance) and perform the following moves.

Repeat from the top

I encourage all instructors to develop a repertoire of combinations to perform at the wall. You’ll be surprised how many you already know and have in your exercise cache. Even if you never have to deliver an entire class against the wall, it’s worth considering the variation and interest that you can add to your classes by including one or two combinations against the wall in every class.

Debi Godfrey has been teaching aqua fitness for over two decades, both in South Africa and then in Australia when she moved to Sydney in 2000. In addition to her Liquid Barre program for deep and shallow aqua, Debi teaches Aqua Zumba and Gymstick H2O.