Even 10 mins activity is enough for kids’ health gains 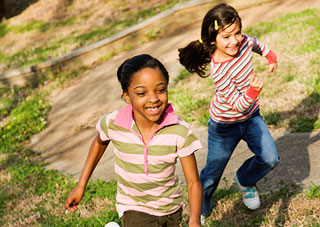 Research from Finland has found that as little as 10 minutes a day of high intensity exercise can significantly reduce reduce body fat and increase cardio fitness in children.

The study by a team at the University of Eastern Finland in collaboration with a team from the University of Cambridge looked at the associations between physical activity levels and body fat and cardio fitness in 410 children aged 6 to 8 years.

The study, published in Sports Medicine, found, unsurprisingly, that the less exercise children did, the higher their body fat levels. A relationship also became evident between intensity of activity and fat levels.

The interesting thing was the large impact that relatively small amounts of physical activity had on the children’s fat levels.

Those doing as little as 10 minutes of high-intensity physical activity daily had 26 to 30 per cent less central body fat than their sedentary counterparts, and better cardio fitness.

Even kids who took part in moderately intense activity for a short time reaped some of these benefits.

A release from the study team said: ‘Increasing the amount of physical activity at various intensity levels and reducing the amount of sedentary time seem to be an important way of preventing overweight and enhancing cardiovascular fitness in childhood. ‘