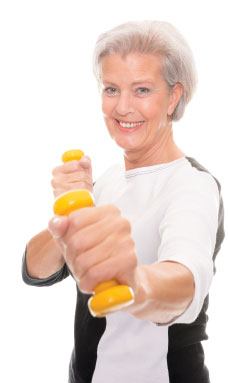 Introduction: Age-related reductions in bone mineral density (BMD) occur at most skeletal sites after the third or fourth decade in men and women and such reductions are typically accelerated in women after menopause. Fortunately, it is now well established that resistance training can help maintain and improve bone mineral density in post-menopausal women. Typically, high-intensity (or high-load) training interventions using training loads over 75-80 per cent of one-repetition-maximum (1RM) have been more successful at improving BMD when compared to low-load training (<50 per cent 1RM) interventions, although the low-load interventions assessed have also used relatively low repetition ranges. Interestingly, when training volumes are equivalent both low- and high-load training may be similarly effective at improving BMD.

Low-load very high-repetition resistance programs such as BODYPUMPTM are available in over 14,000 fitness facilities globally. This pre-choreographed group class uses light weights and very high (80-100) repetitions for each exercise, so it provides a platform to assess the effect of low-load very high-repetition resistance training and as recent trends indicate that a growing number of over 55s are undertaking fitness facility-based activities, the apparent effectiveness of such activities warrants examination. Furthermore, social factors are a key motivator for exercise participation in middle-aged and older adults so participation in a group class may promote greater compliance among participants and provide prolonged benefits.

Methods: Apparently healthy women aged between 58 and 75 years were invited to take part in the study. All participants were recruited through local advertising and an adult education facility. All participants were physically active non-fallers who had not undertaken formal resistance training in the previous year. All women were at least five years post-menopausal and provided details of medical history and current medication use. Exclusion criteria included: acute or terminal illness, myocardial infarction in the past six months, recent low impact fracture, osteoporosis, use of hormone replacement therapy (HRT) and other medications known to affect bone metabolism in the previous two years, or any condition that would interfere with moderate intensity exercise participation. A total of 50 women took part in the intervention and were allocated to either the intervention group (PUMP) or control group (CON). PUMP participants were instructed to attend two BODYPUMPTM classes per week for six months. 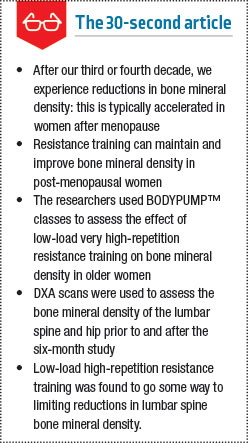 Participants were tested on two occasions: the first assessment was conducted prior to the beginning of training and the second assessment was conducted immediately after the six-month intervention. Body composition assessments were performed using dual energy x-ray absorptiometry (DXA – see feature on DXA in Network Autumn 2015). Participants were overnight-fasted and had not undertaken any exercise on the morning before measurements. Bone mineral density of the lumbar spine (antero-posterior L2-4) and hip (femoral neck, total hip and trochanter) were assessed. Assessment of 1RM was conducted for the incline leg-press (Calgym, Australia) and Smith machine bench press (Elite, Australia).

Dietary intake was assessed from self-reported three-day food records completed at baseline and follow-up. Participants were instructed to record the type and amount of all food, drink and supplements consumed over three consecutive days. All records were entered into FoodWorks 7 (Xyris Software, Australia) and daily consumption of total energy (kJ), protein (g/kg body weight) and calcium (mg) were analysed. Energy expenditure derived from exercise and physical activity was estimated by a seven-day activity diary. A metabolic equivalent value was assigned to each activity and was used to determine the average amount of energy used for exercise/planned physical activity during the program for both groups.

Results: Mean BODYPUMPTM attendance was 48 (± 12) classes over 26 weeks (range = 16-52 classes) resulting in an attendance compliance of 89 per cent. There was an increase in the amount of weight lifted during BODYPUMPTM (in terms of percentage 1RM) for squats from week one to week five. There was no significant difference in the amount of weight lifted between week 13 and 26 for squats. Significant increases were only evident for chest press from week one to five. There were no evident increases from week five to 13 or week 13 to 26.

Discussion: It was hypothesised that BMD would be maintained in the PUMP group following six months of low-load very high-repetition training. This hypothesis was only partially supported by the significant reduction in lumbar spine BMD in the control group and the small non-significant improvement in PUMP. It should be noted that the small improvement of 0.01g/cm2 observed for BODYPUMPTM is less than the smallest detectable difference for the lumbar spine. Other low-load protocols have also typically failed to demonstrate substantial positive changes in lumbar spine BMD in similar-aged cohorts. To our knowledge, only one study has reported positive changes in lumbar spine BMD following a low-load resistance training program. In that study, participants aged 55-74 years trained for 40 weeks at either 40 per cent (3×16 reps) or 80 per cent (3×8 reps) 1RM and all groups achieved similar gains in lumbar spine BMD, although gains tended to be higher for men than women. It should be noted that the majority of women in that study were on hormone replacement therapy (HRT), and although a subgroup analysis was performed to compare HRT and non-HRT participants, there was no control group for direct comparison.

There were no evident training effects at any hip site in this study, which is in contrast to many previous resistance training studies in post-menopausal women. The results of previous low-load resistance training are disparate, as one study reported no improvement in BMD at the hip after six months of training, while another reported improvements at the total hip and trochanter but no change at the femoral neck. The conflicting results of these two studies are likely related to the large difference in training volume as participants completed just one set of 13 repetitions at 50 per cent 1RM compared to three sets of 16 repetitions at 40 per cent 1RM. The lack of improvement or maintenance in BMD observed at the hip and total body in this study are likely due to a number of factors, including high baseline BMD levels, the lack of progressive overload in the program, the activity levels of the control group, the exercises used in the program and low calcium intake of participants. The hip BMD values in this cohort at baseline were generally higher than age-matched reference values which suggests the current training protocol was not enough to generate further improvement in those with normal BMD. There was also minimal progression in the weight lifted during the BODYPUMPTM intervention, particularly in the second half of the program. The lack of progression was largely due to reported apprehension and fear of injury associated with lifting heavier weights. This overall lack of progression would have reduced the potential for osteogenic outcomes as strain thresholds would not have been repeatedly exceeded.

The relatively low levels of calcium intake in this cohort may have also influenced BMD. Although caution is warranted when determining calcium intake from three-day food records, the mean calcium intake was below 1000mg for the majority of participants and it is recommended that adults over 51 years intake 1000-1200mg of calcium per day. Furthermore, a significant reduction in calcium intake occurred between baseline and follow-up, which could have limited positive changes in BMD.

Our hypothesis that fat-free soft tissue mass would increase in the BODYPUMPTM group was not supported by the results. It appears that training with loads less than 30 per cent 1RM twice per week does not promote improvements in fat-free mass. The overall training volume may have been too low to promote changes and although hypertrophic changes have been seen following low load resistance training, to our knowledge there have been no reports of improvements in total body fat-free mass in older adults following low load training.

1RM max strength increased in the PUMP group for both leg-press and Smith machine bench press. There was an 11 per cent improvement for leg press and 14 per cent for bench press. These gains are modest, particularly for leg press when compared to previous low-load resistance training programs of similar durations. The modest gains are largely due to the lack of load progression over the course of the program and potentially due to participants not training to voluntary muscle failure, which is imperative when training with light loads.

Conclusion: This study provides the first evidence that low-load resistance training performed with a very high number of repetitions can limit reductions in lumbar spine BMD in active post-menopausal women. This form of training does not have evident impacts on hip BMD or fat mass and fat-free soft tissue mass. These findings suggest that resistance training of varying loads can limit bone mineral density declines if the training volume is adequate in untrained middle-aged and older women. Undertaking low-load high-repetition resistance training in this manner may be more attractive to older adults who are fearful of training with heavy loads or those that prefer a group training environment. However, due to the relatively complex lifting movements involved with BODYPUMPTM and the reported pain/injuries associated with training it is unlikely to be suitable for a number of individuals. Further work should assess the effectiveness of such training over a longer period of time with a greater emphasis on individualised progressive overload and more specific loading of the hip and lumbar spine.

This research was supported by PhD funding provided by Australian Fitness Network.

Fitness Research is a partnership between Australian Fitness Network, the University of the Sunshine Coast and the Australian Institute of Fitness. Its mission is to improve the health of Australians through an improved body of fitness knowledge. Access current and back issues of the Journal of Fitness Research at fitnessresearch.com.au/journal