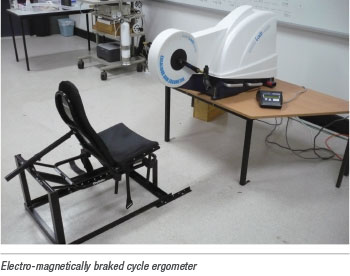 Introduction: One of the most commonly used methods of measuring anaerobic performance is the 30-s Wingate anaerobic test (WAnT), so-called because it was developed at the Wingate Academy in the 1970s. Most commonly performed on an ergometer, the WAnT has been shown to be a valid and reliable tool for the assessment of anaerobic power and functional performance of elite athletes and clinical populations. While a number of studies have characterised the contribution of the different energy systems during the WAnT for the lower body, little data exists on the contribution of the energy systems during an upper body WAnT.

There are significant differences in neuromuscular and cardiovascular function between the upper and lower body at rest and during exercise. The upper body is reported to have a higher percentage of type II fibres and extract less oxygen during exercise compared to the lower body. Significant differences in peak and mean power have also been reported between the upper and lower body, even when normalised for active muscle mass. Therefore the contribution of the energy systems to Wingate performance during arm cranking may be different to the lower body during a cycle WAnT.

Methods: Fourteen physically active men volunteered to participate in the study. Each participant reported to the laboratory for 30 minutes on three separate occasions. On the initial visit participants underwent body composition analysis. Then on two separate visits in a random order participants completed an upper and lower body WAnT. The upper body WAnT was conducted on a modified electro-magnetically braked cycle ergometer (EE) (Lode Excalibur Sport). The EE was fixed to a table, which in turn was fixed to the ground to prevent any movement in the EE during the WAnT (see photo). The lower body WAnT was conducted on a standard electronically braked cycle ergometer (Velotron, Racermate). Five minutes before, during and for 20 minutes after the WAnT, oxygen uptake (VO2) was measured continuously using open circuit spirometry. Blood lactate concentration was determined from capillary blood samples drawn from the finger at rest, immediately after and every second minute up to the 20th minute post-WAnT. The total energy cost of the WAnT was calculated and then divided into aerobic, anaerobic lactic, and alactic fractions. Body composition was assessed using dual-energy X-ray absorptiometry (DXA).

Results: Key results for the energy contribution in the upper body are shown in Figure 1, and in the lower body in Figure 2.

Differences between the upper and lower body energy contribution during the WAnT may be due to a number of factors. The constant day-to-day use of the lower limbs for mobility may increase their oxidative capacity more than the upper body, with the arms also found to have a reduced ability to extract oxygen during exercise. Furthermore, the upper body has been shown to have a greater amount of type II fibres compared to the lower body, and as a result a greater reliance on anaerobic lactic energy during high intensity exercise. Similar values in anaerobic alactic energy contribution between the upper and lower body in the present study and other studies indicate an equal reliance on phosphocreatine (PCr). This may be due to PCr stores being almost depleted in the first 10 seconds of a WAnT, with the remainder of the energy coming from the aerobic and anaerobic lactic systems.

The present study also found that the muscle mass of the arms was the main contributor to Wingate performance, whereas overall body mass was the main contributor to lower body Wingate performance. This indicates that the upper body is more reliant on the arms-only during the Wingate, compared to the overall body mass contribution to the lower body Wingate. This may be due to the setup of the respective upper and lower body ergometers and/or the differences found in the energy contribution between the upper and lower body.

Fitness Research is a partnership between Australian Fitness Network, the University of the Sunshine Coast and the Australian Institute of Fitness. Its mission is to improve the health of Australians through an improved body of fitness knowledge. Access current and back issues of the Journal of Fitness Research at fitnessresearch.com.au/journal