Negative feedback can impact an instructor’s mental health, which is why it needs to be handled with care, writes Mel Morony. 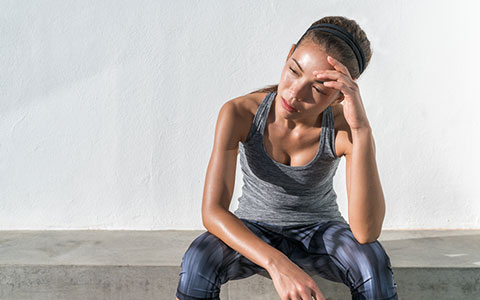 Blazing lights, blaring music, motivated group fitness participants: by all appearances, the Group Fitness Instructor (GFI) is having a ball with their class. However, it is possible to wear a pasted smile, teach a class on auto-instruct and not give a hint as to what is going on emotionally or mentally.

We pay a lot of attention to physical occupational health and safety (OH&S) and the hazards that pose potential risks to GFIs. For instance, we use a microphone to protect the voice, have appropriate flooring to protect the knees from repetitive high impact programs, and educate instructors on their role in an evacuation. Physical OH&S is important, but what about mental OH&S – specifically, how negative member feedback and complaints can impact an instructor’s mental health?

Managing negative feedback about yourself

In any vocation that involves interaction with customers, there will always be someone who doesn’t like or agree with somethingthat we or our employing company does. It’s an unavoidable hazard.  How we manage that hazard, however, can have a very big impact on how much of a risk it may pose to someone.

My philosophy with negative feedback is ‘better out than in’. I would rather be informed if someone doesn’t like something about my class or my delivery style than have them bottle it up or stop attending the class. If I’m aware of feedback then I can take steps to either ‘fix’ the issue or explain why I do what I do.

When I feel that I have not been able to resolve an issue (in the case of verbal feedback) or if it’s a complaint about centre policy that I’m dealing with, then I make a point of discussing it with either my manager (in person, if they’re available, or by email), a duty manager or an appropriate member of staff whom I trust. This does two things: firstly, if the member contacts my manager regarding the issue then my side of the story has already been told; secondly, it means that I have had a chance to debrief. Going home with a member’s unresolved negative feedback replaying in my head could cost me a good night’s sleep. Thus, talking about it to an appropriate person is my way of managing that.

Managing feedback about your colleagues

There has been the odd occasion when I have received verbal feedback from a member regarding a fellow instructor. Where it’s positive, I’m happy to relay it to that instructor (usually via email) with a CC to the co-ordinator to let them know what has been said. It’s not common for GFI’s to receive positive feedback, so it’s important to relay it to the person being complimented.

However, where feedback is negative in nature, I make a point of not discussing it with anyone else. Instead, I email the Group Fitness Manager (GFM) of the club to relay the feedback and leave it with them to deal with as they deem appropriate. It’s not my place to make a colleague feel awkward by addressing it directly with them, and I don’t want to put a strain on my working relationship with them.

It’s not what you say…

Complaints will often be submitted through a centre’s written feedback forums. These will usually go to the GFM. We cannot control the hazard. What we can control is how it is relayed to the instructor, and the risk that might be posed to their mental health.

So, should the feedback be discussed with the GFI privately by phone or in person (email is generally considered rude) – or would it be better to address the complaint with all team members in a GFI meeting or group email/private social media page (without making it clear who the complaint was specifically aimed at)?

This will probably depend on the nature and specificity of the complaint, and should be left to the discretion of the GFM. For example, a complaint about a specific GFI’s instructing style would be too obviously aimed at an individual to be shared publicly, whereas feedback about music volume or classes starting late may be considered generic enough to be applicable to multiple instructors, and therefore not single any individual out. A danger of this latter approach, however, could be that it is so ambiguous that the GFI about whom the complaint was made does not realise that it’s about them – while other instructors could seek to fix issues that aren’t ‘broken’.

Regardless of how the complaint is addressed, the tone used should never be brusque or accusatory, and respect should be shown to the GFI in question.

Apart from what is illegal as far as discrimination and bullying is concerned, there is no specific legislation for how employers treat their workers as far as mental health OHS is concerned – in other words, there is no legal definition of courtesy and respect. However, the Australian Human Rights Commission states that: “As an employer, you have legal obligations in relation to the management of mental illness in the workplace…, OHS legislation requires you to ensure your workplace is safe and healthy for all workers and does not cause ill health or aggravate existing conditions.”

Yelling at or humiliating an employee – either privately or publicly – may not, therefore, be explicitly illegal. It would, however, be poor practice and if an existing mental health condition in a worker was aggravated as a result of the way in which they received negative feedback, it could raise the legal question of whether the employer was failing to provide a safe and healthy workplace.

From a staff retention viewpoint, it only makes sense for GFM’s to deal with complaints with diplomacy and understanding. Delivering negative feedback in such a way that it causes instructors to give up teaching their classes, and advise their industry colleagues to avoid working for your club, could damage your business.

The Australian Human Rights Commission states: “All employers and managers are obliged to take appropriate steps to eliminate and minimise health and safety risks in the workplace.” Severe penalties, including jail time, exist for employers who breach the anti-discrimination act and anti-bullying laws. Employees/ workers also have the right to contact Fair Work Australia, Safe Work Australia, The Australian Human Rights commission or Beyond Blue with their questions and concerns.

There’s no question that when members and participants make a complaint about an instructor, it needs to be relayed to them, but care should be taken in the way in which it is delivered. Often the risk to mental health is not so much in what is said, but how it is said.

Mel Morony is a group exercise instructor. Her interest in instructor mental health stems from attending workshops required by her employers. </p