How Pilates can help your clients rehab from injury

If you’ve never considered the role Pilates can play in rehabilitating clients with injuries, think again.

To the uninitiated, Pilates can sometimes be dismissed as a gentle mind body workout that takes place behind closed doors. Something a bit like yoga, perhaps. The fact is, however, that this method of conditioning was born out of a need to achieve functional strength necessitated by a weakened physical state.

Origins of Pilates-based work in rehabilitation

As a child, German-born Joseph Pilates suffered from a multitude of illnesses that resulted in muscular atrophy and weakness. This inspired him to become physically stronger and, ultimately, dedicate his life to the pursuit of functional strength. His pursuit of physical and mental strength led him to study yoga, martial arts, Zen Meditation, and Greek and Roman exercises. He worked with medical professionals, physicians and his wife Clara, who was a nurse. It was the integration of these various modalities that led Pilates to develop his own unique method of physical and mental conditioning, then termed ‘Contrology’.

Introducing his method of whole-body conditioning to the US in 1923, over the next couple of decades Pilates saw it embraced by popular dance instructors and choreographers, including Martha Graham, George Balanchine and Jerome Robbins.

As elite performers, dancers often suffered injuries that demanded long recovery periods. Unique at the time, Pilates’ method encouraged movement early in the rehabilitation process. He found that by introducing movement without impact early in the rehab process, the pace of healing increased and time off training decreased.

It wasn’t long before the wider dance community caught on and adopted Pilates’ methods for both conditioning and rehabilitation. Seventy years later, his techniques began to permeate and gain popularity in rehab circles. By the 1990’s, an ever-increasing number of rehabilitation practitioners were using the Pilates Method in multiple ﬁelds of rehabilitation, including general orthopaedic, geriatric, chronic pain, neurologic rehabilitation, and more. Within the rehabilitation setting, most Pilates exercises are performed on several types of apparatus, the best known of these being the spring-based Reformer.

The apparatus work evolved from Pilates’ original mat work (which was difficult due to the effects of gravity on the body). On the apparatus, springs reduce the effects of gravity and help control movements, which aid a safe recovery. By altering the tension on the springs or gradually increasing gravitational forces, someone recovering from injury can be progressed towards full functional movement.

Today, more and more healthcare practitioners are using the Pilates-based approach in rehabilitation.

Core control is the most common desired outcome for functional movement. Research led by Richardson and Hodges in 1990’s Australia looked at the importance of trunk control. Their research focused on defining the activity of core musculature among healthy adults experiencing chronic low back pain during upper extremity movement. The results support the importance of core stiffening in preparation for movement of the extremities: core stiffening is not thought to restrict movement, rather to facilitate controlled movement. This phenomenon is at the root of all Pilates-based work.

Joseph Pilates believed that core control is the essence of controlling human movement. Richardson and Hodges also identiﬁed the transversus abdominus muscle as being a primary postural control muscle. It is hypothesised that the transversus abdominus is activated to provide core stability during dynamic movement. This approach to core control supports the theory of movement advocated by Pilates-evolved practitioners, more so than traditional methods.

The Pilates-based environment is great for designing task-oriented interventions. Within this environment, a faulty movement can be broken down into components by using the spring-based apparatus, and changing the body’s orientation to gravity. When you evaluate a client’s needs and the desired movement outcome (e.g. jumping, sitting, reaching, rotating, or walking) you can design a similar movement with the appropriate level of load to support it while it heals.

Working to overcome faulty compensatory movement patterns is a fundamental goal in the Pilates-evolved method.

The goal of achieving efficient movement and returning to functional movement and enhanced performance is the foundation of Pilates-evolved work. Pilates-evolved exercises can facilitate such movement behaviour by allowing your client to be in a position that minimises unwanted muscle activity, often responsible for inefficient movement patterns and early fatigue, which can lead to injury. 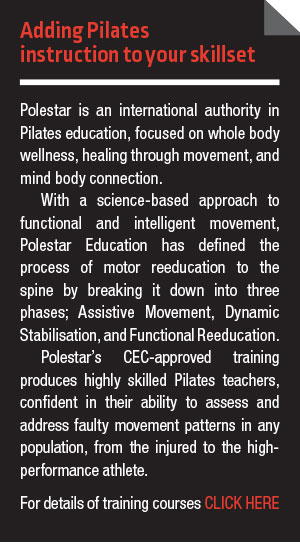 When a desired movement is challenged by a decrease in proprioception, individuals often over-recruit muscles in an attempt to stabilise. Although it has not been proved, it remains plausible that over-stabilisation or faulty stabilisation inhibits efficiency and acts as a hindrance to efficient movement.

For example, your client may be able to demonstrate a 90-degree straight leg passively, but when asked to lay on his or her side, with a decreased base of support, the available range of motion on the hip drastically decreases. When you challenge the base of support, and therefore balance, the degree of efficiency and range of a movement often suffer.

The Pilates environment allows you to decrease the proprioceptive challenge by increasing the base of support and providing adequate assistance and feedback for optimal motor learning. You can progress the movement sequence by decreasing the amount of support, ensuring that the quality of the movement does not suffer. You could continue the progression toward a more functional task and familiar orientation with gravity. Additional motor learning theory would teach that a cognitive level of learning take place ﬁrst with internal and external feedback. Once association takes place and your client continues the practice, the new movement sequence may become automatic. It is this automatic execution of new movements that reduces the risk of re-injury and increases efficiency.

Another important factor for attaining automatic functional movement is neurologic feedback from the deep muscles of the trunk, or the multiﬁdus. The multiﬁdi muscles have six times more muscle spindles than any other muscle in the trunk. This great source of kinetic feedback plays a large role in trunk awareness (Richardson et al).

Theoretically, if the multiﬁdi and other deep paraspinal muscles are inhibited secondary to pain and pain inhibition, we can hypothesise that the same process would inhibit the proprioceptive feedback mechanism of that muscle (i.e. muscle spindle ﬁbre). The loss of proprioceptive feedback leads to a decrease in trunk awareness and control. Inhibition of core proprioception may be responsible for faulty compensatory patterns that can result in destructive forces that prolong the healing process. Working to overcome faulty compensatory movement patterns is a fundamental goal in the Pilates-evolved method.

When your client has shown successful movement without pain, you can progress the exercise by decreasing the assistance and challenging the base of support. The ability to challenge proprioception through a movement phase in the Pilates-evolved environment is endless. The three variables; base of support, length of levers, and degree of assistance, can be manipulated independent of each other.