Why would you choose to restrict blood flow and lift lighter weights when training – and how does it relate to rehabilitation from injury? Tony Boutagy investigates.

Several years ago I was being given a guided tour through the sports science and training facility of a top international Olympic training centre. After seeing the muscle testing labs and heat chambers, we made our way down to the bottom floor, where the gym was located. We passed a sprinter doing multiple box jumps and a weightlifter performing front squats before arriving at a woman lifting what appeared to be a light load (by Olympic standards) on a trap bar deadlift. I was wondering why she had not just one but three spotters. I didn’t need to wait long. After the last repetition she just stood there holding the bar, clearly in discomfort and then her legs started to shake uncontrollably. Within seconds, she sat down ‘forcefully’ and two of the spotters removed occlusion straps that were wrapped around her upper thighs. The other spotter was there to ensure she didn’t fall over!

This was my introduction to blood flow restriction (BFR) training, used in a range of settings, from athletic conditioning and muscle building to rehabilitation. But where did the idea of tying a strap around a limb to reduce blood flow to an exercising muscle originate? 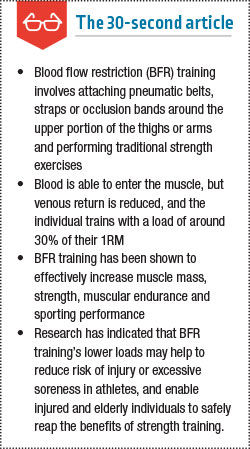 As a training concept, blood flow restriction can be traced to 1966 Japan, when 18-year-old Yoshiaki Sato noticed that the numbness in his legs caused by sitting in an awkward posture during a prolonged Buddhist ceremony was not dissimilar to the sensation he experienced when he lifted weights. This muscular ache, he realised, was due to the occlusion of blood circulation.

Over the next several years, Sato experimented on himself using bicycle tubes, ropes and straps, and developed the system from which blood flow restriction training would evolve, which he termed ‘Kaatsu’ (Ka meaning ‘additional’ and atsu meaning ‘pressure’). Sato’s idea was to apply pressure around the top of the arms or legs while lifting a light load, in order to impede the flow of blood to exercising muscles.

In some early studies of this type of training, when pressures as high as >180mmHg were applied in order to completely occlude blood flow, researchers referred to it as ‘vascular occlusion training’. The move towards maintaining arterial inflow while occluding venous return, however, makes the term blood flow ‘restriction’ more appropriate.

What is it and how does it work?

BFR training involves attaching pneumatic belts, straps or occlusion bands around the upper portion of the thighs or arms and performing traditional strength exercises. The pressure is set in such a way that blood is able to enter the muscle, but venous return is reduced. As such, the selected training load is often around 30% of the individual’s 1RM.

Despite several decades of research investigating BFR, the precise explanation for it’s effectiveness in improving strength and muscle mass is not fully known. The prevailing theory is that the reduction of venous flow causes blood to pool in the limbs, resulting in increased and sustained metabolic acidosis. Receptors in the muscles send stronger signals to the brain and large quantities of human growth hormone are produced1, fast-twitch muscles are recruited2 and muscle growth pathways are activated3.

Safety concerns with BFR training appear to be few. In a study that surveyed 12,642 individuals who had undergone BFR training, including both the young (<20 years old) and the elderly (>80 years old), athletic and healthy population groups and those with various kinds of physical conditions, such as cerebrovascular diseases, orthopaedic diseases, obesity, cardiac diseases, neuromuscular diseases, diabetes, hypertension and respiratory diseases, BFR training resulted in a very small number of complications. The incidence of side effects was as follows: venous thrombus (blood clot in a vein), 0.055%; pulmonary embolism (blood clot in artery of the lung), 0.008%; and rhabdomyolysis (breakdown of muscle tissue), 0.008%. These results indicate that BFR training is a safe and promising method for training athletes and healthy people, and can also be applied to those with various physical conditions4.

So we know what BFR training is and what it does, but why would you choose it over regular training methods? That is, why not just lift what you can lift?

Australian blood flow restriction expert Dr Brendan Scott has suggested one of the key benefits of BFR training in the athletic conditioning setting is in the reduction of high training loads that may result in injury over time or excessive soreness, which has a negative impact on the quality of the training week. ‘Implementing BFR during various phases of an athlete’s periodised training plan could help counter the potential negative effects of high mechanical training loads. Indeed, while BFR training seems to provide a physiological stimulus for muscular adaptations, the low loads used do not cause measurable muscle damage5. This low-load/recovery concept becomes more attractive to ageing athletes and those who have a reduced ability to recuperate between training sessions.

BFR training has repeatedly been shown to be an effective method for increasing muscle mass6, strength7, muscular endurance8 and sporting performance9 in both males and females10. Research has not demonstrated a superior training effect of BFR when compared to traditional, high-load resistance training, therefore the key benefit is that a comparable11 training response can be achieved with considerably lower loads, which has the potential to minimise load-induced injuries and reduce recovery duration between training sessions. It is also useful when the trainee does not feel sufficiently motivated to perform a high-load strength training session (that is, they are mentally fatigued and just ‘not feeling up to it’).

The most impressive application of BFR training is in rehabilitation after injury, surgery, disuse and muscle wasting conditions, such as paralysis injuries, cancer cachexia and sarcopenia, and for astronauts12. Muscle wasting is an inevitable consequence post-surgery or during recovery after an injury where a limb or muscle requires rest or immobilisation in order to reduce pain. Research has demonstrated that BFR is a highly effective training method to preserve or even build muscle mass in these conditions13, which is especially important when high-load training protocols might not be indicated due to potential aggravation to the surgery site, compromised joints or weakened connective tissue. A similar argument can be made for the effective application of BFR in the ageing population, where high loading may not be appropriate. BFR training has been shown to promote similar gains in strength and muscle mass compared to high-load training in the elderly14.

World BFR expert professor Jeremy Loennecke has proposed a four sequential phase rehabilitation protocol for those recovering from injury15: 1) BFR alone during periods of bed rest or immobilisation; 2) BFR during low-work rate walking; 3) BFR during low-load resistance exercise and; 4) low-load BFR training combined with normal high-load training. Progression through these different phases should follow a continuum, with gradually increasing exercise intensities within each stage, to limit risk of further injury resulting from a return to training too early16. 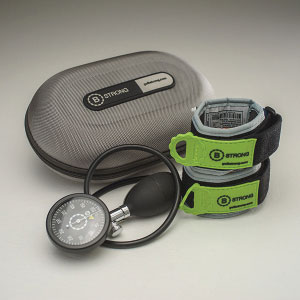 The most common protocol is to inflate the cuff around the upper thighs or upper arms and perform 30 repetitions of a movement, rest for 30 seconds, perform 15 reps, rest a further 30 seconds and perform a final set of 10 to 15 reps. The cuff would stay on for the entire three-set duration and only be removed after the final set has been completed. The 30/15/15 and 30/20/10 repetition schemes are the most commonly used BFR training methods, using approximately 30% or less of the individual’s 1RM.

BFR devices can be purchased from Go B Strong and Kaatsu Training.

The author has no affiliation with any BFR products. Images courtesy of gobstrong.com

Tony Boutagy, PhD, AEP, ESSAM is a strength coach, exercise physiologist and the director of the Boutagy Fitness Institute in Sydney, where he both trains clients and delivers courses and mentoring programs for personal trainers. tonyboutagy.com