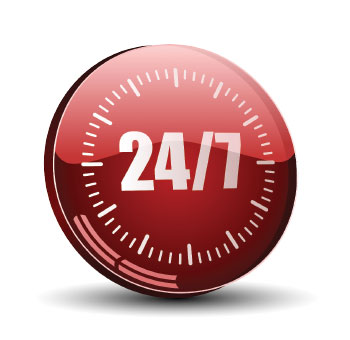 An independent club owner reveals how she overcame her trepidation and transformed her facility into a 24-hour operation – and why she hasn’t looked back.

If you had asked me 12 months ago if I would turn my club into a 24/7 operation I would have replied with an outright ‘no’. The thought of people being in a building that my husband and I had put so much work into with nobody overseeing them wasn’t even a thought. Why would I want to risk it, wondering if somebody was going to drop a weight on their head, lock themself in the shower, or even suffer a heart attack with nobody there to assist? Plus, of course, the prospect of equipment growing legs and walking out the door…

However, during my annual trip to FILEX last year I caught up with a well-known independent club owner at the Business Summit. The topic of 24/7 opening hours arose and he said to me: ‘I’m like you Mel – I like the old way, but it’s the best thing I’ve ever done.’ That statement prompted me to re-evaluate my fears, and I soon came to the realisation that most of my concerns could eventuate regardless of whether we opened all hours or not.

After confirming that we were permitted by the council to potentially open 24/7, the next step was to test whether there was a demand for all hours fitness, so we conducted a quick survey via text message to 1,000 members asking whether they would use the club out of hours. The result was definitive: 78 per cent of responders replied yes and 22 per cent said no. So the decision was made: our club was going 24/7.

We then announced on Facebook that we were going 24/7 along with an expected date. It was around this time that I filled my husband in on what I was planning…! His response: ‘So you want to get the club renovated to 24/7 specs in the next six weeks and launch two days before we go on holiday to Thailand?’ Yes, I did. So, off we went.

The first security company recommended to us told us they would be there with bells on, but proceeded to muck us around for three weeks before telling us that they couldn’t deliver. Fortunately the next company we liaised with proved more reliable and also quoted us a figure close to what we had in mind, so that was one item ticked off the to-do list. 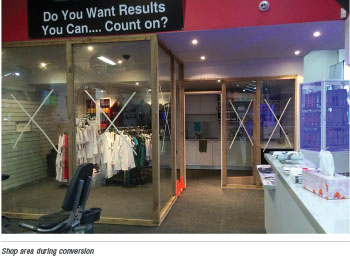 The next stage was going to be the real challenge (and expense): the conversion. Oops, there goes the backyard renovation again (this club keeps getting in the way of my backyard makeover – four years I’ve been waiting!)

Surprisingly, you can convert a club in only two weeks. The open-plan nature of our facility meant that we needed to enclose a few areas, but this challenge actually presented a great opportunity. The club had an open lounge and kitchen area which we converted into a supplement shop and small retail clothing area. Naturally, we wanted to keep costs down so, after being outraged by some of the quotes we received, we tracked down some second-hand glass and built the frames and door ourselves. The result was a large supplement shop area which has increased secondary income and functions as an incentive program for our trainers. We still also use the area for coffee and breakfast. This section is alarmed and locked at night.

Next up was the reception area, which also needed to be glassed in. Again, we did the majority of the work ourselves by installing sliding glass windows and doors and fitting locks and an alarm system. Fridges had to have locks installed, procedures had to be implemented regarding opening and closing the club and staff trained in how to follow these procedures. The facility is around 1,600square metres, so it’s a large club to run 24/7. It is currently manned from 5am to 8pm weekdays and in the morning at weekends. 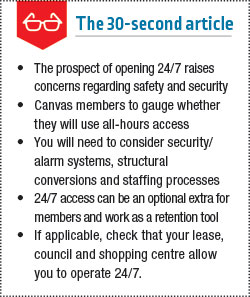 We decided to go 24/7 in April and announced we would open in June – and that’s what we did.

In May we started marketing ‘24/7 VIP Memberships’, with members invited to put a non-refundable deposit down on their fobs and to pay the balance on collection. Surprisingly, some members selected to pay for them in full. Our objective was to have 500 members on 24/7 within six months: we got to 400 memberships in September, with half of these being sold before we converted. Part of this was attributable to a member drive promotion that we contracted CFM to run on our behalf. This enabled us to reach a far greater chunk of the untapped local market than we would have been able to do with our limited staff and resources. We also used the conversion as an opportunity to create a new logo and fresh look for our club.

The pro’s, the cons and the challenges of going 24/7

The main advantage is that it’s a great retention tool. It’s important to look after your existing members rather than focus all your resources on seeking out new ones. A negative is that you may find yourself worrying about what can go wrong when you’re not there, but we have found that a great camera system and emergency buttons ease this concern.

As for the challenges, well that’s easy – watching members sneak friends into the club! We’ve caught a few and even had one member’s girlfriend do a little dance for the camera. We also walked in on a member and his three kids one Saturday night!

Going 24/7 hasn’t depersonalised our service, it’s just added more choice for members. Rather than charging extra for 24/7 memberships, we charge for the actual fob. All 24/7 members get full access to the club, including Wexer Virtual Cycle Classes, and they also get a 10 per cent discount on supplements. The aim is to give them additional reasons to be a 24/7 member, aside from the fact that they have access to the gym whenever they want it.

So, did I go to Thailand two days after opening? No, I had to reschedule our holiday. Is the back yard finished yet? No, but hopefully it will be underway by the time you read this!

If you’re an independent club operator and thinking of going 24/7… well it’s your choice, but personally, I have no regrets.

Mel Tempest is the owner of Body & Soul health club in Ballarat, VIC. She is also a group fitness consultant who works with fitness facilities looking to increase their group fitness revenue. meltempest.net