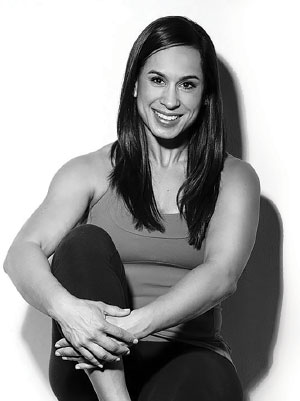 I recently took one of my training clients to The Fitness Show. She has no experience of the ‘fitness world’ other than her one-on-one coaching sessions with me and what she’s seen online. As we were making our way through the buff bodies, crop tops and seemingly endless supplement displays she made a profound observation: ‘fitness isn’t the same as health is it?’

It was less of a question, and more of a realisation – one with which I had to agree. My client is a beautiful young woman who has been overweight her entire life. As an adolescent she was a full time ‘dieter’ with very low self-esteem.

When I first met her, she was anti-personal trainers because she felt that they would never be able to empathise with her and would judge her for her appearance (and the sad truth is, this belief stemmed from a negative experience with a previous trainer who had judged her).

My client was stuck in an unhealthy way of thinking and being, and more often than not used unhealthy methods to try and get the results she was after. Not surprisingly, it never worked. Now, after adopting a healthy approach to eating and training, I’m proud to say that she has lost over 40kg and counting. A great physical transformation that has come about due to her even greater mental transformation. Her goal has shifted from being purely about her looks, to now encompassing feelings of being strong, empowered and making her health her primary focus. Of course, there are thousands of examples of clients who have made similarly amazing transformations from the inside out. But there are countless more whose experiences of ‘fitness’ have not been as positive.

Which brings me back to her realisation that fitness isn’t the same as health. I believe there is a dark side of ‘fitness’ that is causing more harm than good – a side that relies on extremism and elitism and focuses purely on superficial outcomes. We see it in the explosion of sports model and bikini competitions, in areas of the supplement industry, and in ‘fitspirational’ memes on social media.

We also see it in the alarming fitness trend of ‘extreme’ workouts and events. The need to ‘beat the body into submission’ in order to feel good or experience satisfaction is an act of extremism that takes someone further away from health.

We receive a constant barrage of messages from the media telling us that our bodies are imperfect and that in order for anyone to be, or feel, sexy and confident we must be super lean and ripped to shreds (Victoria’s Secret ‘Perfect Body’ campaign, anyone?). Men are expected to be ‘stacked with lean muscle, huge chests and ripped abs’ and women are expected to be ‘lean with a big butt, tiny waist and a flat stomach’.

For a very small percentage of the population this is achievable, but for most this expectation is unrealistic, and requires extreme measures to achieve. Extreme measures such as excessive dieting, over-exercising, use of supplements (natural and non-natural), restrictive and controlled eating habits, and obsessive behaviours. All of which punish the body, and none of which fall under the World Health Organisations’ definition of health: ‘A complete state of physical, mental and social wellbeing, and not merely the absence of disease or infirmity.’

If people choose to enter the part of the fitness world that is based purely on aesthetics, then that is their prerogative; however, it is up to personal trainers to advise them on the consequences of their choice (particularly with regards their mental and social wellbeing).

The once blurred lines between health and fitness have become a gaping chasm. As a consequence, personal trainers now have significantly more responsibility and influence. I believe we must expand our skillsets to match this shift in responsibility.

So, with this in mind, what kind of trainer are you? The kind that focuses purely on aesthetics and ‘fitness’ at the expense of health, or the kind that engages in healthy outcomes that truly transform lives for the better?

Nardia was named Australian Fitness Network’s Personal Trainer of the Year 2014. An integrative training expert, she has over 15 years’ experience in personal training, coaching and educating fitness leaders. nardianorman.com