How do strength and endurance gains achieved with traditional weight training compare to those obtained when clients work against manual resistance provided by a PT?

Title: Manual Resistance Versus Conventional Resistance Training: Impact on Strength and Muscular Endurance in Recreationally Trained Men
Authors: Dr’s Chulvi-Medrano and colleagues (Benestar Wellness Center, Spain)
Source: Journal of Sports Science and Medicine (2017).  16: 343-349. Available to read free HERE.
Introduction: When it comes to strength and conditioning training, whether it’s for athletes or individuals with chronic diseases/conditions, we always look for empirical evidence as to its benefits. This is called evidence-based practice and lends credibility to the exercise program you are prescribing. As researchers, we believe there is (some) responsibility to be cynical (or perhaps we just have a non-trusting nature!)
While I was driving past Manly beach the other morning looking at the waves for a surf, I saw a personal trainer leading a group of clients through an exercise program on the grassy area near the beach. I could see the trainer was using stations which included kettlebells, boxing pads and elastic resistance training bands. This reminded me of one of our students who had recently asked if there was any benefit to using manual therapy or resistance training bands in mature-aged patients (I believe the exact wording was old/somewhat frail), and I said that when patients are debilitated (i.e. poor muscular strength), providing a progressive resistance, either manually or via the resistance training bands, would improve the person’s strength and, ideally, muscular function. 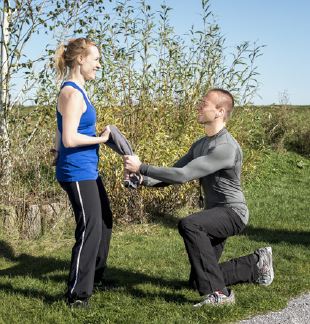 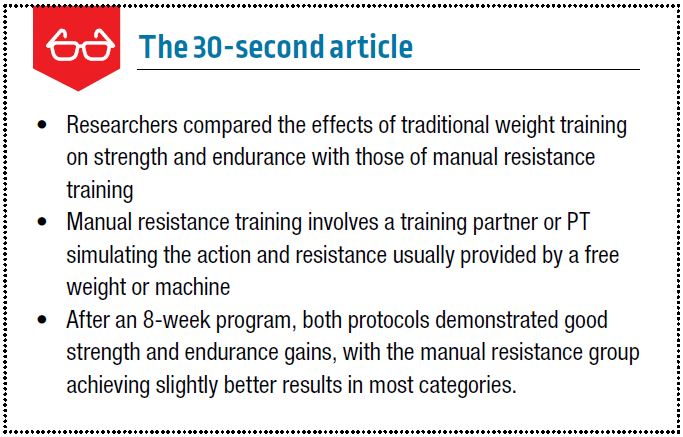 This leads us to the subject of this Research Review, in which Dr Chulvi-Medrano and his colleagues compared traditional weight training to manual resistance training. Manual resistance training effectively involves a training partner (spotter or PT) simulating the action and resistance usually provided by a free weight or machine. Previously, we have not investigated the effects of manual resistance training on maximal muscular strength and muscular endurance in the literature, however there are a number of studies showing its benefits in untrained or special populations and, in fact, the best example is with astronauts.

Astronauts need to train at least two hours a day as there is dramatic muscle and bone loss due to the low gravity environments on space stations. The effect is so similar to that of ageing that some insights into the process of growing older may be gained from studying astronauts in space. One study showed a 30% loss of bone mass due to exposure to microgravity for space station residents. This is similar to effects of osteoporosis that we witness down here on earth. It is believed that resistance training is more important than aerobic training for these astronauts in minimising loss of both muscle and bone. It is interesting to consider this article in terms of manually applied resistances.

Methods: Healthy, young and experienced (>1 year, recreationally trained) males were recruited to participate in this study. The subjects (n = 21) were randomly split into two groups, which trained twice per week over 8 weeks using either conventional resistance training or manual resistance.

Conventional resistance training: Following a standardised warm up (5 minutes of light jogging and dynamic stretching exercises) participants performed bench press and lat pull-downs for 3 sets of 8 repetitions at an intensity of 8 out of 10 perceived exertion scale (rated ‘hard’).

Conclusions: The authors concluded that they found manual resistance training was equally effective at improving muscular performance as free weights for trunk flexion, back extension, chest press and 1RM squat.

We alluded earlier in this article to the use of rubber resistance bands by astronauts, which is critical for prolonged spaceflights due to a lack of gravity (e.g. microgravity). Research by Behringer and his colleagues (2015) reported a significant loss in bone mineral density and muscle mass in astronauts on six-month excursions. With plans to send astronauts to Mars, which requires approximately 250 days just to reach the planet, it is crucial that researchers develop effective strategies to overcome the deleterious effects of prolonged space travel.

Behringer and his team developed a device that enabled the astronauts to train isometrically (squats, bent-over rows, pec flys, triceps extensions, calf raises and crunches) and they compared this to traditional resistance training over a six-week period. The authors reported significant gains in the 1RM squat (+27.6kg manual resistance vs 28.4kg free weights), thereby illustrating that isometric exercise is also beneficial in gaining strength.

Cons: Although this type of training has been shown to be beneficial for improving strength, it would require personal trainers to primarily utilise manual resistance training in one-on-one training sessions. It is important that the personal trainer exercises caution when applying controlled resistance, both with regards their own posture, and the safety of their, probably, less muscular client. In group training (e.g. partner resistance in a boot camp) it is important that all participants follow these caveats. It is also important to point out that when using isometric strength training, the strength gains are specific to the angle to which it is applied. This would require training four or five different angles on the squat exercise, for example. Also, motivation can be a limiting factor; as you cannot quantify the load (i.e. resistance) you must depend upon the participant to be especially motivated.