Use diet and lifestyle to live longer and better

The way you live today can help add not only quantity, but also quality, to your future. 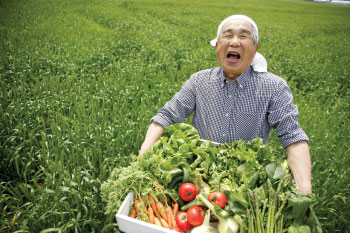 The capacity of the human life span is, on average, 90 years, and a small proportion of people have genes that help them to live longer. In Australia our current life expectancy is approximately 82.10 years; 80.1 years for males and 84.3 years for females1. So why aren’t we living longer? Is it luck? Or can we roll the dice in our favour?

Media and advertising tell us we can take anti-ageing pills, vitamins, hormones, or have surgical procedures to reverse or stop the ageing process. Unfortunately there is no evidence for these claims and the reality is there is no known way to stop or reverse ageing.

There is good news, however. There may be ways we can slow the ageing process to enable us to live to our full capacity. In fact scientific studies suggest that only about 25 per cent of how long we live is dictated by our genes. The other 75 per cent is determined by our diet and lifestyle. If we optimise our diet and lifestyle choices, therefore, we may gain back an extra 10 years of good quality life we may otherwise have missed out on.

Longevity scientists and demographers have uncovered locations where people are living longer disability-free lives than anywhere else in the world. These unique places have been called ‘blue zones’.

The phrase was first coined by Belgian demographer, Michel Poulain when referring to the Barbagia region of Sardinia. Journalist, explorer, and author of The Blue Zones, Dan Buettner, extended the term to include other demographically confirmed geographical areas where people live measurably longer lives. These are areas that have the highest centenarian rate (people living over 100), the highest life expectancy or the lowest rate of middle age mortality.

To date, Buettner and his research team (in conjunction with the National Institute of Ageing and National Geographic Expeditions Council), have reported on five blue zones: Okinawa in Japan, Barbagia in Sardinia, the Greek island Ikara, the Nicoya Peninsula in Costa Rica, and the Seventh-day Adventist community in Loma Linda, California. 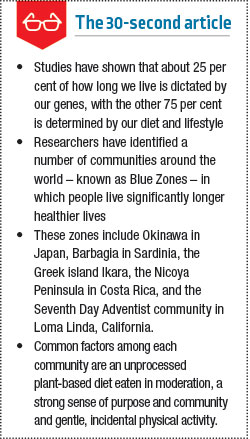 Buettner’s research started with Barbagia, where demographer Gianni Pes had first reported the presence of seven centenarians in one village of 2,500 people, which equates to one in 360 people reaching 100 years of age. To put this into perspective, approximately one in 5,750 people in Australia – that’s 16 times fewer – are centenarians. In addition, Barbagia is one of the only places in the world where men live as long as women.

So what’s the secret? – Barbagia, Sardinia

Partially it’s in their genes as Sardinians carry the M26 marker, linked to exceptional longevity, at much higher rates than other populations. However, while genes may explain some of their longevity, their lifestyle2   has been found to play an even bigger role.

The majority of Sardinian men in this region are shepherds, an occupation that involves several hours of low intensity physical activity per day. Their diet is lean and largely plant-based, consisting of unleavened whole wheat bread, beans, garden vegetables and fruit, with meat consumed no more than once a week. Sardinians eat pecorino cheese from grass-fed sheep, high in omega-3 fats, and in some parts of the island, mastic oil with its antibacterial and antimutagenic properties. They regularly drink goat’s milk that contains anti-inflammatory components and enjoy one or two glasses of Cannonau wine daily, which is rich in flavonoids. Flavonoids have significant anti-inflammatory activity and this local wine has two to three times more of them than other wines. The Sardinian lifestyle includes a positive attitude towards elders, close ties to friends and family, and plenty of time devoted to laughter. Evidence shows people who have strong social networks and enjoy a regular laugh experience lower rates of depression, suicide and stress. The people in blue zones live not only longer lives, but happier, healthier ones.

The longest healthiest years in the world – Okinawa, Japan

If you are going to live a long life you want to be able to enjoy those years and that’s exactly the case in Okinawa. Okinawans have the longest disability-free life expectancy and the oldest living female population in the world.

The majority of the Okinawan elders still live a traditional way of life – they eat a plant-based diet, engage in regular low intensity physical activity (gardening and walking), spend a lot of time with friends and family, and maintain a strong sense of meaning in life.

Almost all Okinawan centenarians3 grow a garden and harvest vegetables, herbs and spices with antioxidant, anti-inflammatory, anti-microbial properties such as mugwort, ginger and turmeric.

Their modest plant-based diet includes foods rich in soy, like tofu and miso soup. Flavonoids in tofu have cardio-protective properties and fermented soy foods contribute to a healthy intestinal microbiome (good bacteria in your gut).

Okinawans are also one of the only human populations that purposefully restrict their energy intake by keeping to a principle of ‘Hara hachi bu’ – eat until you are 80 per cent full.

The average Seventh-day Adventist lives four to ten years longer than the average Californian. Loma Linda University Medical Center has been studying the Adventists for approximately 50 years, and the evidence is that diet and lifestyle play significant roles in their exceptional longevity. Loma Lima is home to 9,000 Seventh-day Adventists, who practice a healthy diet and lifestyle as part of their faith.

The Adventists that live the longest and have a significantly reduced risk of lifestyle diseases eat a light, early dinner and follow a vegetarian diet with two or more servings of fruit per day, legumes three times a week, and nuts at least five times a week.

The Adventist health study research also suggests that drinking at least five or six glasses of water a day could reduce the risk of fatal heart attack in men by 60 to 70 per cent.

Costa Ricans have the lowest rates of middle-age mortality in the world and the second-highest convergence of males aged 100 or above. Out of the total population in Costa Rica, the majority of centenarians are located in the Nicoya Peninsula. In Nicoya, people not only live a longer life, but die of cancer at a rate 23 per cent lower than the rest of the country.

Similarly to other blue zones, Nicoyans are family and faith-oriented, with strong social networks. They have a ‘plan de vida’ (reason to live) driving their positive outlook and active lifestyle. Nicoyans eat a plant-based diet, comprising corn, rice, garden vegetables and vitamin C-rich fruit. They supplement this with eggs and a small amount of pork. Most of their food is consumed in the day, with only a light meal in the evening.

A unique attribute of this blue zone is the calcium- and magnesium-rich water. The consumption of hard water may be a protective factor against heart disease and bone fractures4.

In Ikaria, Greece, people live on average 10 years longer than those in the rest of Europe and America – around one in three Ikarians lives into their 90s. This population is almost entirely free of dementia and chronic disease.

Similarly to other Blue Zones, Ikarians walk and garden throughout the day, place high value on fostering social connections with family and friends, avoid smoking and make time for rest. They eat a Mediterranean-style diet with lots of fruit and vegetables, whole grains, beans, potatoes, olive oil and moderate amounts of wine. In addition, they drink goat’s milk and herbal teas – oregano, rosemary, sage and thyme – with anti-inflammatory properties. As Greek Orthodox Christians they fast for almost half the year, reducing calorie consumption by about 30 per cent.

A Blue Zone recipe for longevity?

Observing the blue zone communities it is clear that no single thing can explain longevity. The centenarians owe their long lives to a combination of genes, geography, culture, diet, lifestyle and outlook. There is even variation in each group’s lifestyles and diets.

There are, however, practices that are consistent across all of the Blue Zone communities that may provide insight into living a longer healthier life.

People in the Blue Zones nurture strong social networks, belong to faith-based communities, and have a strong sense of purpose. They take time out to unwind, and incorporate daily, natural physical activity into their lives. Their diet is mostly plant-based, with plenty of seasonal vegetables and fruit, and a variety of beans, nuts, and grains. They eat in moderation and consume most of their food early in the day.

These people who live well into their 90s and 100s haven’t cut out carbohydrates, adopted the paleo diet, banned dairy and grains or taken supplements. They eat an unprocessed plant-based diet in moderate portions without strict dietary rules. They live in a supportive community with a sense of purpose and take time out to relax. They move naturally and are happy positive people. They love life and life loves them back.