Veggie the way to go for health and planet 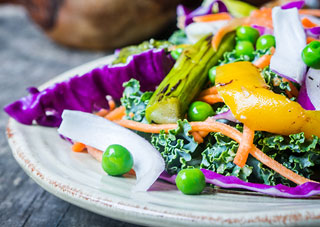 The largest organisation of nutrition professionals in the US has reinforced its position that a well-planned vegetarian or vegan diet is preferable to a non-vegetarian diet in a number of ways.

In an update to its 2009 paper, which laid out a similar stance, the Academy of Nutrition and Dietetics highlighted the reduced risk of developing chronic diseases later in life, as well as the reduced environmental impact of eating plant-based diets.

While some previous studies have shown a link between vegetarian diets and increased health risks, these have been attributed to nutrient deficiencies caused by inadequate dietary planning.

Paper author, Levin, concluded: ‘If you could bottle up a plant-based prescription, it would become a blockbuster drug overnight. This way of eating creates an efficient energy source not just for the planet, but for our bodies. What other drug increases metabolism, lowers blood pressure, stabilises blood sugar, and instead of increasing the risk for heart disease or diabetes – stops it in its tracks?’

Source: Academy of Nutrition and Dietetics