Evidence about both the physical benefits, and the injuries, associated with CrossFit is often anecdotal. So what does the more scientific research have to say on the matter? 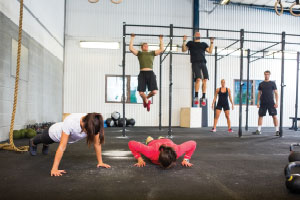 CrossFit, and the emotional enthusiasm that goes with this type of training, has polarised opinions within the fitness and strength and conditioning communities. Publically accessible indexed sites like Google Scholar will turn up numerous articles about CrossFit; however, in researching this article I have only used peer reviewed publications through scientific journals. Further, there are also a number of scientifically published articles on CrossFit injuries written in the case study format where the authors talk about one or two participants and their experiences with CrossFit, including topics like rhabdomyolysis (Rathi 2014), retinal detachment (Joondeph 2013) and tear of the latissimus dorsi myotendinous junction (Friedman et al 2014). However, as these don’t provide frequency of such conditions, it is difficult to truly value them, as we don’t know if the injuries were one-offs or if there were multiple cases. Consequently, case studies in which no rates of occurrence are provided are also not included in this brief review.

The common way of presenting injury data in sport is either as ‘injury rates’ detailing the number of injuries related to a number of hours of activity, or the injury prevalence reported as a percentage of respondents. The challenge with survey-type research is ensuring that a suitable number of people who participate in the activity respond in order to allow for a true reflection of injury incidence. When surveys elicit a small response, it is often the case that only those with injuries actually responded – which may mean that the number and rate per 1,000 hours is not a true reflection on the activity.

The 2013 study by Hak et al. reports survey responses from 132 participants and an injury rate of 3.1 per 1,000 hours of training, with shoulder and spine injuries more common. Weisenthal et al (2014) collected data from 386 participants and reported that males were more likely to sustain an injury, and that injury occurrence was just below 20 per cent of respondents, or 2.4 injuries per 1,000 hours of CrossFit. Similarly, shoulder and low back were the most common injuries – but were generally acute and mild.

While drawing on only a few small studies with low response numbers, this data suggests that injury rates with CrossFit training are similar to that reported for sports like Olympic weight-lifting, power-lifting and gymnastics, and lower than contact sports such as rugby union and rugby league.

Several studies have reported the acute metabolic, cardiovascular and physiological responses to CrossFit training sessions. Butcher et al (2015) compared two styles of CrossFit classes (circuit and HIIT between 58 males and females) and found that each class could be considered to be at ‘the high end of the guidelines for exercise prescription for health and fitness and may be effective for inducing increased cardiovascular fitness’.

Kliszczewicz et al. (2014) reported the ‘CINDY’ workout (one of the many CrossFit Workout of the Days) could be classified as ‘vigorous intensity’ based on comparison with ACMS guidelines for HRmax, and ‘moderate intensity’ for VO2max. This study used very low numbers (7 males, 2 females) with at least three months of CrossFit experience. Shaw et al. (2015) also used very low numbers (12 males) to measure a range of physiological measures and stated ‘CrossFit can be considered moderate- to high-intensity and is of sufficient intensity and safety to serve as a genuine time-efficient alternative to high-intensity interval training and conventional cardiorespiratory training.’

Kliszczewicz et al. (2015) compared the oxidative stress response in ten males to the ‘CINDY’ workout and a closely matched (time and intensity) treadmill workout. Results showed a similar physiological stress response between the two types of activity. Smith et al (2013) also showed that a 10-week CrossFit-based high intensity power training (HIPT) program improves VO2max and body composition in subjects of both genders, and across all levels of fitness.

Gerhart et al (2014) used 38 males in a cross-sectional study (comparing the response between two groups of 19 males) between CrossFit and traditional anaerobic resistance exercise. Across the seven domains measured (body composition, flexibility, aerobic capacity, maximum strength, agility, maximum power, and muscular endurance) the CrossFit group showed greater maximal strength than the traditional group, and there was no difference between groups across the other six measures.

With most studies using relatively small numbers and measuring mostly acute responses, a lot more research needs to be done to confirm the long term effect of CrossFit on physiology. However, these small studies certainly indicate that CrossFit can provide an alternate method of training that induces positive changes in a person’s physiology and fitness.

One final piece of interesting research that, to my knowledge, has yet to be repeated is reported in a thesis by Pratik Patel, 2012. The thesis, titled ‘The Influence of a CrossFit Exercise Intervention on Glucose Control in Overweight and Obese Adults’, involved an eight-week intervention comparing three CrossFit sessions per week with three days per week of aerobic exercise for 50 minutes, plus approximately 20 minutes resistance exercise on two of those days. The key finding was that even though the CrossFit group exercised for significantly less time per week (38.7 ± 15.6 minutes) than the Aerobic-Resistance Training group (190.0 ± 10.7 minutes), not only was there no significant difference between glucose control between the two groups, there were greater improvements in fitness in the CrossFit group. The CrossFit group included seven males and five females, compared to the other group which had three males and eight females. The uneven distribution in the groups of males and females may explain much of the increased changes in fitness in the CrossFit group, which has a dominant strength foundation – and literature suggests greater changes in males than females. However, this is an interesting area of research that may see increased potential over the next few years.

Apart from a few case studies reporting significant injuries, in the most part the published research shows a positive effect on CrossFit participants in either acute response or short term interventions. Injury rates, while topical, appear to be similar to traditional resistance training and, as in normal training environments, these reduce when coaching is increased. The current topic of conversation around the value in CrossFit, regards working at maximal levels under fatigue for extended periods, has yet to appear as research in the literature. There is certainly a lot of material available on the internet about the value of CrossFit, but most is unsubstantiated with no peer review process, or absent of any real scientific rigour. In closing, the limited body of evidence suggests that CrossFit training potentially has a number of benefits that match those previously reported for both resistance training and conditioning activities, and is worth considering as a training option.