A partnership between Australian Fitness Network, the University of the Sunshine Coast and the Australian Institute of Fitness, Fitness Research studies the populations, communities and environments related to the fitness industry, with the mission of improving the health of Australians through an improved body of fitness knowledge.
Research paper: Pressures to Perform: An Interview study of Australian high performance school-age athletes’ perceptions of balancing their school and sporting lives
Research team: Maureen O’Neill, Angela Calder, Bill Allen; University of the Sunshine Coast
Published: Performance Enhancement and Health; 2013. Vol 2, No. 3, pp.87-93

Introduction: There are increasing numbers of school-age athletes representing Australia at high performance levels in sport. For example, 17 school-age athletes represented Australia at the 2012 London Olympic Games, the highest number ever (AOC, 2012). These young athletes are subjected to countless stresses and expectations from both their sport and school. They may be considered ‘hyphenated’ individuals, striving to deal with more than one life (Fine & Sirin, 2007). Much of the research concerning athletes balancing study and sport has been problem-centred and examined issues specifically related to older athletes at college or university. Most investigations have not included the athletes’ views or given voice to their perceptions of how they balance two full-time lives.

This investigation focused on the personal views of both current and former high performance school-age athletes and had two main aims. The first of these was to understand Australian school-aged athletes’ perspectives about the issues and problems they face in juggling two lives. The second objective was to identify practices and strategies for best supporting these high achievers so they can perform to their full potential in both their educational and sporting roles. 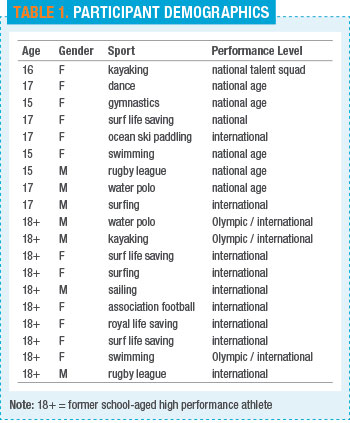 Data collection was through interviews using a Live scribe™ pen to record responses. Participants were able to voice their self-identified problems and lived experiences. SPSS™, Excel™ and NVivo 10™ were applied to analyse interview content. The findings from these analyses were categorised into five themes relating to issues identified by the participants’ reflections of the physical, social, educational, psychological and economic issues they faced.

Results: The following points are some of the key findings recorded in the five distinct categories.

The most frequent issues identified related to ongoing physical fatigue, and difficulties with time management. Common responses included, ‘I’m always tired and sore’ and ‘I constantly feel tired at school and I often fall asleep in class’. Most athletes mentioned they were continually rushing between training and school and this left them feeling constantly tired. However, the fall-out from the constant pressure to rush and perform was to slow down and waste time when opportunities arose. ‘I put things off; I push it aside to the end of the week’. Several mentioned that putting things off was an easy habit to slip into but that in order to perform well, ‘I can’t afford to procrastinate between schoolwork and sport.’

Wasting time on social media was a factor for several participants. One 15-year-old who researched her use of Facebook said ‘I figured out that I spent 26 per cent of my time on Facebook… so in Term two I deactivated my account and ever since then my academic and sporting results have increased’. However, social media enabled athletes to keep in touch with peers and friends, as many participants had restricted social activities due to training and competition requirements. Participants often referred to this as making ‘sacrifices’ for their sporting goals. One athlete explained that she always had to be in bed early and never went to ‘blue light discos or even an all night movie or things that kids her age would be doing’. Most participants acknowledged this was normal practice for a high performance athlete.

With regard to school, athletes spoke about learning difficulties due to missed class time and the need for more empathy from teachers. Missed class time created difficulties with trying to catch up on schoolwork. Some referred to the importance of mentors and one-on-one tutoring to assist them in dealing with the pressure of missed classes.

Bullying was a universal issue for female participants but interestingly none of the males mentioned this (O’Neill, Calder & Allen 2013). A tall poppy culture was suggested by some who identified jealousy as a reason for the bullying they experienced. Developing resilience and the right mindset were important strategies mentioned by several; ‘it helps to be in the same sort of familiar mindset with my other school friends who are athletes and who want the same as me’.

Economic issues for several athletes were associated with low socio-economic status levels of their families or the school they attended. Most athletes were concerned about the financial demands placed on their families as a result of their sporting requirements, as illustrated by this comment; ‘mum only has a job that fits around dropping and picking me up from training sessions’.

Summary: Results from this study support the theoretical concept of a ‘hyphenated’ individual – someone struggling to cope with more than one life. Despite these challenges, all participants indicated that it was important for them to pursue both their sport and education as doing well at both connected them with their sense of identity.

Conclusion: Recommendations from this research:

Schools, parents, and coaches need greater awareness of these school-age athletes’ views and perceived pressures. There needs to be improved monitoring of, and response to, tiredness, food intake, procrastination, bullying and social sacrifices.

Ignoring, or playing down, the problems faced by these school-age athletes may have serious repercussions for their health, welfare and personal happiness. These student athletes need resilience training and dedicated support at school.

Schools with high-performance school-age athletes should become ‘athlete-friendly schools’ in terms of policy and practice through specific pastoral care programs for these students.

For the latest fitness research findings, access the Journal of Fitness Research at www.fitnessresearch.edu.au/journal

Mark McKean from Fitness Research will be sharing his specialised training advice and fitness-specific research findings at FILEX 2014:

For more information on Mark’s sessions check out www.filex.com.au where you can also register for the convention or the all-inclusive Gold Pass packages that include access to the essential PT Business or Business summits and breakfast events.