A partnership between Australian Fitness Network, the University of the Sunshine Coast and the Australian Institute of Fitness, Fitness Research studies the populations, communities and environments related to the fitness industry, with the mission of improving the health of Australians through an improved body of fitness knowledge. 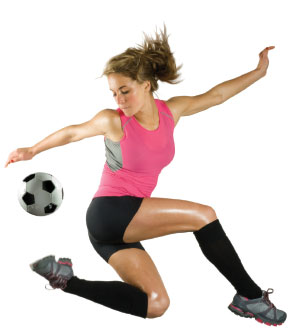 Introduction: Soccer is played in over 200 countries with approximately 26 million females participating in competition from the ages of six to 45. Soccer requires athletes to perform a large range of coordinated non-contact lower limb movements such as kicking, jumping, sprinting, cutting and braking. Although the skills required to play soccer are similar between genders, the physiological capacities of each gender may result in different game structures. A clear finding is that strength capacity is important for performance in soccer players. Developing maximal strength increases the force available to perform important actions of kicking, and specific movements of running, jumping, cutting and tackling.

Studies have shown that female soccer players have a higher risk of suffering both hamstring and anterior cruciate ligament (ACL) injury than male players. Suggested reasons from a conditioning perspective include decreased functional or conventional hamstring to quadriceps ratios, and muscular asymmetry. Further to this, inadequate joint range of motion and prior injury can predispose the athlete to future injury, particularly where rehabilitation protocols have been inadequate. Despite an extensive coverage of the hamstrings to quadriceps ratio in the literature, there is little agreement as to what is acceptable in both rehabilitation and performance environments.

The purpose of this study was to determine if a single 6RM squat score can predict strength ratios in female soccer players. The influence of joint range of motion of the hip and knee, injury history, training background and training frequency on this score was also determined.

On testing day one, participants performed the back squat and single leg standing hamstring curl exercises. On day two, (between two and seven days later) participants performed the prone hamstring curl and stationary lunge exercises. Participants performed warm up sets for each exercise by performing six repetitions progressively at 50, 85 and 95 per cent, with two minutes between sets, before commencing the first 6RM attempt. Rest of five minutes was provided between 6RM attempts sets to allow sufficient recovery. Although there were no significant anthropometric differences, data was analysed collectively and by mode of athletic performance, i.e. soccer or strength group.

Leg strength symmetry was achieved for both groups with similar strength scores between limbs and no statistically significant difference. Ebben and colleagues tested recreational collegiate athletes and also found similar lunge scores between legs as in the current study. In teenagers, a difference of less than 15 per cent was considered to be the norm for symmetry of strength and power. Accordingly, both groups achieved muscular symmetry, with differences between legs being less than 3 per cent, which is well within this range and can be considered normal. 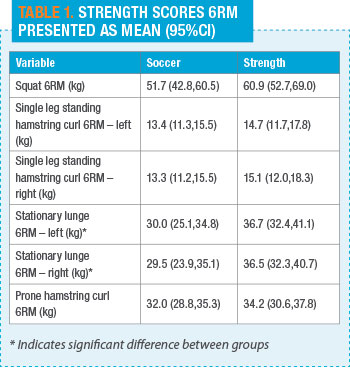 For the latest fitness research findings, access the Journal of Fitness Research at www.fitnessresearch.edu.au/journal

The current study showed that soccer players have similar bilateral strength profiles to strength athletes, even though they may have different training goals, such as balance and muscle symmetry. Differences in the standing hamstring curl strength between limbs was -0.6 per cent in the soccer group and 2.72 per cent in the strength group. This suggests the competitive level of the athlete may contribute to the level of asymmetry. The increased time an athlete trains and plays their chosen sport may induce a higher level of sports specific adaptation leading to asymmetry at the elite level, but not at the amateur level.

Conclusions: The findings of this study indicate that in amateur female soccer players and strength athletes, two bilateral to unilateral ratios using 6RM strength scores of the bilateral back squat and unilateral stationary lunge and single leg standing hamstring curl exercises may be effective measures of symmetry and strength. Having these ratios may aid the strength and exercise professional in taking the guesswork out of program and load prescription, ensuring their methods conform to best practice.