Although they may also be ‘functional’, movements in which ‘form follows function’ are defined by their mimicry of the natural function of the target muscles, writes fitness trainer and educator Tony Podpera.

The term ‘form follows function’ was initially used in architecture, meaning that the form of a building should reflect the use for which it was designed. It’s also a good rule for weight training for size and strength, meaning that an effective exercise for developing size and strength will always mimic the natural function of the muscles being targeted.

This is different to ‘functional training’, which, very basically, means training with the specific intention of becoming better at a particular activity (often a movement performed in daily life) and has been discussed at length in some recent Network articles, here and here. Rather, ensuring that form follows function simply means that you are doing the correct exercise, and doing it well, in order to maximise the training effect on the target muscle group, whether the end result is functional or not.

For example, not many people do an action that mimics a standing power clean in real life. It’s not a strictly functional move for most people. But if we want bigger traps, then standing power cleans are a great option. They expose the traps to explosive contractions, which are great for stimulating muscle growth. The movement uses the target muscles as they should be used – form follows function – even though we may not use those muscles explosively for any other reason (and therefore we probably wouldn’t do the exercise if we were doing purely functional training).

Understanding the concept of form following function, and applying it to the exercises you perform or prescribe to clients, will provide you with a very basic but valuable way to help you determine whether a particular exercise is likely to result in the outcomes you are seeking.

The vast majority of weight training exercises, especially free-weight ones, mimic real-life movements very well – and therefore might be deemed ‘functional training’ as long as they are movements that the exerciser performs in daily life. Take a bench press, for example. It uses the chest, shoulder and triceps muscles in unison to move a significant weight away from the body. If you had to brace against a wall and push away a large fridge, or you had to simply get off the ground from a prone position, or fend someone away in a football match, you would use the same muscles in much the same way.

The only concessions we make for the bench press exercise are to lie on a bench and force our hands into a position which enables us to hold a bar. Whenever we use these muscles in real life, we might not be lying down and we might not have our hands around a bar, but this does not detract from the target muscles working as they are meant to. The main point is that during a bench press, we’re using the muscles exactly the way they should be used, but we’re just doing so with a weighted barbell. Form follows function.

Dumbbell bench presses do the same thing, but with a slightly greater range of motion. Think of almost any exercise and it’s likely to be a case of form following function. A calf raise is another good example. Whether it’s done on a standing calf raise machine, a seated one, a leg press, as a donkey raise (a calf raise with someone sitting on your hips – yes, that used to happen!) doesn’t matter – it’s always an ankle extension, and that’s what calves do, so the form of all of these exercises follows the function of the target muscle: they just do it with more weight, more reps and more sets. 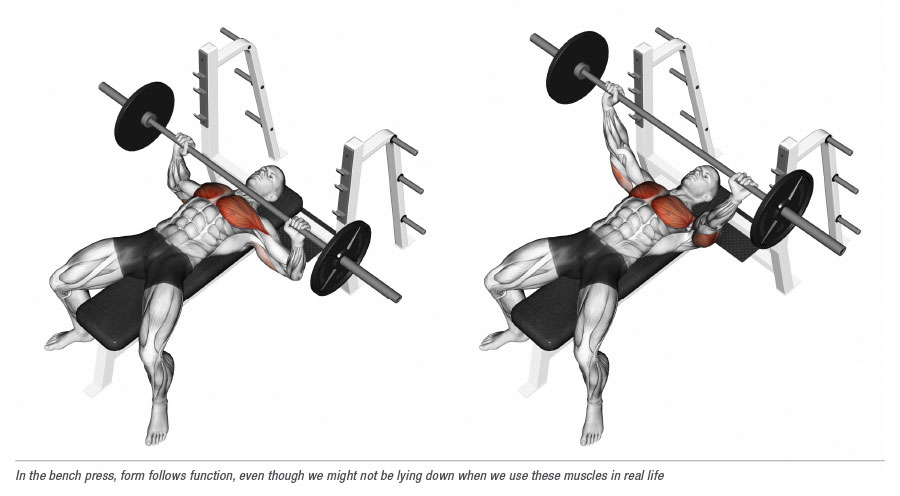 2. Form following function when it may not have to

The concept may become clearer if we look at an exercise in which form follows function, but for the purposes of weight training doesn’t actually have to. A good example is when the hand is pronated during the concentric phase of a dumbbell biceps curl. It’s not uncommon for trainers to advise that, since the biceps pronates the hand as well as flexes the elbow, a dumbbell biceps curl should also pronate as it progresses. It’s certainly true that a function of the biceps is to pronate the hand, so if form had to follow function strictly, a pronation should occur during the curl. However, there are some good reasons why it may not be advisable to pronate a dumbbell biceps curl if you are seeking basic biceps development.

Firstly, if you pronate on the way up, your hand has to be at least partially supinated at the start. You’d probably be starting the curl with your palms facing your body. That means that the first part of the curl would be more like a hammer curl than a dumbbell biceps curl and a hammer curl tends to use forearm muscles more than biceps muscles. Only when your hand supinates (turns) will the biceps be flexing the elbow and working as hard as it can be – but by then half of the exercise is over, and your biceps will only have been under load for around half the distance of the curl.

Secondly, if you supinate the hand as you perform a biceps curl, the supination becomes a counterweighted exercise. That is, while your supinating muscles may be working a little harder to raise the bottom end of the dumbbell (near your pinkie) as your wrist turns, the top end (near your thumb) is actually travelling downwards, countering the bottom weight and making the supination much easier. Finally, the part of the biceps that pronates the hand is relatively small. Supination is not a gross movement using a large amount of muscle, so if you want well-developed biceps it may not be worth adding the supination. In other words, if form completely follows function in this exercise, you are unlikely to develop the strength and size you’re after in the main part of the muscles you’re targeting.

The solution here is to supinate your hand from the beginning of the exercise. With a supinated hand and a fully extended elbow, your biceps will be working much harder through a much longer range of motion as you perform the curl. Form will still follow function to a very large extent – you’re doing a barbell curl after all – but for the sake of the ultimate outcome, you shouldn’t pronate your hand just because pronation is a function of the biceps. If you must work your supinating muscles, do so separately with a one-ended dumbbell or a cable, so that the exercise isn’t fully counterweighted (unless there are rehab or sports-specific reasons that a pronating dumbbell curl is programmed.) 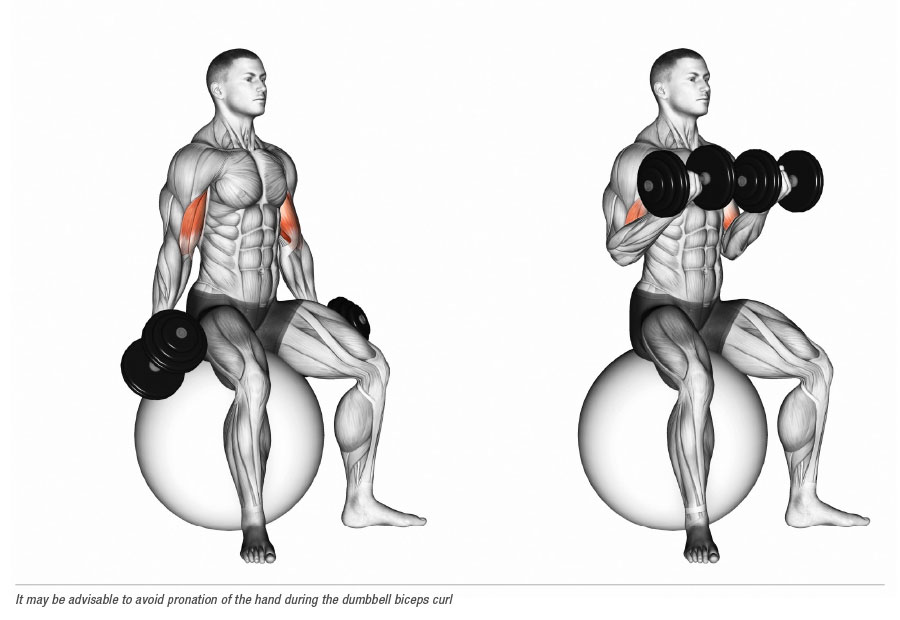 On, thankfully rare, occasions we see exercises in which form does not really follow function, and these movements are of limited benefit. One example is the one-armed, reverse grip, cable pulldowns for triceps. This exercise is sometimes championed by trainers who maintain that it isolates the medial head of the triceps. There are quite a few issues with this exercise as a strength or size builder (indeed, the terms ‘one-armed’, ‘reverse grip’ and ‘cable’ tend not to be used often in relation to mass or strength building exercises in general), but here we’ll focus on the concept of form following function. In the case of this particular exercise, it’s the use of a reverse grip which raises questions.

Now, in our daily lives, whenever we contract our triceps maximally (pushing a tree over, pressing ourselves up off the ground, throwing a rock or a javelin) our palms are either facing away from us, or into the midline. It’s difficult to think of a single movement that will maximally contract the triceps against force, where our palms are facing us, as they do in the one-armed, reverse grip triceps pushdown. That’s because our wrists have evolved to be able to withstand stress from a heavy load in the hand only when our hands face away from us or into the midline.

Our wrists can’t handle a large load when they’re turned towards us during a triceps exercise – the top of the wrist becomes a weak point, unable to protect itself from stress and pain, and too weak to transfer to the working triceps the resistance that the triceps would otherwise be able to contract against. It can also be a struggle to hold a bar tight when the bar is trying to escape through your fingers, as it would during this exercise, as opposed to pushing in against the back of your hand.

So, why would anyone hoping to build triceps size or strength do a movement which actually introduces a weak point, thereby limiting the amount of force the target muscles can generate?

The form of the one-armed, reverse grip, cable pulldown simply does not allow us to contract our triceps with a sufficiently heavy weight in our hands to stimulate a strength and/or size adaptation. The best size and strength builders for triceps remain dips and close-grip bench press, because they work triceps in unison and maximally, without introducing a weak point in the exercise. Incidentally, other questions one might ask about the one-armed, reverse-grip cable triceps pushdown, is whether the reverse hand position really allows isolation of the medial head of the triceps – and even if it does, whether it’s worth working a portion of one triceps one arm at a time at a weight that’s not as heavy as the triceps can carry. But I digress, so let’s get back to form and function.

Some other points to remember:

It’s not uncommon (especially among impatient young males) for people to tweak an exercise so much that it ceases being effective in terms of a ‘form follows function’ formula. Obviously, every exercise does something, but to get the best results, it’s important to ensure that the right muscles are remaining targeted and are working as hard as they can.

There’s not much point in form following function if the form is no good. A biceps curl is great, but if you swing the weights too much, the form of the exercise isn’t following the function of the biceps as much as it should.

Exercises exist in which, despite form following function, the movement may not be advisable for other reasons, depending on the individual.

Tony Podpera is a Canberra-based fitness instructor. He began bodybuilding in the early 1980s and has advised clients on weight training and strength and conditioning issues for over 25 years. Tony’s approach is based on old-school gym philosophy supplemented with the latest scientific research and with a bit of critical thinking thrown in.