Mums on the run – how soon is too soon?

The media loves reporting on celebrity mothers exercising shortly after giving birth. Rosemary Marchese asks whether all new mums should wait before they start running. 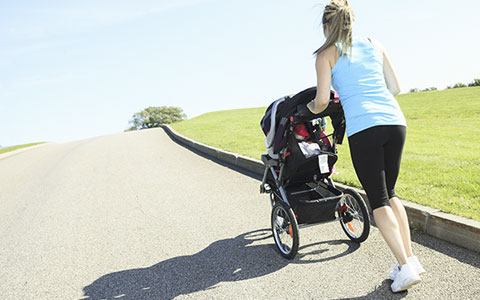 To run or not to run? That is a big question asked by many clients to their personal trainers. While the industry has generally shifted a little from the ‘don’t overdo it’ approach embraced during the postnatal period of yesteryear, there is still a bit of a taboo associated with running too soon after having a baby. So how soon is ‘too soon’?

The answer depends on a lot of factors, and no two mothers should be treated the same. Assuming the mother has had an uncomplicated pregnancy and delivery (whether it was vaginal or caesarean section) the major issues to consider post-partum include:

One of the major reasons mums have tended to stay away from higher intensity exercise, such as running, is because of the fear of affecting milk supply and taste. A lot of this has come about due to anecdotal ‘evidence’ from mothers who have said that their babies do not ‘take well’ to breastfeeding after the mother has exercised strenuously. This has led to concerns that excessive or extreme exercise could alter the taste of the milk. However, there has been little research done in this area because you not many mums would agree to exercise strenuously post-birth for the sake of scientific research!

Most mums only want to do light to moderate exercise postpartum, so the potential effects of strenuous exercise on milk supply and taste is not usually an issue.

The question of whether running is considered a ‘moderate’ exercise for your client will depend on the workout regime she followed during pregnancy. If she has run during pregnancy, or through a good part of it, then going for a light jog or run at some point postpartum may in fact be ‘moderate’ intensity for her and might not affect her breast milk at all.

The biggest issue in regards to breastfeeding actually often pertains to the comfort of running while her breasts are enlarged (and when the size reduces varies between mums). She may find it more comfortable to run with an extra supportive bra (some mothers wear two) or running soon after nursing. If she nurses the baby immediately after running, and the baby starts to refuse the milk, the mum may want to try something as simple as having a shower to wash the salty sweat off her skin, which could be deterring baby from feeding. When to start running postpartum, however, will depend on other factors too, not just breast comfort and the uptake of the child. Even mums that are very fit during pregnancy should start slow and light postpartum. 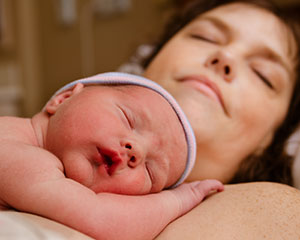 What about the pelvic floor, loose ligaments and posture?

Your client’s body has been designed to carry a baby through pregnancy and with that comes a big increase in hormone levels, especially oestrogen and relaxin. The ‘loosening’ of ligaments and joints that comes with pregnancy doesn’t just disappear after delivery. In fact, although a mother’s hormone levels drop significantly after giving birth, they don’t return to completely ‘normal’ levels for at least four months.

With these hormonal changes during pregnancy and childbirth come various postural and muscular changes, which may contribute to the weak pelvic floor and abdominal muscle weaknesses that most mothers experience post birth. These changes can cause pain in the lower back and pelvic floor regions as well as other problems such as incontinence. This is a key reason why most mums should not be running too soon after having a baby.

To put a blanket suggested ‘time’ for when it is appropriate to run after giving birth is not feasible. Pelvic floor exercises, such as Kegal exercises, can be resumed straight after delivery and mums can start light exercise such as walking as soon as they feel comfortable to do so and their doctor says it’s OK. But rushing into running or exercises where the client is asked to ‘bear down’ or place excessive pressure on their pelvic floor is not OK. So, until the strength of the client’s pelvic floor has been checked by their doctor or women’s health physiotherapist, it’s best to avoid crunches, planking and high impact exercise.

While you can’t put a timeframe on this for everyone, you can easily assume that running any time before six weeks postpartum is not recommended for most mums, and most mums might expect this to be at least six months to a year to give their pelvic floor the time to recover. There are possible exceptions to this rule but they are just that, exceptions. Unfortunately, too many mums are not warned about the risks to the pelvic floor and run despite urinary ‘leaks’. These women should definitely not be running until this issue has been addressed.

The other problem with a weakened pelvic area (muscles and joints) is the impact that it has on the strength of the abdominal and back region. You cannot run efficiently and safely with a ‘loose’ pelvic floor and overall pelvic region or weak back. This is when mums start to report pelvic or back pain and personal trainers are at risk of missing the real cause because they aren’t trained to diagnose.

What about the very fit mum?

If a new mother has a long history of high fitness levels, including a strong pelvic floor and abdominal musculature, combined with great posture and running technique, then sure, it’s feasible that running will come a lot easier a lot earlier postpartum for her than for most.

But that doesn’t take away the fact that she has experienced childbirth, either vaginally or through caesarean delivery. The nature of that delivery still needs to be taken into account. Vaginal tears, for example, still need time to recover (even in the strongest set of muscles!), and clients that have had a caesarean delivery also need to understand that the pelvic floor can still be affected. The pressure on the pelvic alone from the pregnancy, combined with the stretch of abdominal muscles during pregnancy and the trauma or physical strain of the delivery, can all impact pelvic floor and abdominal muscle strength.

All of the above considerations must be taken into account before prescribing running to new mothers.

Rosemary Marchese is a physiotherapist and fitness industry advisor with 20 years’ experience. She is the author of The Essential Guide to Fitness and The Fit Busy Mum: Seven habits for success. thefitbusymum.com.au