How effective is this popular training method with regards muscle activation, cardio health and low back pain? 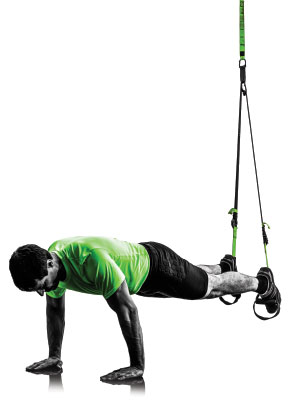 Suspension training exercises have become popular over the past five years due to their versatility and use across a broad range of environments and client training goals. Similarly, there has been an increase in research published about the effectiveness of suspension training systems, and in most cases the research provides good evidence to support its use. Here, we evaluate the findings in relation to suspension training’s effect on muscle EMG, the cardiovascular system and low back pain.

Electromyography (EMG) is a technique for evaluating and recording the electrical activity produced by skeletal muscles. It is performed using an instrument called an electromyograph, which detects the electrical potential generated by muscles when the nerve cells are electrically or neurologically activated. In movement science, the signals can be analysed to detect activation levels or recruitment order, or to evaluate the biomechanics of human or animal movement.

EMG is not without its problems though, as Carlo De Luca, a research scientist with the Neuro Muscular Research Centre and Biomedical Engineering Department and Neurology Department, Boston University, highlights:

‘Electromyography is a seductive muse because it provides easy access to physiological processes that cause the muscle to generate force, produce movement, and accomplish the countless functions that allow us to interact with the world around us. The current state of surface electromyography is enigmatic. It provides many important and useful applications, but it has many limitations that must be understood, considered, and eventually removed so that the discipline is more scientifically based and less reliant on the art of use. To its detriment, electromyography is too easy to use and consequently too easy to abuse.’

Remember that muscles produce active and passive elastic forces. Active forces require myoelectric activity and passive elastic forces require a stretch. During gross movements using large mobiliser muscles, surface EMG is fairly reliable, but with fine-motor movements and/or deep muscles, fine-wire EMG is required and is less reliable. The challenge with EMG data is in the interpretation and extrapolation of the data, not in the data itself. I believe EMG studies have a very real place in research, and as long as you understand the limitations of this type of research you will still find value in reading these types of studies. 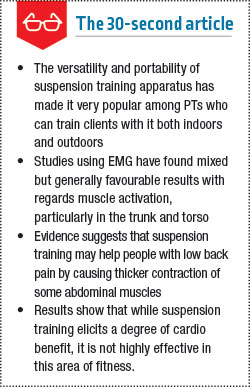 Many studies have utilised EMG techniques with suspension training. Nearly all studies have shown that when comparing the use of a suspension training system to traditional exercises, there is increased surface muscle EMG activity, especially of the trunk or torso muscles to support the unstable nature of the activity. This has been shown frequently in the following research:

It would be easy to take this to infer that suspension training exercises are more effective than non-suspension-based activities. However, a word of caution on the generalisation of such studies and use of EMG data: science still lacks consensus regarding a precise methodology that can be widely used to quantify muscle strength based on EMG. In fact, very few EMG studies actually measure muscle force output, instead simply reporting the EMG activity and comparing amplitude of the signals. Further, the effect of gravity and the effects of joint stiffness are also ignored, and these can be significant.

The evidence does support the use of suspension training to activate muscles of the trunk and torso in developing increased tension of this area, and to offer variety of exercises outside of the traditional approach to core training. Further, through the use of the unstable environment, research has shown that these muscles are more active during suspension training when compared to traditional forms of the same exercises. Evidence does suggest that to develop increased strength, traditional methods of strength training are superior, but in my opinion suspension training may be a great tool for simply adding variety or working clients who do not have elite strength-based goals.

Effect on low back pain

A number of interesting studies have used subjects with low back pain to compare the changes in thickness of the transverse abdominis after performing exercises both in suspension equipment and on stable surfaces. Very few studies included long term interventions, so it’s hard to determine the effect of such a program outside of the single session period used across most studies, which were often contradictory to each other.

Guthrie et al (2012) found that neither traditional- nor suspension-exercise-bridge progression has an immediate clinical effect on external oblique (EO), internal oblique (IO), or transverse abdominis (TrA) activation immediately after a single exercise intervention. Saliba et al (2010) showed the suspension exercise progression resulted in higher TrA activation during exercise than the traditional-bridging exercise. Min Yong Eom concluded that bridging exercises on a sling support surface would increase the thickness of the transverse abdominis and lower extremity muscle activities in rehabilitation programs for patients with back pain, due to the increased thickness of TrA contraction recorded in a single session of suspension training.

Overall this is still a relatively poorly supported field of study, and while current evidence suggests use of suspension training may cause thicker contraction of some abdominal muscles, the effect of long term use has not been verified in a quality study.

Snarr et al (2014) suggest that the TRX Metabolic Blast protocol (body weight circuit of nine activities 30 sec on, 15 sec off, followed by 1 min cardio treadmill sprint) could be classified as ‘moderate-to-high intensity’ exercise according to the established American College of Sports Medicine guidelines. While the workout elicited a vigorous intensity heart rate, only a moderate percentage of VO2 max was obtained.

In summary, there are still limited quality intervention-based studies on the use of suspension training equipment. Most studies to date are EMG-based and mostly in males. No studies have reported injuries or negative training effects to date and this may be due to the short period of time research has been conducted or the fact that there are no issues to report. This will become clearer in the long term. Certainly there appears to be good reason to use suspension training equipment with everyday clients. As another training tool, it can enhance both variety and muscle activation in the trunk and torso.